Cheilitis -- Inflammation of the Lips 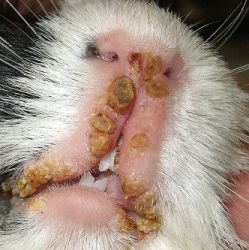 Most frequently these lesions are caused by a bacterial infection (typically Staphylococcus aureus) but there can be other causes like Candida (a yeast infection). A pox virus has been found in the UK which reportedly can cause cheilitis.

Brown and Rosenthal recommend debridement, culturing (both microbial and fungal cultures), cleaning with a mild antiseptic solution and using topical and systemic antibiotics safe for guinea pigs. Check for dental disease and treat if present.

Be sure to check the mouth for signs of fungal infection (thrush).

Treatment For A Bacterial Infection

Apply triple antibiotic ointment sparingly twice daily. Ointment contains antibiotics that are not safe to ingest so use very carefully. Daily application may be required to keep the infection from returning. Serafina Cupido has had success using the injectable form of enrofloxacin (Baytril) topically.

Barbara Osborn's 3 boars had been unsuccessfully treated for cheilitis with neosporin and silver sulfadiazine.

A cytology was done on the guinea pig with the most severe case. The vet took a swab and did a micro-stain in the office (4-5 minutes) and identified a yeast infection -- Candida.

Her pigs were prescribed Nystatin Suspension to be given 5-6 times a day by Q-tip. She was told it could take 2- 3 weeks to clear up but found the infection (which had been present for over two months) cleared up in only two days with only a small amount of crustiness remaining. Nystatin is both an oral and topical medication.

Both neosporin and silver sulfadiazine (SSD) were ineffective for Candida. 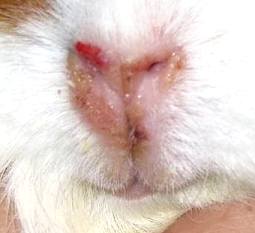 Along with the mouth sores, Becky's guinea pig, pictured at right, also had what looked a bit like cottage cheese inside his mouth. 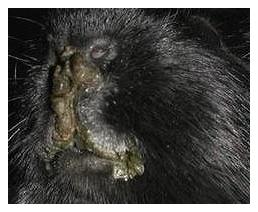 Brown and Rosenthal postulate cheilitis is caused by cuts and abrasions from coarse foodstuffs (but not good quality hay), bedding, or sharp objects in the environment which might allow a staph infection to take hold and spread. Dental disease and vitamin C deficiency may also be contributing factors.

Online research of human cheilitis indicates diet may be a factor. Make sure your guinea pig is fed nutritious foods and getting adequate B vitamins and vitamin C. 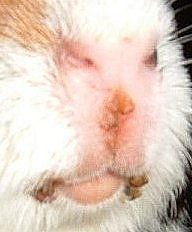 Top photo, thanks to mmercedesmom

Middle before and after photos, thanks to Becky.

Bottom photos, thanks to Davidmorrisuk (picture #1) and Nicola (picture #2).