And last but not least is Podrick Payne.

He'll be turning 2 any time soon (somewhere between Jan and March we think). He was adopted from webs as company for Anselmo and Jon Snow.

Although they currently live separately due to a nasty fight in Sept last year he really loves company, so he lives next door to Anselmo, with a perspex wall between them. He loves to watch him.

Podrick is a funny little guy. He was quite nervous for a very long time but is finally coming out of his shell.

He's our lap pig, although he does seem to like to pee on my boyfriend.

He's still quite quiet when he's out of the cage and doesn't do a lot of wandering during floor time but he's a completely different pig when he's in his cage. He has some very impressive dance moves when he's rumbling and possibly the stinkiest bottom in the world! 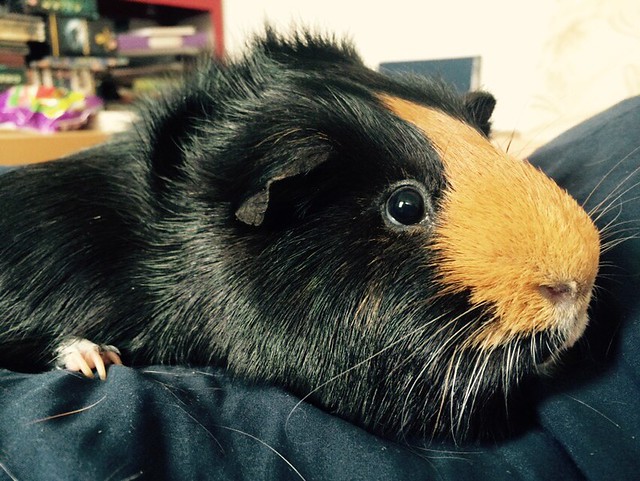 What a great bunch of guinea pigs you have - not to mention a very persuasive pig supplier!
Top

Ah Podrick. What a handsome boar. He's looking quite relaxed in the photo.
Top

He's getting so much better. I can stroke him and pick him up when he's in his cage, and he's getting much calmer at lap time. He does tend to get flatter and flatter when you stroke him though. Puddle o' Pod

I didn't get a photo of it (well I did but they're all blurry) but I was entertained this morning when at 6:30am I was greeted by Anselmo standing up at his bars waving his nose around looking for his breakfast. Sometimes we wonder how he's still around. 2 bladder stone surgeries, he takes 3 medications/supplements a day, and now he has a nebulister "steam" for 20 mins a day. Yet there he is, being the "sparky boar" as my boyfriend calls him.
Top

Aw, how sweet. Sparkly says it all, I think.
Top

This is what I come home too on a regular basis. Podrick Payne, the little monster. He took things to another level by flipping his box too, and managing to stand his tube up over the top of his pellet dish! 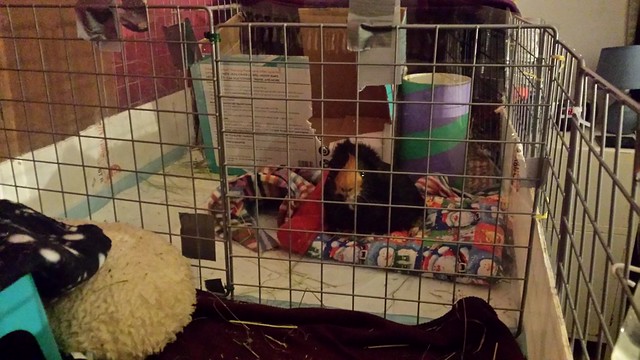 Not sure if this will work as I've not posted a flickr video before, but this is what my boyfriend has been spending one of his days doing:

Video worked! Loved it. Jon is way too cute!
Top

It's a busy week in our house that week, as it's Jon Snow's birthday on 15th June and Anselmo's Gotcha Day on the 18th June.

He still loves to rumble all the time, and is a very stinky bottomed boy but he is back living with Jon Snow again. They've been together for well over a month now!
Top

Oh my goodness your Abby! So cute I'm sorry you lost him. All your others are adorable as well
Top
Post Reply 411 posts