I kinda think you need more pics of Fuzzbutt, no?
Top

You mean piggy Mummy making poor fuzzy cry like that and causing Peek and scatter to have nervous break downs. Thankfully Peek could not hear her. Give Fuzzy a head scratch from us. Yes more pictures of all four.
Top

I think you've seen all the decent, unblurred, not-poop-filled, can-still-see-the-black-guinea-pig pictures I have, Lynx. Hahahaha. I'll see what I can come up with for all of them, though I have to warn you, I've not had them out on the furniture for any photo shoots so it's hard to get shots of either set of cagemates together. Maybe I can do that today, just to see if they'll stay together long enough for me to get off a few clicks. It's a gloomy very rainy day, but I'll push my chair over by the window for what it's worth.
Top

daisymae, Scatter causes nervous breakdowns, not has them. ;o)
Top

Poor Flossie. Today, as I was getting their Vit C ready, I heard a strange sound in the pig room. I went in and discovered Flossie hiding under their stool and several flippers were wet. So was she. She was pulling her normal BS and chewing on grids wanting the Tabs NOW! This time, she was up on the brick next to the water bowl, must have lost her balance and fell into the bowl. I'm pretty sure she blames me because now I can't get near her, not even to give her the tablet! I'll have to snag her tomorrow and try to get a look in her mouth, or at least her front teeth. She worries me with all of her grid chewing. Even with the heavy plexiglas and the lighter weight clear vinyl "covers" she still manages to find unprotected bars to chew on. Now she's stretching up and grabbing the ones at the top. I'm scared she's really going to injure herself one of these days.
Top

When I had my bar chewer, I had to put plexiglass all the way to the top.
Top

Thanks, bpatters. I was thinking the same thing and trying to figure out a way, probably using the heavy AND lightweight stuff. I'll be in there today working on the problem.
Top

pigs really know how to stress their owners out hahah
Top 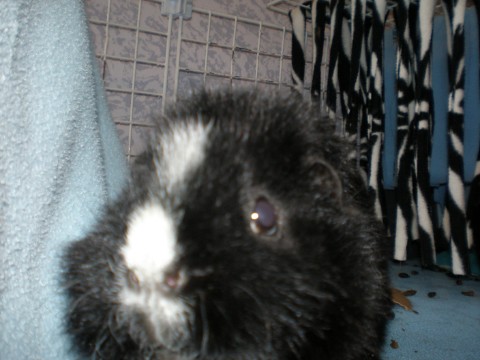 Not saying she's comfortable or anything, butt... 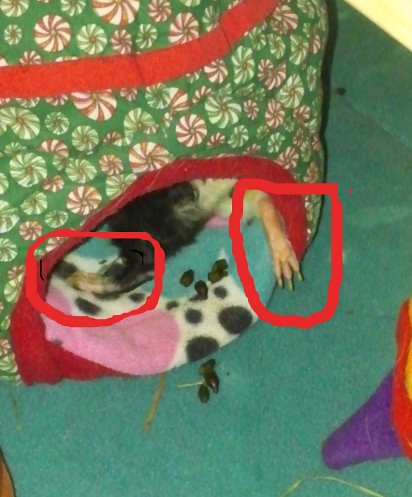 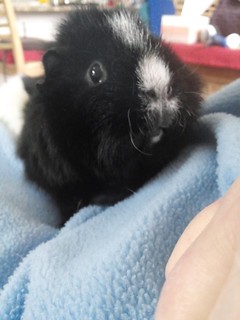 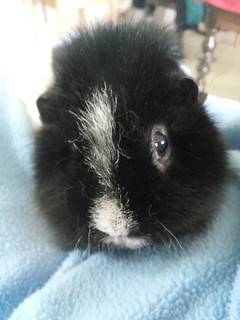 Aw, what a face!
Top

What a cutie! She looks so soft and fluffy. Those eyes are abdorable.
Top

chock had lots of fuzzy hair when i furst got him too. its a full glossy coat now.
Top

Maddy, Fuzz is the one who looks just like her name sounds - a big ball of fuzz. She has the biggest dark eyes you can imagine, and most of the time we ALL have to imagine them since she's got a mostly black face, and except for the shine, they're hard to see. I can look at her and know her eyes are on either side of the white "horn" running down her nose, but half the time that white streak is about all I can see. Makes taking good pictures of her difficult at the best of times. Such a shame since she is sooooo cute.
Top

I made some pads to put under the hay/kitchen areas for easier cleanup. That worked fine for a couple of months. Recently, though, first Flossie, then Scatter, discovered they could burrow under them, spreading hay from “H-E-double toothpicks to breakfast”, and under it.

Finally, a few days ago, I got tired of it. Why bother with the pads if they were just going burrow and sleep underneath, right? Well, I decided to put a stop to it by putting a brick dead center of the pad, and mounding the hay on top and around it.

That worked ...for maybe a day. They discovered the brick didn’t *have* to stop them, they could (and did) just go under the pad next to the choroplast, then circle the brick. “Yee Haw! We win!" Silly mum!

The next time I needed to change out the pads, I decided to put a brick on both outer edges of the pad, hoping to hold it flat enough to prevent them from getting under the pad. Score!

For Flossie and Scatter. >-<


Mangler is a also alive and well.

Fuzzbutt must have been having a very painful day a week ago, because when I picked her up to put her in the carrier for dinner, she bit me. *Hard* And kept biting me all the way to the kitchen where I feed them dinner - their cage isn’t big enough for two carriers and I need to separate all three pigs to make sure Fuzz gets only what she’s supposed to get, and Peek gets ~all~ of his dinner. Anyway, I had to carry Fuzz to the carrier in the kitchen, and it was: BITE, bite, bite, BITE, bite, BITE, bite all the way. I think it was a bite for each of the 10-15 feet I had to walk. She even managed to break the skin again.

I let her eat, then gave her the tiniest drop of Metacam I could pull up. I let her sit in the carrier for a little while, then picked her up and carried her back to the cage. I didn’t get bit.
Top

how strange. Your fuzbit reallly sounds like shes got atitude.
Top

Honestly, she's a sweetheart, Maddy. She does, however, have arthritis, and I have no doubt it's painful sometimes. When she was a baby, she bit out of fear. She's a little over 2 yrs old now, and only bites when she's hurt. Or afraid, which isn't often now that she's grown and used to me.
Top

aww poor little girly i know how horible it is to be in pain as i am in pain every dam day.
Top

Decided to put some sleepy pics up even though I haven't told VeBee's story yet. I'll get to it soon, I promise.

Not sleeping but too cute not to share: (Flossie - little brown butt & Scatter - big brown and white butt) 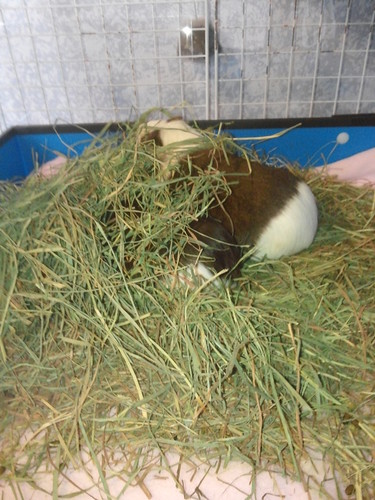 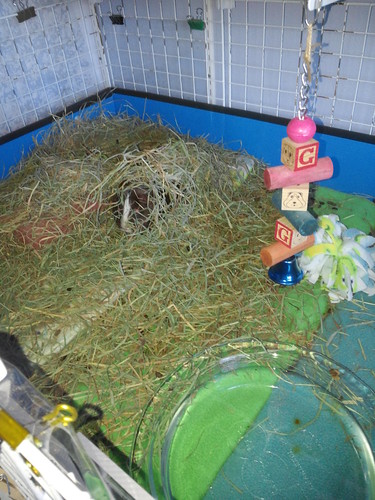 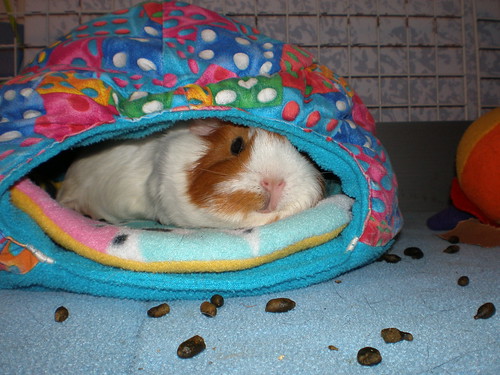 Last but not least, Peek and The Veeb: 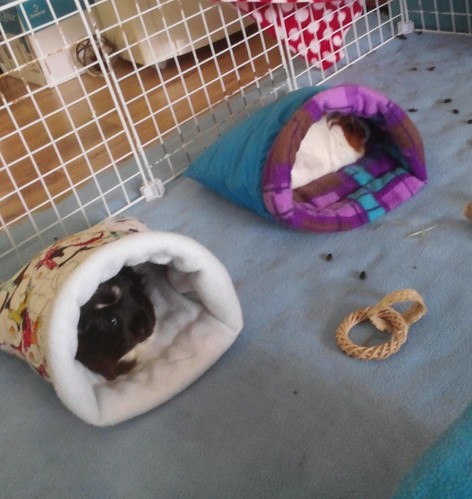 That is for sure an awfully cute little white butt!
Top
Post Reply 161 posts