WS, I was bonding Sammy with Emma Lou tonight and put her tunnel in the pen and they both are having a ball racing through it. When Emma was in the cage by herself she would just hide in it but no longer now that she's got a buddy to share it with. 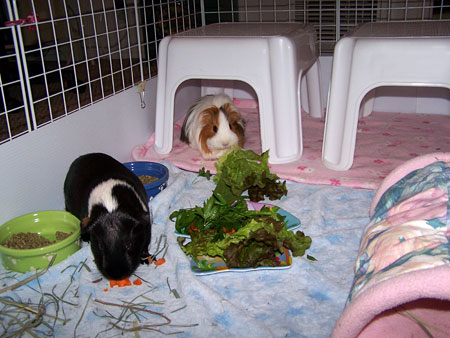 I saw that you are going to be gone from the 11th to whenever but your website has expired. Dont know if its intentional or not but I just I'd let you know that your website isnt working. Hopefully everything is ok and your website will be back so I can check it out!!! Thanks
Top

I think WS had multiple websites or did in the past. This website appears to be working: http://www.windespirit.com/
Top

Well, I'm still not sure what to say but I sure was surprised during my time out of town! And a extra surprise at the end of it, which I will tell you all in a moment.

Glad to hear things arrived safely to everyone with that crazy weather the other week.

Camende ~ your girls are just so adorable!! The tunnels look like they turned out to be a hit, that is great! I bet with a little time Ginny and Sweet_P will find theirs to be fun as well. Some times new things are scary ;) I'm probably to late, but coroplast that is high, you can also make slits in it, instead of cutting it down. I hope they've been working out so far for you.

Oh and pillow tosses (a.k.a. bonk your friend) are fun I hear too!

GPF - that is awesome to hear! A girl does need to play hard to get once in a while, hehe. They look like they are going to get along well, so happy to hear a tunnel could help their bonding have fun times :)


I did check on the site stats and there was some server down time for maintenance, my guess is from all the storms that week. The site is working as should be now, and orders are again being accepted.

Weaver - looking forward to seeing your new cage setup, I love seeing all the fun things you do.
Top

I mentioned a extra surprise now didn't I.

Before my trip, things were not looking to good, both Eric and I lost our jobs, me facing large medical bills, mandatory trip to Michigan, and losing Shakes (1st piggie) just days before leaving, not looking good at all.

Skipping drama to after all was said and done .....

Vinson will be sewing again this summer!!!!
He is with me for another summer :) He came up to me the other night and said he wanted to make another blanket. He also told me today that he might make some more of the pillows everyone found so soft and comfy, as well as some piggie pads. Last night I found him looking at some of the embroidery pictures, but he refuses to tell me what his plans are with those yet. Guess we will all find out soon. :)
Top

Oh yay! I have no idea who he is, but I'm excited for new stuff.

WindeSpirit, I love the canopy beds. I'm waiting for more fabric options, but that's okay because I'm tapped right now, but I just must try one of those for my kiddos.

Welcome home, WS! Glad to hear that Vinson is going to be helping again. Tell him the cats love his toys. :)
Top

Welcome home WS. I'm glad all went well and that Vinson will be with you : )
Top

Thank you GuineaPigFun and Bugs Mom! It's always nice to be back home. I think T-Patch was really happy to, soon as he heard my voice he started wheeking and waiting for me to come see him. I simply had to come see him before his ears flew him across the room. T-Patch is a ear flapping wheeker. :)

Vin's read this earlier and said, "Kathy is teasing me about kitties ... she didn't put a picture up!" I just giggled.

New Guinea Mom and others who are not familiar with Vinson, he is my son.
Vinson took a interest in sewing simpler things like Pillows, Pillow Pockets, Pads, and doing one larger special project, a blanket, that gets auctioned.
He started this when he was 9years old, this year he is now 12. Each year he has learned a little more and tries to (learn) help me with more things, today he's been helping me with Hammocks. It is nice being able to give him a summer time activity that he enjoys, challenging and giving him new skills. He does keep the money from things he made and has proved himself very responsible in that aspect. Although I still refuse to let him buy video games with it. I'm just a meanie.

Vinson's page is titled Child's Play. Their is not anything new up yet but his 2008 blanket is still posted at the moment on the bottom of his page if you'd like to see his handy work. There is also a page in the "Samples of Previously Made" that has a few of his other things. Some things I have helped with like embroidery in the past, usually I just stand aside, guide, and watch though. I got a feeling I'll be doing even less this year, he's on a role already!
Top

Vin's read this earlier and said, "Kathy is teasing me about kitties ... she didn't put a picture up!" I just giggled.

Okay, Vin ... here you go. Willie is in charge of quality control for all of the handmade items that the guinea pigs use. As you can see he takes his job very seriously. ;) 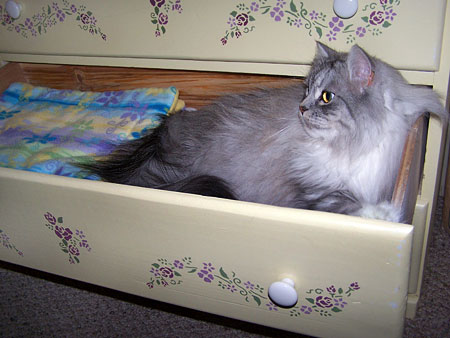 Vins said, " Awww. Thank you for the kitty picture! Is that the same one from mom's happy customer page? He got big. He's got a good job to."

I think I better get more picture printing ink! :)
Top

Is that the same one from mom's happy customer page? He got big. He's got a good job to.

Yup, that's Willie (see the photos below). I bet if you look closely at the two photos below you might see some familiar items (one of the photos is new to you I believe): various pads and a cozy sack. 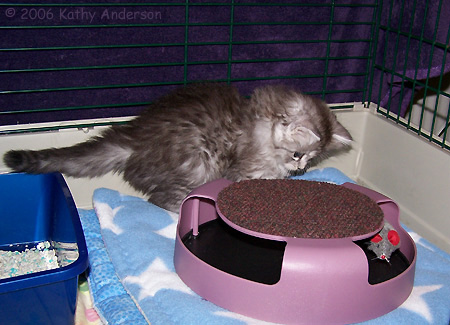 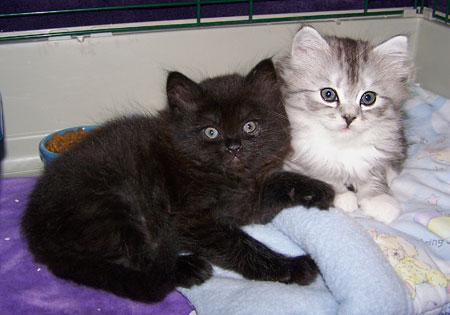 One thing though. There is a white mouse five feet from where I'm sitting and it's right in the middle of the doorway. I think perhaps you need to send Willie and Molly a reminder if they receive any more of your toys: Please remember to pick up all toys otherwise Kathy might fall over them. So far I have not stepped on it. ;)

Thanks for all of your hard work, Vin. You do an awesome job of sewing and the cats, guinea pigs, and I all appreciate your creativeness and TLC! :)
Top

I do believe I seen a smile from him when he read your post GPF. He also said he'll remember to tell the kitties because he doesn't want them to lose their toys!
Top 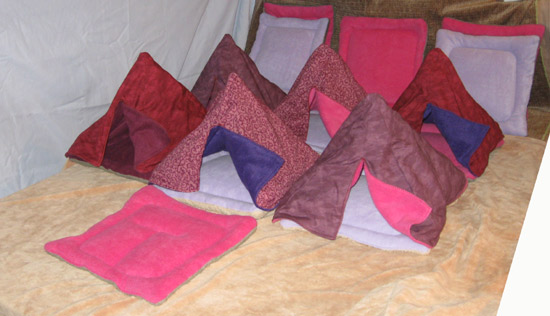 These only come in one size and are the perfect size to place the large 7"x7" square Blue Ice freezer packs under for maximum cooling through the day.
Top fabric is cotton only with an opening support, so to help air flow more and they can easily get inside. Fleece, batting, and flannel make up the bottom half.
The top can also be folded under to encase a freezer pack if wished since the opening support is flexible.
Prices vary between $8.99 - $9.99 depending on the fabrics
Top

Vins has finished a few things and would like me to let you all know.
He's pretty excited about his Cavy Coasters and with good reason, they look great!

He's also got a few things that can be either a Pad or a Pillow, your choice. Here's a peak at one.

A interesting twist on what started out as Corner Pockets, these are for Ferrets, Chinchillas, Rats, or Sugar Gliders to nestle down into. 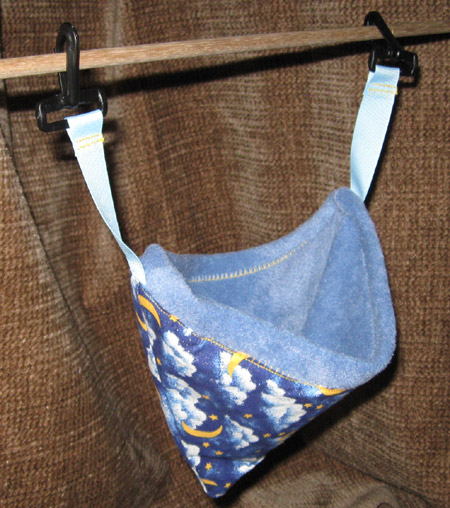 Some fun little pillows for all the wee ones that have Glow-in-the-Dark fabric on and a simple outline on the opposite side.

Everything can be found on Child's Play web page, along with a sneak peak of him working on the 2009 Blanket project.
Top

The Cool Pockets are a great idea. :)
Top

Wow, Vins has been very busy! Tell him that Willie approves of all of his handiwork. :) Good job!
Top

I have a question Becky. I suspect Lady Bug's canopy is now a "one of a kind" as I've never seen anyone else post pictures of their pigs in one. Is this true?

I lost Lady Bug this week and am giving her things to a rescue. I suspect they'll be getting something very special in your canopy - one of a kind! : )
Top

Bugs Mom - I had not learned of Lady Bug's passing yet, I am so deeply sorry. She will be greatly missed.
The canopy is one of three actually, the first one Frick and Snow still enjoy, the third one another member has. But Lady Bug's pad is a one of a kind indeed. No matter which number it is, there is nothing that can make it any more special then who it came from, you and Lady Bug, and that is one of a kind! {HUGS}
Top
Locked 983 posts

Return to “Fun for Guinea Pigs!”