I think I asked in a different thread, what is the concentration in mg/ml?
Top

Are you accounting for the fact that you're only using a half cc syringe when measuring the doses?
Top

Better to write 10mg/ml or at least include this info rather than just writing it is the 1% solution. People who do not know what this is in mg/ml may mistakenly jump to the conclusion that this is 1mg/ml.
Top

I wrote EXACTLY what the bottle said - nothing more, nothing less.
This is the same stuff I bought and use:

bpatters, I use the same syringes shown in the pictures at the above link.
Top

That picture is not of an insulin syringe -- it's a regular 1 cc syringe.

You said you were using a .5cc insulin syringe, which will have different markings. Insulin syringes are marked in units, not necessarily in ccs.

You need to be sure you're not giving half the recommended dosage.
Top 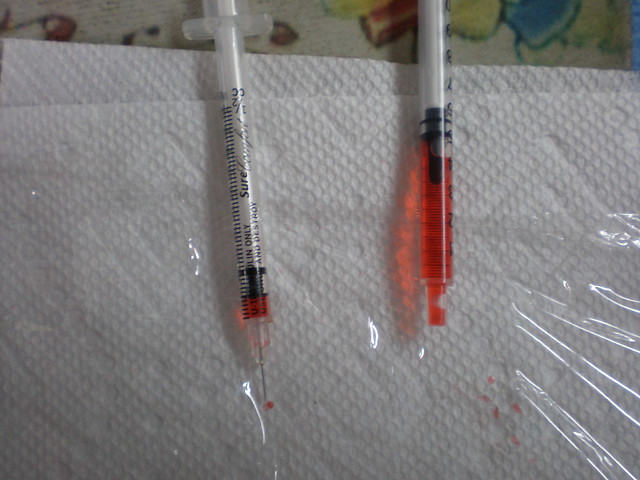 Yes, you want big drops like what would come out of the one on the right. That is what we recommend using. If you have been using the tiny drops from the dropper on the left, this may be why you've had problems all along getting rid of the parasites.

Somewhere on the box (or perhaps in the directions) it should have the actual concentration in mg/ml. The Durvet pour-on ivermectin I have doesn't use the percent method (which can be misleading and end up with people giving less than they should). It does only say "Contains 5 mg ivermectin per mL" which is the clearest method of describing the concentration.

I do understand this was not easily evident on the Ivomec box.
Top

Ditto Lynx. Insulin syringes are NOT equivalent to regular syringes, and shouldn't be used to dispense regular medications unless you've very sure of what you're doing.
Top

My husband can only find the "1% solution", also.

Now, I think I'm either going to throw up or kill myself. I prefer the latter.
Top

The 1% solution will work FINE. Don't worry about it.
http://www.guinealynx.info/calculate_dose.html#concentrationtips

Just make sure you understand there are 10mg/ml. That is the concentration (people, please, correct me if I'm wrong).

U-100 insulin syringe on left vs generic 1cc syringe on right. black lines indicate 5 units "insulin" on left & 0.5 cc on right. I'm not seeing a big difference in pic. If I'm reading the link correctly (my eye sight is at about 20% today) I've actually been dosing them with slightly more than recommended on GL calculator.
Top

1% solution of anything mixed in something reasonably close to water comes out to 10 mg/mL.

Don't kill yourself unless you really, really hate math. ;-)

The tricky part to remember is that the density of water is 1 g/mL, or one gram per milliliter. Most water-like substances are about the same, so now you'd have 1 gram of ivermectin in 100 milliliters of water(ish stuff).

Peek is still "coughing" even though I've kind of separated them at feeding time. He's now free to eat as slowly or as quickly as he wants. Tonight he left a good portion of his lettuce on the floor but was quick to help clean up the other 2's messes after they decided they were through (chewing on the grids and pushing them around, completely ignoring what was left on the floor or in the bowls). (Fuzz and VeBee decided that anyone else's food must taste better so they all switched places.) I've also been feeding them some "deer's tongue" lettuce, something my husband found at the farmer's market when I told him "NO more romaine!" Red and green leaf lettuce has been in short supply around here. Even in the grocery stores the quality is disgusting. Anyway, Fuzz won't touch the "tongue" so maybe Peek has decided he doesn't like it after all either. Not being a gardener, I checked my book and that lettuce looks an awful lot like "Oak Leaf".

Peek is scheduled for a re-check on Monday. If she still can't figure out what his problem is, I'll take Peek AND Fuzz up to Lacey to see the vet at The Farmhouse.

Also, he's decided the Metacam is SO delicious he jerked the syringe out of my hand and took off with it. I had to chase him down and take it back! (He takes it so easily any more, I've just been leaning down with the syringe and let him smell it, before he opens wide. I won't be doing that anymore!)
Top

That's happened multiple times at our house. Actually, don't worry about it because usually they drag it into a hide and drop it. They won't hurt themselves with it -- at least none of ours ever have. Just pick the hide up and retrieve the syringe, and give the med to the pig if he didn't already get it.

It's enormously useful when they like the meds (Metacam is usually readily taken at our house, too). Saves an awful lot of time and hassle having to chase them down and pick them up.

We also hear you on the lettuces. We usually feed redleaf and greenleaf primarily, because we too have had a lot of trouble with romaine. The quality here (metro Atlanta) has been dismal, too.
Top

Taste the new lettuce. If it is bitter, it might be high in oxalates.
Top
Post Reply 149 posts