That is encouraging! I hope she stays bright and cheerful!
Top 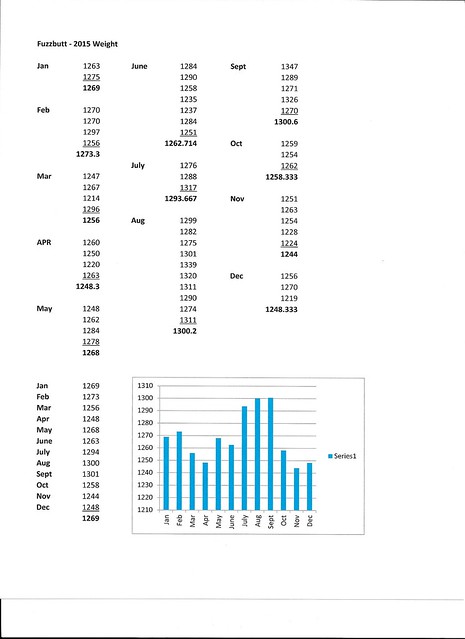 Finally caught up to Dr. W (part my fault and part his, that it took so long). He checked the x-rays I sent him, but couldn't really see them any better than my photos of the x-rays because they were digital. He said that most times if you don't have the latest software for that particular product, this happens. He sticks with film for that reason.

Anyway, after discussing her x-rays, we talked about her digestive system and how limited her diet has to be. I gotta say this doc does like to talk, and he's absolutely open to new information. Talking about ways to get Vit C into her led us to poop soup, which led him to say that this is something that he's NEVER heard mention at any of the conferences he's been to. When I added that you could take poop from a healthy pig and give soup from made with that to a different pig, he was REALLY shocked. He apparently has at least one other client with pig(s) who is just as interested in our pets' health as I am, and Dr. W says he also learns a lot from him.

I'm going to make an appt to take Fuzz and Peek back next month for film x-rays. I'll also be taking all the info I can find on heart pigs, because I strongly suspect Fuzz is a heart pig, even if I can't see very many symptoms. Of course, if the arthritis is throughout her body, it could explain a lot. Dr. W says that since guinea pigs are so small, by the time arthritic changes can be seen, the pig is already in excruciating pain. Hearing that, and thinking about it, causes ME to hurt for her. Poor little creature.
Top

Keep in mind the cecal feces (special stinky poops) are the best. Also, there is info on human intestines being repopulated by bacteria. Sometimes it is put into a capsule so it can get to the intestines and bypasses the digestive juices. There is some belief it helps - other belief (by vets) that the bacteria would be killed in the stomach by digestive action.

The point (as you know) is to try to get good bacteria in the intestines if there is an overgrowth of bad bacteria.
Top

We both know it's those "specials" that need to be used. I can't see a difference no matter how hard I try. Am I right in thinking that I really shouldn't be seeing many of them at all, since the pigs are supposed to eat them? I've seen the pigs hunch over and apparently grab one, I just don't see *it*. But, now that I think about it, I'm not sure I've ever seen Fuzz do it. Also, come to think of it, I almost never see her laying down in any position but stretched out. Curling up/over hurts maybe? Arthritis?
Top

If she's stretched out, in my experience she's likely not uncomfortable. If she prefers stretched-out to curled-up, that could be, at least in part, due to arthritis.

Bear in mind that arthritis, and how painful it is, is highly variable by individual animal (human included). You can have a pig with minimal arthritis on x-ray who needs more pain relief to be comfortable than another pig whose x-ray is much worse, but who isn't as uncomfortable. I don't completely agree with the idea that since they're so small, by the time it shows up on x-ray they're in agony. That's way too one-size-fits-all for me.
Top

Just a note to remind myself in case she does it again: I heard Fuzz actually squeak today several times. She sounded like a little mouse. No one else was near her; she was on her feet in a corner, totally still. I watched her for a few minutes, then continued cleaning the cage. Geez, my paranoid mind is thinking stones. She shouldn't be having a problem with those, although she does get cilantro every day. Otherwise, her diet consists of only leaf lettuce and carrots, perhaps a very small piece of fruit once a week.

Cilantro's like romaine -- it can cause excess urinary calcium in some pigs. I don't feed it to mine at all.
Top

I know, but other than pellets, she doesn't have any other Vit C source available to her. She won't eat Oxbow or human Vit C, except liquid form, and I'm having some challenges finding one that's reasonable with the sugar content.
Top

Leaf lettuce and carrots (plus Oxbow pellets; unfortunately they don't like KM's) is what ours get. No other regular supplementation and (touch wood) we haven't had problems yet.

If she really needs supplemental C, if it were me I wouldn't worry about sugar content. They need such a small amount that in my opinion if they need it, the benefit from the C outweighs the harm from sugar.

There's one out there (can't find it now, of course) that might as well be molasses. Needless to say the pigs love it. It's something like 500 mg/mL, though, so you're giving a tenth of a mL. In my experience that's not enough to cause GI upset in a pig that's not otherwise susceptible to it. (A pig that's had a stasis/bloat episode will be a different story.)
Top

Thank you! That's a relief to me. Fuzz has arthritis and can't tolerate Metacam (unlike Peek who is also arthritic and LOVES the stuff) so I tend to baby her. Well, she IS the baby, only 2 yrs and a month. I've handled her since she was 2 or 3 days old. Her normal diet is leaf lettuce and carrots, maybe once a week she gets a tiny piece of fruit. She LOVES KMS pellets. I suppose I should ask THEM this question, but YOU are here, heeheehee: Do you know the shelf life of their pellets? (Asking mostly for the Vit C in it)
Top

About nine months, I think.
Top

Thanks, bpatters. I will ask them next time I order, but I do appreciate the info now. I think 20# lasts me 3 or 4 months. I need to go back and check my file to be sure, but that sounds about right. I know, I was probably feeding too much. I've cut way back. Still feeding Fuzz's & Peek's cage too much because of dietary and age issues, but I've even cut theirs back. What I give them is all gone within 12 hours and they're still wheekin happy when it's time to put more down. They only get pellets at night, when I'm not available to put fresh hay down.
Top

I don't want to be a bummer, but: I can testify that some pigs will produce sludge and/or stones on diets so low in calcium you'd swear it should be impossible. Some of them just DO. So don't let your convictions overrule the evidence you're seeing, if you are seeing things that indicate stones.
Top

Thanks, AldenM1. Fuzz is my mystery baby. Can't give her any other veggies because they cause really soft and very smelly poos. Can't tell if she has really bad arthritis or just some arthritis, without new x-rays (coming soon). Can't give her Metacam or she goes downhill fast. Vet who took full body and head x-rays said she had bloat. GL experts say they can see GAS, just not Bloat. I trust GL more, hahahaha! I'll occasionally put her on the vibrating pad if I see a drop in poo count in the cage. If she produces some quickly, Peek get the pad. Unfortunately, (or fortunately depending,) Fuzz produces lots every time I hold her. I'm always finding them on the fleece pad, in my hands, or on the floor after I've walked with her. :o/ So if she's NOT producing, I can tell pretty quickly. (Not so much with the others, darn it.)

Is there anyway to tell (other than actual diagnoses of scurvy) if a pig is low on Vit C?
Top

Scurvy attacks connective tissue. A piggy that moves painfully, and/or actually has loosened teeth is likely low in C.

That said, they don't need much. A pig given KM's pellets and even a few greens is not likely to develop scurvy.
Top

Thanks, I know I'm a big worry-wart. Like the new med student who suddenly finds himself seeing nasty, deadly diseases because he has ONE symptom of them. ;o) I see them in my pigs, hahaha!

My new vet (the one in Olympia - Farmhouse - said he's about to take possession of a dental x-ray machine (film, not digital), and he's positive he'll get better definition with that, so we've decided to wait for more x-rays until then - less than a month, he's sure.
Top

I may have been dissing the wrong pig when it comes to smells. I sit here at my desk the last few days and even though I just changed the cage bedding a few days ago, the odor is nauseating. I'm wondering if I'm smelling boarfume. I actually had to cover the trash can holding the poops and hay from the dirty cages (I scoop twice a day usually) with another trash bag it was so bad. That was several hours ago and I can still smell it a little. I know it sounds like I just need to take the bag out to the trash can, but that's not true. This smell has just started (week or 10 days), definitely since I raised their cages off the floor.

All this time I've been blaming it on Fuzz, but I suppose it could be Peek (neutered boar). Fuzz is the one with the food-vs-soft-stinky-poos issue. I know she does have the issues; she's been a lot better since I restricted her diet to lettuce and carrots (a very small piece of fruit now and then, and a small bite of some new food I'd like to try her on). But I can't figure out why I'm suddenly smelling the discards so strongly. Hmmm, could be I'm the one with the problem, not the pigs. I'll have to pursue that thought more tomorrow.
Top
Post Reply 242 posts