Worst Guinea Pig carer in the world or the unluckiest?

I had to dis-assemble my cameras because kittens kept knocking them down and chewing on the cords. Chewing problem is solved but not the "knocking down".

We still have to put the tree up to see if we can "teach" them to stay out of it. Last year: 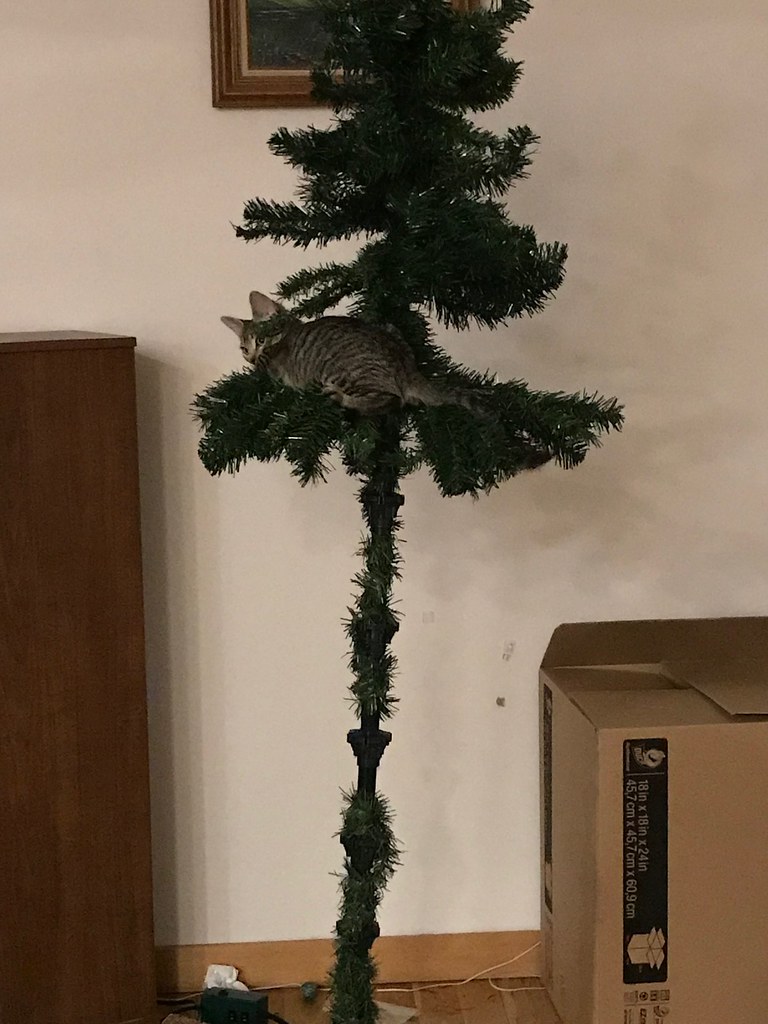 Nala chewed through the cable of the phone power supply yesterday. I suspect the daughter had unplugged it and left it on the floor when they were out for floor time. Nala is a chewer, we had to get new bowls as she was chewing on the rubber non slip ring around the bottom of our old one.

That is partly why I was wary of putting the camera near the cage or down too low.

The house sitter hasn't been in for training yet, but apparently has said she will send us pictures everyday and make sure they are properly looked after. Apparently she still feels guilty about the door incident in July that preceded the respiratory issues they had and is determined to make up for it. She also knows how much the girls mean to me and apparently is more than a little scared of me, cant think why. ;)
Top

That is just so funny, GrannyJu1!

p.s. I hope you have a great trip and am sure your girls will do great.
Top

So I think we are set.
House Sitter has been trained on cleaning and feeding.
Girls were weighed at the weekend
Suzi - 876g
Nala - 1051g
Chunkita - 1150g

Trimmed all of their nails (well the daughter did, she seems to have the knack)

Camera is set up

I think we are good to go . They appear to have been happy and healthy for a good few weeks now (touch wood) but still nervous about leaving them.

Happy Chrismahanukwanzakah, or what ever holidays you will be celebrating.

Will try and check in if I can but otherwise will catch up with you all once we are back.

Yay! Be sure to have fun!
Top

So far so good. Not back yet but the girls seem to be doing ok. The camera detected an escape attempt by one of the hamsters, Kali, but we were able to contact the house sitter who returned her to the pen and had taken steps to prevent any further break outs.

Too funny about the attempt of the jailbreak, but glad she was caught in time. I hope the rest of your trip goes as easily.
Top

That is cool that you could alert her! Those cams came in handy!!
Top

Back home now and all 3 girls seem to be doing well. Suzi and Nala put on a bit of weight while we were away (24g and 29g respectively) while Chunky lost a bit , down 28g. So all good.

The two Hamsters appear to be doing well too.
Top

Super! So glad they are all healthy! Probably a great relief to your pet sitters to have you home :-)
Top

Welcome back! I'm sure the critters are happy about your return.
Top

So a little update. No issues at present, touch wood, but some new developments over the last year.

Thankfully they appear to have been healthy and clear of the various issues they had in the past. I am pretty impressed with Nala as she is now the biggest of the 3, not bad going considering the vet at one point had told us to consider euthanasia when she was ill in September last year .

Anyway at the end of June this year one of our Hamsters died. A little while after that I came home to find not just another hamster but another Guinea pig (despite having had a long chat with the missus a while back about no more pets and definitely no buying pets from Petsmart). She had been told it was a girl but after a while it became apparent that 'He' wasn't a girl. I wasn't best pleased about her getting another piggy or the fact that she had gotten a boy (I am not entirely convinced it was accidental). We put a divider in the cage to keep him separate unfortunately he was able to get over this so we put him in a separate cage. After a week and a half I came home to find him gone and the missus said she had taken him back to the store, I wasn't particularly happy with that, having already bonded with the little guy, so she went and retrieved him.

The Missus and daughter said they would get him to a vet to get him snipped but for various reasons that didn't happen as quickly as I would have liked. Things came to a head when they put the little boy out for floor time with the girls about 3 weeks ago, just after another of our hamsters died. They were only together briefly as far as I can tell and they said that they were watching them to make sure they didn't get up to any funny business but it was still an unnecessary risk, I wasn't very happy about it.

Anyway Piglet, as we call him, got snipped Tuesday last week and is now recovering. He seems to be OK, still full of beans, and producing lots of beans, and eating well. His weight before the op was 1230g and the day after was 1138g but is now up to 1172g. He hates syringes so it has been a real chore to get him to take the Baytril and meloxicam. He has taken all the Baytril so far but wouldn't take the meloxicam last night (but had reluctantly taken previous doses) but doesn't appear to be in any pain. I have been rinsing his incision (at least I think I have as it is pretty difficult to see it) with a Hibiclens solution and he seems to be making a good recovery eating Pellets, Treats, Veggies and Wheat grass.

His last Baytril dose is tonight so once that is done it will just be a case of monitoring him and checking his incision and ticking of the days until the recommended 6 weeks separation is up so we can put him in with the girls as well as monitoring the girls to make sure there is no sign of him having been able to sow his oats before he got snipped.

Just curious but how long is it before I can stop checking on the incision? Any other tips on after care and monitoring?

Fingers crossed that he makes a full recovery and there are no signs of any of the girls being pregnant. If all goes well, touch wood, I may be able to breathe a sigh of relief around the end of January.
Top

Are you checking the incision daily right now? Doing a weekly health check is a good habit to get into for all your guinea pigs. In his case, I would actually add checking the general incision area at least weekly during this health check (ears, eyes, note secretions, skin condition, toe nails, etc. and make notes). We have actually heard of issues relating to a neuter up to a year post op so continuing an overall check of him is still a good idea.

As for the incision, I would monitor until healed more frequently and then put it on a weekly check. You would look for swelling, lopsidedness, or oozing of any kind.
Top

I am checking it but I cant really see anything. His skin is black down there so its a bit tricky to see anything but there is no sign of blood or anything else when we rinse it with the Hibiclens solution and it doesn't look swollen. Will keep an eye on it. He has finished his meds but we will keep weighing him daily until he is at least back up to his normal pre op weight and will keep checking when we do that. He isn't exactly cooperative and is a bit of a biter. He doesn't seem to have lost any of his feisty nature and is still eating and pooping well.

The only place were I did see a little bit of blood was further up his stomach where there looked like there was a small incision but that looked ok as well. Not sure what it is but I am assuming they might have nicked him when they shaved his belly.
Top

Adapting this hand hold might help you. Perhaps hold him vertically in front of a mirror, his back to your chest. A small bright flashlight can help you see his skin. Oh, and taking digital pictures does wonders for examination! A crisp digital picture can be enlarged on your computer screen to see if there is anything going on.
http://www.guinealynx.info/handling.html

It does sound like he is making a good recovery.
Top

I think I will try the pictures. I will hold him and get the missus to take the picture. The Other issue is my close up vision isn't that great, the glasses I have are OK for reading at about a foot away but not for anything closer. I hate getting older.
Thankfully he does seem to be acting just like he was before the op, eating, active, inquisitive and pooping well.
What makes me laugh is when I spot clean with the dustpan and brush he popcorns all over the place, licks and nibbles my hands and then climbs in the dustpan and sits there looking at me. I have never seen a guy get that exited over cleaning ;)

Looking forward to being able to pop him in with the girls in 5 weeks.
Top

Ummm, you can't just pop him in with the girls. You'll have to do full reintroductions.
Top

Yes, sorry just a turn of phrase. We have a plan for the introductions, neutral territory and all that.

They are within earshot of each other so they are aware of each other, lots of wheeking, and they also see each other each week (no contact but he can see them when we weigh them)

What I thought was cute was at one point Chunky appeared to have found a way out of their pen and would trot across to Piglets cage while we were out at work (I caught it on the camera) and spend about 15 minutes rubbing noses (she cant get in to his cage and he cant get out) and then would trot back to her own pen again. If it hadn't been caught on camera we wouldn't even have known.

But yes we know they have to go through full introductions again when the 6 weeks (Wheeks) are up.
Top

Here are a few pictures.

You can see what looks like an incision by the black patches further up his belly but that is not where I was expecting to see anything. 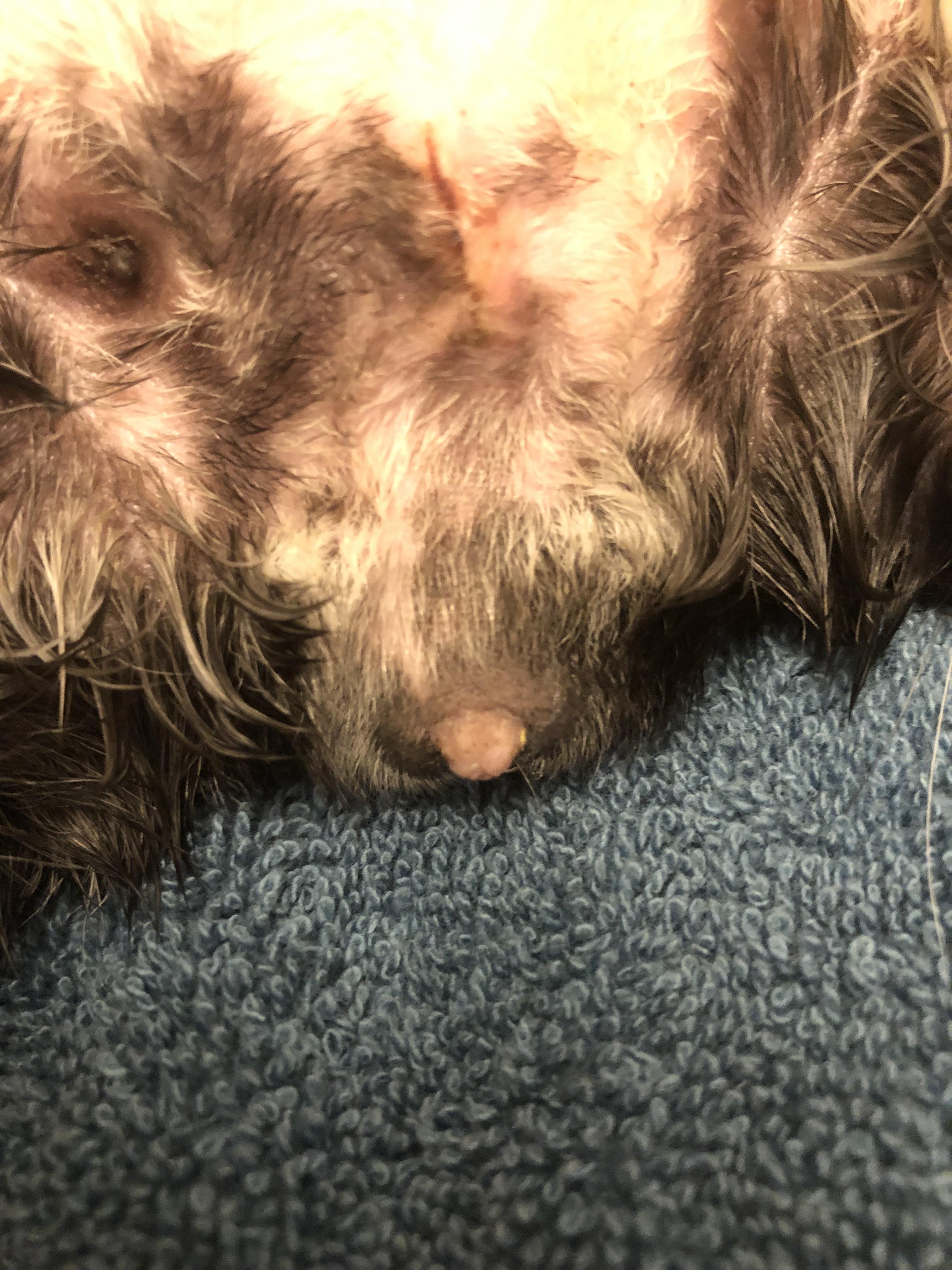 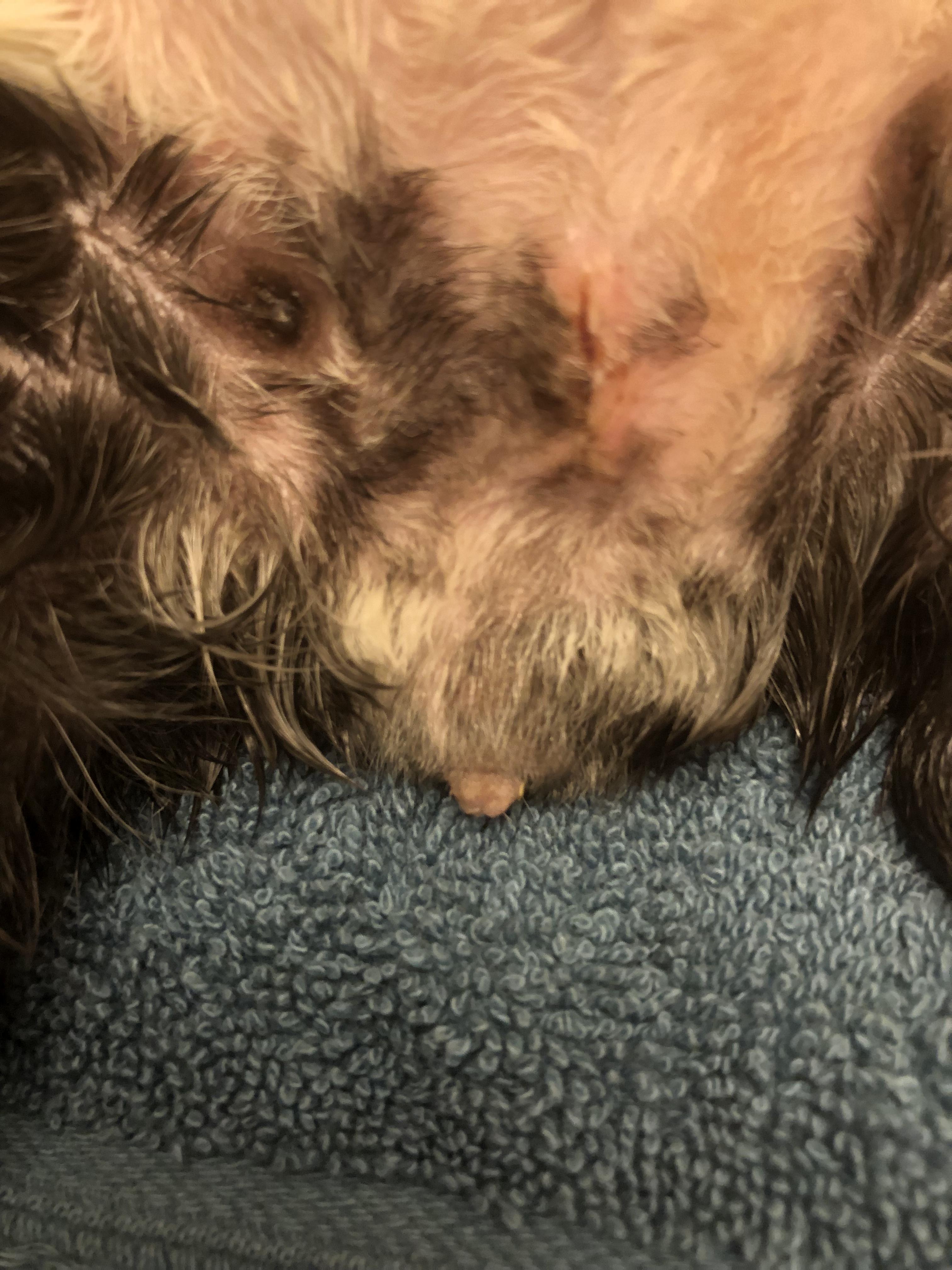 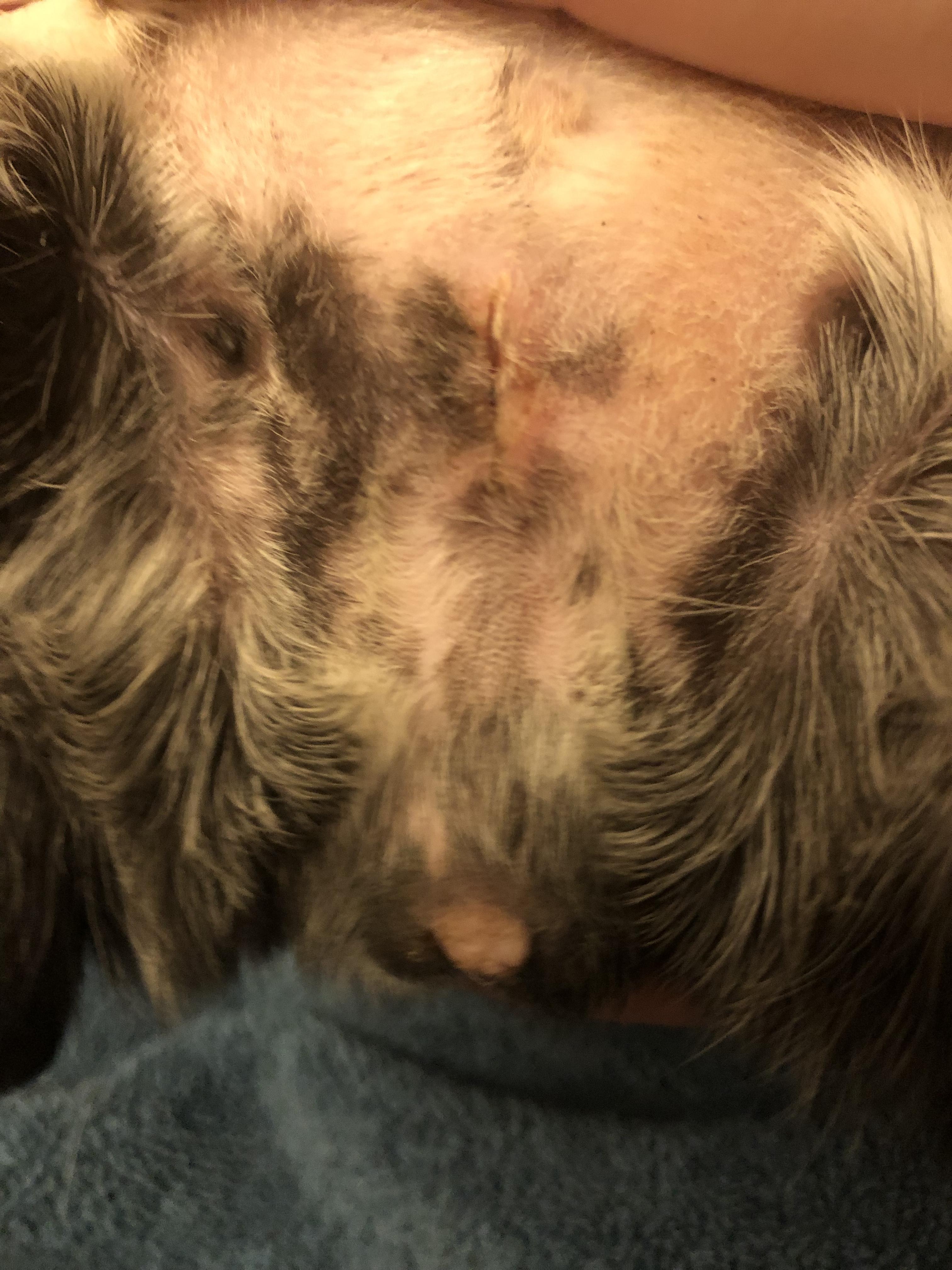