It truly never ends. Yet another pathetic situation to deal with.

This morning, I discovered a whole new batch of 30 filthy, severely mite-infested, guinea pigs in the holding room at the Peninsula Humane Society. They had already been there two days. Some look like Skinny Pigs or Baldwins there is so little hair left on their bodies.

They are being housed pending confiscation from their owner. The owner is currently being held at a county medical facility, due to her mental state. These 30 pigs: males, females and tiny babies, along with some mice were the only ones brought out alive from her home. They all lived free range. A large number of dead animals were also removed from the home.

I called Teresa in and we spent the rest of today getting the pigs housed adequately (out of the crowded 2&acute; x 2&acute; cages they were in) onto proper bedding, instead of sheets of newspaper, and securing medical treatment for them. Due to the shortage of staff and several other large scale seizures in recent weeks, these pigs had not yet even been sexed or looked over by a veterinarian. We gave them new water bottles to replace those that had been empty for some time, due to missing washers, and fed them. I took the fresh greens that were intended for the Hollister pigs dinner and gave them to these pathetic creatures instead. Some had no idea what to do with it.

We were not permitted to medicate the pigs ourselves, as everything has to be done according to the correct protocol, so as not to screw up court proceedings. We finally persuaded the overworked shelter vet to come see the pigs and allow us to dose them with Ivermectin. Teresa and Karen (our good friend from the House Rabbit Society) were still going at it when I had to leave this evening.

The pigs will be held for 14 days pending confiscation. Then what? A good question. They will be released to rescue. However, at this point we have NO clue where these pigs can go. The inn is full.
Last edited by pigpal on Sat Sep 07, 2002 1:37 am, edited 1 time in total.
Top

Tried to start taking individual photos at one point and gave up. They were by far and away the most super skittish, frightened pigs I&acute;ve come across.

Managed to get a few photos snapped--mainly at the end, after a long day. We had all the new cages jam-packed in and setup. It was a lot of work. After Jackie left in the early evening (and was probably still late getting back to her family again), Karen and Robert and I didn&acute;t get out of there until 8:30pm.

Here is the link to the album: http://imageevent.com/cavyspirit/bashelter

Here is a photo of the worst one. Many are almost as bad. Some are not too bad, but all have serious mites along with all the standard other problems you would expect. 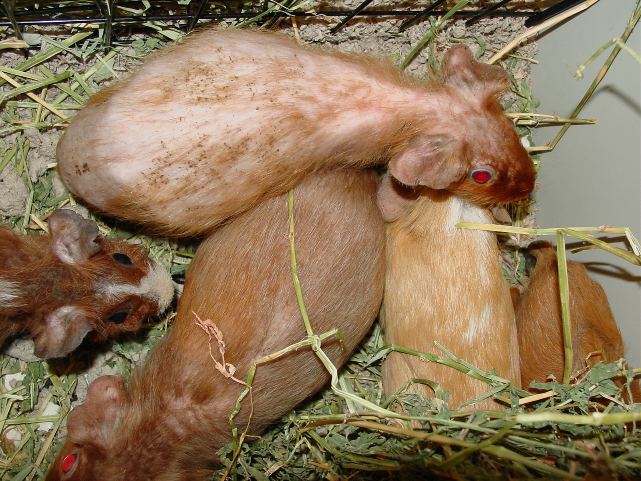 The cages--just before we left: 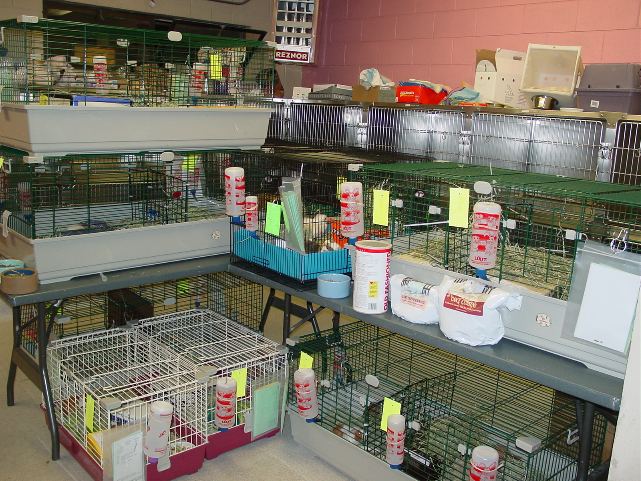 What&acute;s going to happen to them? I don&acute;t even have the energy to go begging for more foster homes at this point. Maybe we&acute;ll get a miracle in a couple of weeks.
Top

KarasKavies
For the love of my girls!

The toll this is going to take is unimaginable. I&acute;ll be there early tomorrow, Teresa - let me know if you need anything.
Top

Poor starving pigs. This is so sad. It does seem like it will never end.
Pinta, you need the one with the stripe down his face. There&acute;s something about him/her.
Top

When it rains it pours.
Top

I&acute;m ill. Where do all the sick people come from?
Top

I cross posted the information over to Cavies Galore in the Cavy Chat forum:
http://www.caviesgalore.com/forums/showthread.php?s=&threadid=18193
Top

OMG! AGAIN! This tears at my heart. I can&acute;t believe people that can live with this! I&acute;m truly speechless!
Top

The owner is currently being held at a county medical facility, due to her mental state.

Sounds like the owner was having some mental problems. I wonder if there was a history of mental illness, and if there was someone responsible for looking after this person?
Top

The Humane Society has been having ongoing problems with this person, over a long period of time. She is not at all well.

It&acute;s a crying shame the animals have to suffer too.
Top

*sigh*
Again? This is all so sad.
Top

You know what else is a crying shame? That a major, respected Humane Society is so deluged with animals, so lacking in staff, and has such an ineffective communication system that these pigs were left sitting in inadequate conditions, without medical treatment or even evaluation, for more than 48 hours.

I discovered them by accident, when I was dropping off some surplus pigloos in the Front Office. They would STILL be waiting for attention if we hadn&acute;t made a fuss and helped improve their situation by doing something.

I don&acute;t intend to criticize this particular Humane Society, I know they are struggling to deal as best they can with ALL the animals that come through their doors. ( Some 20,000 annually) These guinea pigs are but a small fraction of the animals currently being processed. There just has to be a better way.
Top

And while Jackie was there to see it and call attention to it and get help to make changes herself, how many times does this play itself out across the country every darn day? Putting down small animals in these kinds of circumstances is something that NO shelter is going to brag about or make public.
Top

The only offer I can make at this moment... if you know of any good adopter&acute;s between the Bay Area and the Tahoe (Truckee/Donner) area... I am driving out there maybe this Thursday... The next weekend I am headed to the Medocino are. I am willing to take pigs along if there are good places in these areas to take them. I know it&acute;s a long shot but...
Top

I saw these sweeties today. They were very small, very quiet and very sad. That one pig without the hair will be beautiful once she&acute;s healthy. She&acute;s a satin, you can tell by the small amount of hair left on her muzzle.

They were very happy to get the romaine, carrots and red pepper that Julie and I brought over to them. I left some extras with the people who work in the back.

Anyone who&acute;s seen them - have you noticed how some have such bulgy eyes? Especially some of the red eyed pigs? That really struck me as odd.

I took some pictures that I&acute;ll upload and post later.
Top

Jim and I will be bringing them some extra treats tomorrow morning.
I hope they are handling the fresh vegetables well.
The last thing they need is to get sick over new foods.
Top

The eyes aren&acute;t bulging - the skin is thin and lacking the fat/muscle that would normally puff it up. Ferdinand was like that when I got him.

The bulging eyes are from a receding body due to lack of nutrition.

They all have obvious necks too(like Ferdinand did) - another sign of lack of food. And you can see their haunches which means they&acute;ve lost the muscle/fat that would round them out.
Top

This makes me so sad.

Same thing I saw in St. Louis, Missouri.....However, I can&acute;t get anyone to help me on that, so the piggies are still suffering, while I wait impatiently, 5 hours away. I don&acute;t know what to do to help them. The lady I&acute;m in contact with won&acute;t respond to my incessant emails.