GPigsRSweet. Was it hard to find the turquoise coroplast?
Top

Those cages stay together okay without any zipties?
If you were referring to me, I also use zip ties on my cages. :) I can't imagine not having cable ties. I'd go insane thinking of a weak connector snapping and the cage collapsing while I was not home.

It's nice and sturdy using both connectors and cable ties.
Top

When people come to our house, they are amazed at the "giant" guinea pig cage in the middle of our kitchen. However, compared to all the cages in this thread, it is like our pigs (as my daughter said) "live in poverty".

I decided to post pictures of our pig condo (it isn't a cage) just because it is so different and maybe will spark a good idea in someone else.

We adopted two piggies from neighbors a two years ago. My husband hadn't wanted any new pets (we had gerbils) but when my daughter told him that the neighbors used to let the gps graze in the back yard without an enclosure because they counted on their two pet collies to "herd' them, my husband was horrified. When the neighbors announced they didn't want the pigs any more, he was the one to rush to get them.

The pigs came in a standard pet store wire cage, smaller than the custom cage my husband had built for the gerbils. We noticed that while they liked to explore the kitchen, they were basically homebodies who went back in the cage when there was no lettuce to be had. He set out to build them a larger, two story cage. Because we have no predators, he made it open on the top and bottom so they were free to "free range".

We didn't know much about guinea pigs and had never heard of this website, so this is what he designed. We made it fit in a corner of our kitchen so the piggies would always be in the center of our lives and never forgotten.

We kept the "pigloos" so they would have something familiar. The tangerine boxes are for hay. They love to nap in those. The old towels on the right are for picking them up with. We use shredded office paper for bedding. We collect paper from junk mail and work that otherwise would be recycled and use it for bedding and them compost it. It has soy based ink, so I don't think it poses a threat to them and the ink doesn't rub off even when it gets wet.

Here it is from the front:

Mostly they are homebodies but they wander out of the cage a few times a day to beg for leafy greens. If I am washing lettuce for dinner, I sometimes find one piggie sitting on each of my feet waiting for his or her share.

Here is is from the top, with Skittle showing off the hay box.

The black bag on the porch contains the old litter waiting to go to the compost pile.

I've posted this picture before, but this is Twix in his favorite place under the ramp. Odd, Ginger liked it there too but Skittle has never gone there.

What a cutie! You have a very creative cage. I love free ranging (so long as people are very careful - guinea pigs can get injured easily). This is my pigs' home from some years back (I no longer have pigs): gl/my-pigs.html

You might want to experiment with fleece bedding. Not as messy and much more absorbent than shredded paper.
Top

Thanks Lynx. You had a fantastic set up!!

We were worried about safety at first. We have a grate that goes over the bottom opening. At first, we used it every time we weren't in the room, but now we only use it if no one is home for a few hours. When the grate is on, Skittle always sits near it looking out, with a "hmph" look on her face.


We haven't had any safety problems in two years. The piggies really don't like to go too far from the cage. Skittle's former cagemate, Ginger, who crossed the Rainbow Bridge last August, seemed to have some vision problems, so she rarely went more than a foot from the cage. Skittle and her new roomie, Twix, are more adventurous and sometimes used to head for the adjacent family room, but we've been carrying them back when they cross over onto the carpet, so they've learned to stay on the kitchen floor - and there isn't much dangerous there. However, they do wander all over the kitchen, especially when they hear the refrigerator open!

I have tried fleece. I made Ginger and Skittle a sleeping sack. Ginger would rest her head on it but not go inside it. Skittle wouldn't go near it. Neither she nor Twix will step on that green dusting cloth they have in the cage. I also covered half of the top floor with fleece in December. When Skittle saw it, she froze and chirped at the top of her lungs for quite some time. I think every guinea pig within a hundred miles knew something was wrong. She ran down the ramp and refused to go upstairs again until I took the fleece out.

I guess Skittle has fleece- phobia. Does anyone else have that problem? I wouldn't mind changing over if they accepted it. I would love some of those cozy beds but I am worried they wouldn't use them.
Top

It took quite a while for my girls ( a couple weeks) to get used to some plush beds I had made for everyone. The boys took to them right away. Mama and Butters never used them. They would just go under them.
Top

I'm thinking of altering my current cage setup and I wondered if anyone had any good ideas.

I currently have a 2 x 6 set on to floor, which is split in the middle into 2 2x3's. The left side is the temporary cage for my new guy and the right side has all of the fleece etc in it.

I can't really go higher for a complete layer, as I have a shelf right above the cage (the cage normally has a roof on it) and I can extend it in length only by 1 (to make it a 2 x 7)

So, I'm currently thinking one of two things:

1) Make a small extension upwards, by adding a small loft which would sit on the left of the photo, on top of the book shelf (above the engraving art thingy in the picture)

2) Knock through one of the grids on the bottom, and make it a 2 x 6 again. I'd move everything in the right side so it was in the top instead. I could then make a loft in there, or extend out into an L shape on the bottom right of the cage.

On first glance, which sounds better, I really can't decide which one to go for. Can anyone see any obvious problems?
Top

I like your second idea, personally. It would give your piggies more room to run around without a ramp getting in the way. It would probably be a lot easier to clean than adding a level even higher than what you already have.

I'm finally on my way to giving my boys more room to play! All I need now is the coroplast and some zip ties, and I should have those in the next couple days. Yay!

I took a picture because I was amazed at how much more room is in the new cage. I knew their current cage was too small, but I never realized how small! 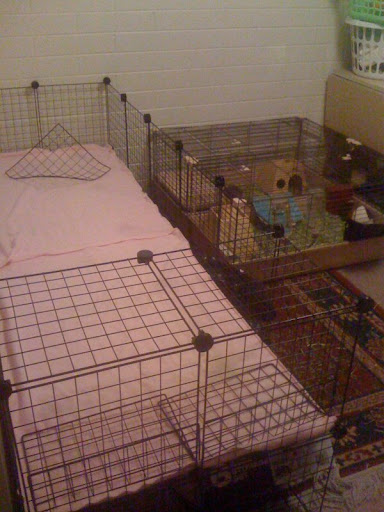 I just laid fleece out so the cage was easier to see. I can't wait for it to be finished! I bent some grids to make a shelf and a hay rack, and those will go up as soon as I get the zip ties.
Top

what do you put under the fleece to soak up the urine?
Top

I bought a big U-haul blanket I'm planning to use. I've used towels in the past, but I heard the blankets work really well. If I like it, I'm going to use it and some fleece to make cage liners. I'm still trying to figure out how I want to do the kitchen area.
Top

such great cages. I wish we had some of the space some of you have in your houses for your piggies. I am in complete awe and amazement! Every cage is so great!
Top

I think I need to for baby Zippy.
Top

I have a question. My fiance and I are looking at building a bigger and better cage for our three piggies, and I was reading about the C&C cages, but am wondering, will the piggies eat/nibble on the coroplast? And if they do, is it okay for them to do so?
We have never done anything like this before as we are newer owners and currently have our large store cages linked together to make for bigger space. We are very inspired by all these beautiful cages and are getting some ideas..
Top

Some will chew the coroplast, some will not. I have yet to see a piggie affected by it.
Top

Mozzie will absentmindedly chew on one corner, but it doesn't look as if he ever manages to ingest any of it, nor does it seem to make him sick.
Top

Great to know. Thanks for the responses. That was the main concern of mine, but because it's so widely used, I didn't think there would be issues using it. We're excited to start the process. :)
Top

EuropeCavys - I notice that the cubes you use don't have holes in, I've been thinking of getting some like this myself, I was just wondering how you attach the hay rack and water bottle?
Top

I have one pig who nibbles on the coroplast, not that he's really accomplished anything. It's tough stuff. In his cage, the coroplast comes up the sides very high and he's used to being in a cage where it was not quite as high. He could see all the action then. Now, he's frustrated, since he cannot look out. I believe that's part of the reason, he stretches to the top. And even then, he can't see so he takes it out on the coroplast. In my other 4 C&Cs, nobody bothers with it.
Top

Here's my cage from the summer before I put the litter box in.
Top

can't find my camera for pictures but took this quick video on my phone of the cage I just built for my babies http://www.youtube.com/watch?v=iCwWMdoKlXE
Top
Post Reply 379 posts