Guinea Pigs need to be INSIDE in cold weather!

Just a reminder to all of you and those of you who know of guinea pigs (or rabbits) that are housed outside. This is terribly rough on them and it is very important they are housed inside. Guinea pigs can and do freeze to death in cold temps with inadequate heat.

Inside - not an unheated garage or porch but somewhere it is at least 60 degrees or so.

LOCATION: Choose a bright draft-free room with a stable temperature range between 65 and 75 degrees F (18 to 24 degrees C), out of direct sunlight, situated close to household activities. The more your guinea pigs are part of your daily lives, the happier you will both be.

Do not house your cavies outside: Temperature fluctuations can be very hard on your guinea pigs. Predators sometimes break into cages. A guinea pig inside will receive better care as you will catch health problems more quickly.
Top

I am so pleased you mentioned this, Lynx, I had to venture out today and went past a caravan parked permanently on a verge outside the next village. A little dog was tethered to a small wood kennel outside. My heart broke and I am ashamed to say I didn't stop to ask what on earth they were doing, leaving that dog outside. You have to be so careful these days - I didn't want them following me home or causing me trouble, or worse. I did ring the RSPCA who promised to look into it.

Please, if anyone knows of pets being kept outside in this atrocious weather and you feel you can talk to the owners and offer advice then do so. If you can't bring yourself to talk to them and are seriously concerned about the animals welfare - contact the RSPCA.
Top

Yes, dogs don't deserve to be outside in freezing weather either. We need to think of all our pets and our neighbor's pets too!

I've been looking at the weather reports - lately pretty nasty. I think sometimes people think because they've managed in previous years that this somehow makes guinea pigs living outside right.

A responsible pet owner won't leave a dear pet out in the cold.
Top

To all the other wonderful contributors to this forum and website site I want to say thank you.

Sorry this is a bit verbose but if it saves a life perhaps its worth it. I’ve stumbled on something that for most of you is just so painfully obvious its not worth addressing but for some raised in more temperate climates we just may not appreciate the issue. Hypothermia is a life and death threat to these small animals especially when stressed. Other underlying causes or issues, although pressing may pale compared to how rapidly they will decline in less than optimum temperatures.

Wishbone our 1.5 yr old, 553 gram male has dry skin, sores from scratching and dander pretty much all over. Much of his belly hair is gone with his hair thinning most everywhere else. He still has a good appetite but has lost some weight. T-Bone a new 555 gram male roommate is also scratching but appears otherwise healthy. They get along pretty well but the once smaller T-bone can get a bit pushy over the food.

Concluding that Wishbone has mange mites. We used the Ivermectin horse paste to treat them both. We also treated Wishbone topically with ResiChlor leave-on lotion (Chlorhexidine 2%)

The first 48 hours following the treatments betrayed no outward adverse reactions but yielded the hoped for reduction in scratching in both pigs. Wishbone actually seemed livelier. Then came day three (yesterday) we awoke to find Wishbone having balance problems and sometimes making strange sounds when he breathed. My son observed he was lethargic and a bit cool to the touch. When Wishbone licked his hand, as he often does, his tongue wasn’t warm this time. T-bone on the other hand was his usual frisky self.

I dreaded an adverse reaction to the Ivermectin and or the ResiChlor. Wishbone was still eating and drinking and I hoped that time might allow any reaction to pass. Went to work and about midday came back to check on him. I found him in the most distressed condition. Laying on his side struggling to right himself. The unusual breathing sounds were continuous and labored. He had no control of his legs. I picked him up. He was cold and rigid. He slowly arched himself backwards in my hands.

If this seems a somewhat detached account and clinical let me tell you, I was panicking, I had this sinking feeling as I realized he was failing right before my eyes. He was going to die right there in my hands. I prayed to God to save him for my sons sake. I continued to hold him close trying to warm him up. I needed to get him warm. My thoughts bounced from a medication reaction, pneumonia, and his very low body temp. I needed to warm him up. I was afraid he might already have a respiratory problem and or that any added stress such as a warm bath might push him over the edge. I judged that his decline since the morning was so rapid that he would die soon if I didn’t take dramatic action. I bathed him in warm water to raise his body temperature and also to remove any remaining ResiChlor. After his bath I gently wrapped him up like a burrito in a small hand towel and set him on top of a second towel placed directly over the warm air of a floor vent. He looked terrible not moving, eyes almost shut his breathing labored and noisy, showing no interest in food or water.

I waited perhaps a half an hour then offered him a few ml of raspberry juice. His eyes were open, he showed some interest, his jaws were moving but most of the solution syringed into his mouth simply drooled back out onto the towel. A little while later he eagerly took, he tugged eagerly at a syringe of 6-8 ml. I offered him small pea size pieces of carrot that he struggled with but was ate a few, I syringed about 5ml of plain water which he reluctantly took. I gave him another 5 ml of water cut raspberry juice which he sucked up with much zeal. I offered him a couple tender pieces of hay and he chewed and ate them. His condition was improving rapidly, eating and drinking more and more. I unwrapped him and noticed he was able to lay without falling over, his balance better, yet his hind legs where still dragging behind him. Another half hour and he was waddling around with his hind legs properly set underneath him. I placed an electric heater next to his cage and returned him to it. I checked in on him a couple hours later and found to my delight that he had made a complete turnaround. Today he still looks great. I think I’ll delay the next Ivermectin dose till the 10th day to give him some added time to recover..

I lived in southern CA most of my life where it is very temperate even in the winter. I raised a few Guinea Pigs as a youngster and so thought I knew all that I needed to know. After all none of mine ever got sick, no mites, UTI or URIs. They thrived. I’m ashamed to admit now that I didn’t know the proper temps needed. Living now in Boise Idaho, I convinced myself they were inside and so would be okay, but we turn the house heat to under 50 while gone to conserve heat. I am convinced he would have died before we got home, had I not come home early, prayed and then promptly warmed him up.

T-Bone a healthy pig seemingly unaffected by the cold and Wishbone distressed by mites, hair and weight loss, recently dosed with Ivermectin, Resichlor and contending with the stress of his new pushy buddy T-Bone was at serious risk. A risk I didn’t appreciate. Hypothermia is real and life threatening. I’ve observed it.

Bought a Pet-ZZZ-Pad heating pad for pets 10lb and under. Says it heats to only 102 degrees when the animal steps on it. Wishbone and T-Bone slept on it last night.
Top

This is what my piggies did tonight when it was 65 in my house. They don't even like each other. Guess I better turn up the heat. Who knew it could get down to 21 in the Phoenix area?
Top

To warm a small cold animal, you can also put them on your bare warm abdomen. Your abdomen will stay warm and transfer quite a bit of heat to the animal (cover the animal also). This would be better than getting them wet.

Glad he recovered. Ill and compromised animals are particularly vulnerable to cold.
Top

Heat pads can be a useful item to have. When I have asked people to keep a hedgehog warm (when doing h'hog rescue) they have just put the hog in the porch. A heat pad, suitable for small animals, means the animal can go on it and more importantly, get off it, to keep warm. With guineas you have to be careful to make sure the cord is secured well out the way and not where the guinea can nibble it.
Top

Old pigs and pigs with arthritis may be especially sensitive to cold temperatures. My pigs are housed indoors and I notice they gravitate to the heat devices I put in their cages--and the temperature in my house never gets below 65.

Doofy uses a ceramic lamp that looks like this:

This is the bulb that goes inside it:

Mmercedesmom uses a different kind of lamp with the same bulb. She says it doesn't burn out the bulb as quickly because the heat disperses:

Doofy stays under this lamp a lot. Snickers is in an enclosed cage so a lamp won't work. She has this heating pad:

It is safe for small animals, they can't chew the cord. I put a small towel over it then cover with fleece. She lies on it all the time. Sometimes her roommate pushes her off and hogs it.

Rain has a heating pad draped over a bent grid in her cage. She stays under it all the time.

For new moms and sick pigs, some people use Snugglesafe: 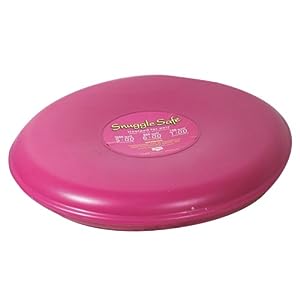 I would hate to see my babies cold, they love their warm spots so much!
Top
Locked 8 posts • Page 1 of 1