This week, I'm petsitting a guinea pig for the Orange County Cavy Haven for another fosterer, Caramel.

Caramel was abandoned in a park in Burbank (Los Angeles County, CA). He is blonde, weighs a whopping 1750 g (nearly four pounds.) And he has 24 toes--12 in the front, 12 in the back. Some of them are fused together and others are dangly.

I thought he was a random mutant pig but apparently there are other blonde pigs, huge, 24 toed pigs turning up across Southern California.

Polydactyly is an autosomal dominant gene. Breeders who deliberately breed guinea pigs with this autosomal gene are risking half-formed toes that are just soft tissue and a nail (which can snagged on something and get torn off, leading to a serious infection.)

Wee Companions spotted in a Petco in San Diego, CA.

The Avian & Exotic Animal Hospital in San Diego seems to have gotten two in this week: click here to see photos.

The A&EA Hospital contacted Petco to ask what the deal was. They reported: "My contact at Petco emailed me after speeking w/ their buyer who said the grower told them '. . . these are a new type of guinea pig that they are testing. They were excited to hear that people noticed and liked them.'"

Letter campaign in order, perhaps? Most abandoned guinea pigs and those turned in to shelters etc. don't have their nail trimmed and there are only 14, just what the public needs is10 more toe nails to not trim.
Top

Do you have a picture of this?

I'd kinda like to see just out of academic/morbid curiosity.
Top

I can upload pics of Caramel when I get home, but here is a pic the vet (from the above post) took of a different pig likely from the same breeder. Caramel's feet don't look as good as this guy's though. He's got danglers and some there the toe nails are fused together.

This is just crazy IMO. Let me know if you'd like your pics added to the thread permanently.
Top

absolutely disgusting what Petco is doing.

is there an RSPCA type organization you can inform about tis in thew US?
Top

You can almost see where they split apart. Piggies are only supposed to have 3 toes on the back feet.
Top

Lynx, unfortunately that photo above is not mine, but from a vet, so you'd have to get his permission to use it.

I can send you pictures of the pig I'm pet sitting but I don't know if they will be as clear as the one above.

But yeah, these guys have TWICE as many back toes as a normal guinea pig. Weird...
Top

Those poor pigs. It must be difficult for them to walk.
Top

I'd try to take good pics of the one you're pet sitting instead then. Any nearby guinea friends with good cameras?

I wrote a couple people who may know more about these imports (or may have heard about them). I wrote the person who did the Portuguese translation of the pamphlet and a person who recently inquired about using it. Hey, I should write our member who wrote the Spanish translation too. Maybe she can tell us something.
Top

I have seen several children at Children's Hospital, LA who had extra fingers/toes, sometimes fused. This syndrome was also accompanied by other defects including mental retardation. Do these guinea pigs have any other problems besides their extra toes?
Top

That's what I'm hoping to find out from writing people who may know more about these guinea pigs. If they can point me in the right direction, that would help.
Top

We definitely need to get a letter campaign going against this. I hate the majority of the human race sometimes, especially greedy breeders.
Top

Oh that poor pig, those feet are far too wide. I imagine they'd be better at swimming, but how often is that needed for a cavy.
And all that extra weight - I cant imagine how that works. Do you suppose the bones are larger, or more separation between them? That could cause a whole host of problems if they still have regular sized organs.

Are they being bred on purpose, to try to make a new guinea pig breed?
Top

This is too disgusting for words...
Top

Apparently they are being bred on purpose. The first one we saw in Wee Companions was in November. Djakarta pulled him from a shelter and we had him neutered right away, hoping to avoid passing on his genes.

Here are pics of Sasquatch. When Djakarta took these photos, he weighed 900 grams. He is now up to 1625 grams and the vet says he is NOT fat. He is big boned. He is like double the size of some of my sows! 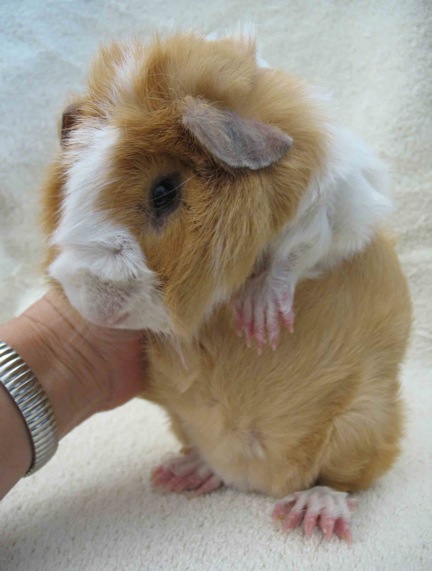 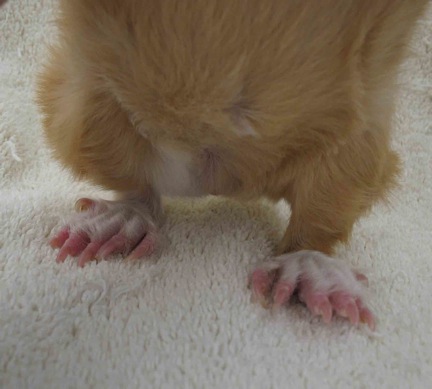 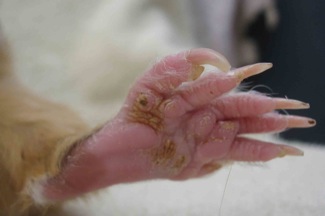 Sasquatch is now living with Cavy Castle and is playing nanny boar to two of Lauren's pups.
Top

Have you had Sasquatch x-rayed to see if he has any bone or dental deformities?
Top

Yes, as a matter of fact we did have him x-rayed (thanks to Cavy Castle) and the standard two views gave us a good look at his torso and legs. He is too long to get his head in the same pics.

His bones look fine at this point, although all are larger than the average piggy. His heart, stomach, etc. was larger too, but matches the size of the rest of him. His legs and spine look good, and the vet estimates he is probably just a year old now.
Top

I wonder if he'll have a shortened life span much like humans with big hearts and other spinal deformities.
Top
Post Reply 156 posts