Has anyone seen this? -- 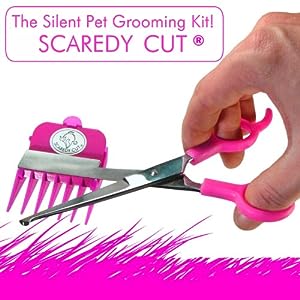 Hey, that looks useful for Fiona. She screams the entire time I'm cutting her hair. Not even carrots will calm her down. Maybe this would be better for us.

For some reason, I can't get the website to come up. My computer has been wonky today though. Do you have a price for it?
Top

That looks handy. I stopped cutting Dash's hair regularly because he would try and take off... each time he got worse, even with nummy veggies. BUT, if he couldn't hear the scissors he was fine. I would turn on my hairdrier to distract him while I snipped. Of course once he figures it out, he will scream and throw fits, obviously VERY unhappy.
It is usually a 2-3 day job.

cavyslave, the price listed on the website is 24.95 plus 4.50 priority mail shipping. (for the scissors and 6 different comb-attatchies). I assume it means USD. They say there is a 30 day guarantee... that if you are unsatisfied they will refund the shipping as well as the cost of the scissors.
Top

It got some very good reviews from cat and dog owners on Amazon.com here.

Cavyslave8 -- if you end up buying one, can you let me know what you think of it? I'm thinking of ordering one for Toby and Henry. Might also add it to TLPM if it works well.
Top

Wow, I would LOVE that for Lady Godiva. The poor girl is scared of her own shadow, and the sound of the scissors sends her around the bend. It looks like they don't ship to Australia, though :(.
Top

It looks to me like this is meant to be an alternative to the sound of clippers..not scissors? It still has two metal blades... still sounds like scissors? What it does not sound like, is a buzzing pair of clippers...
Top

Ohhhh, That looks useful! Not so much for the noise aspect, but for the comb that would lift the hairs up to be cut!

Henry spent the first 4 months of his life as a long haired show pig so he knows how to stand still on a brick for hair time. But I absolutely butcher his hair every time. I recently cut it all off for the 8hr car ride out here so he wouldn't over heat and he looks like a refugee.
Top

Ha! I know exactly what you mean, Feylin!

I gave Lady her first all over trim last week. It was just a short trim, to get the hair off the ground, except for her bum hair, which I cut pretty short. She was beautiful before I trimmed her, but now the poor girl looks like a ragamuffin.
Top

Thanks a bunch, Jadebeloved! My computer just would not cooperate yesterday.

I got mine today and tried it out on Fiona. She's a thick haired peruvian and isn't fond of her hair being fussed with.

So here's what I've learned after taking my time and trying it in different ways, in addition to watching the demo video:

Putting on the different sized combs was super easy. No trouble at all there. You can also use the scissors alone, without a comb. I did this and they worked just fine.

Starting out, I combed/cut with the grain of the hair. It helped me get the feel of the scissors and helped Fi get used to it. Once I had done that all over her, I started doing it sideways which actually worked the best for me. Especially around her rump.

Going against the grain didn't work for us. The scissors didn't work any better and she hated the feeling.

It gets easier to cut as the hair thins out. This makes it easy to get your desired length. After I had thinned it out a bit I went back over it with the grain to get an even length.

Overall, I like the Scaredy Cut but it's not a revolutionary tool that's going to make your pig love getting their hair cut, if they currently hate it. I do think it'll be great for our summer cuts here.
Top

Glad to see someone tried them! Sounds like we need more test guinea pigs. Very interesting to hear you describing "going against the grain" and "going with the grain".

By the way, I thought the demo videos were very cute.
Top

Thanks for the review, cavyslave8! I'm still debating whether or not I should get one. Based on the comb lengths, do you think I could trim an Aby but not make his hair too short? Or are all cuts going to be short?
Top

I think Momo should check it out!

Sef, I think you could absolutely use I on an Abby. Most of the combs were actually too long for what I wanted. I used the 2nd shortest one on Fi.
Top

Do you think it would work well for butt trims? Some pigs certainly need those.
Top

Yep, Lynx. I think it will. In fact, I'm using it on Cocoa today for just a butt trim. I'll report back about how it goes.
Top

Is it fairly well-made, or flimsy?
Top

Thank you for posting a review. I was wondering how it would work for Alistair who detests having the fur around his back end trimmed, which is of course where it is the longest.
Top

It's quite sturdy, sef. I have no complaints there.

Just finished the Cocoa butt cut test. It worked really well for her. She's a abby/peruvian and her hair is also longest near her rear. Her hair is also a bit finer than Fiona's, so it went much smoother. She was actually laying down for most of it.
Top