It blurred some when I cropped it, but as you can see the area very clearly in the un-cropped photo, I decided to use it: 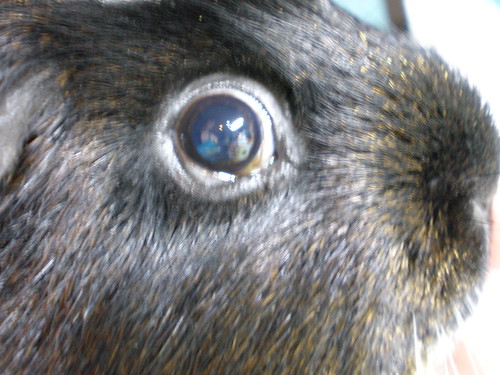 I agree on the whitish development at the top of the eye -- one of the osseous-es (for lack of a better way to put it ;-).

Pea eye can be a sign of heart compromise. Does he show any of the other heart signs?

"Reduced activity, lethargy" – No popcorning or lap running since he first got a cagemate 1.5 yrs. ago. When I separated them and he had his cage to himself for a little while, I did see some, but none since (when) he’s housed with any other pig

"Loss of appetite and weight loss" - No

"Enlarged heart on x-ray" – None noted, but we were looking for reasons for a limp, so…

"Difficulty coming around after being put under anesthesia" - Yes

"Deep sleeping, easy to pick up (does not run away)" - DEFINITELY not. He’s the least relaxed of all 5, and runs when I’m just talking to him.
Top

Then for right now I'd just consider that pea eye, that for now at least isn't necessarily serving as an indicator of anything else. ("Sometimes a cigar is just a cigar." ;-)

Without reading back, how old is he?
Top

Not sure; I was told when I adopted him that he was a year, but they were only guessing. He was definitely an adult. Going by his activity level and the intermittent problem with his leg, vets and I think he's probably closer to 4 or 5 yrs old. I've had him a little over 2 yrs.
Top

Okay. In my experience they can begin to sleep pretty soundly at that age, without any heart issues. That said, it's also a prime age to start having signs that one may be developing.

Keep an eye out for the signs on the heart page, but don't be overly concerned about it, at least not for right now.

Keep us posted and best to him.
Top

Thanks, Talishan. Will do.
Top

8/12 - I checked & attempted to clean Peek's ears. Not as bad as Fuzzbutt's, but pretty nasty all the same. Poor baby. He ended up with Cerumene down both sides of his head. But, on the plus side, his ears ARE a little cleaner. (Aside: I can't wait for my eyes to be legally-blind-55-year-old-100% again) He might be missing some brain matter.
Top

They hate repeat Hate REPEAT HATE having their ears messed with. But he will forgive you soon enough.
Top

Strangely enough, both he and Flossie seem to enjoy a gentle stroke down the ear. Peek prefers the cheek rub or chin scritch, but he doesn't object to the ear touch either. Or didn't. Flossie will actually half close her eyes when I stroke her ears, almost as if in bliss. Horror maybe? :o)
Top

She thinks you are a giant guinea pig that is grooming her ears. :-)
Top

Back to serious: Why would he cough quite a bit on Saturday, twice on Sunday (yes, really), not at all yesterday, then just in the hour that I've been up, he let loose with 3 or 4 coughs in one spurt?

Looks like it's back to the vet ASAP.
Top

Sounds more like he's inhaling dusty hay than anything else.

Have you opened a new hay or pellet bag? Used a different kind of bedding?

Is he sneezing? Any sign of labored breathing, gunk around his nose or eyes?

Pigs with heart issues can have difficulty breathing and eating (or drinking) at the same time. Not saying this is what it is, just saying it happens.
Top

Thanks, Talishan! For some reason, maybe it's because I feel he is much older than the others, when he acts in some abnormal way, I panic and fear imminent death. Ok, I do that with the others, too. :o}

As a matter of fact, I did just recently open a new box of hay. I managed to find some 3rd cut timothy, and tossed out the rest of the crappy 2nd cut I bought a month ago. They are really chowing down these days and as usual, Peek is the one sleeping in it also. I know how he feels: I love the smell of it!

So, as long as nothing is leaking, he's breathing normally, and runs from me just as fast as the rest do, I won't worry. Too much. ;o)

Knock on wood, he doesn't seem to be exhibiting more than a couple of your list of heart symptoms.
Top

Carry on. Third-cut is softer and while not necessarily dusty, they'll certainly stick their entire heads in it readily.

:'o( I think I heard Peek "hoot" today, just before I put him back into his cleaned cage. It was either a hoot or raspy breathing. Taking him to the vet Monday. A new one, but she's an owner herself, so she should know a thing or two. His cough still comes and goes, too.

How are you giving the Ivomec?
Top

Behind the ears, using an insulin syringe with the needle broken off.

Forgot: Today he jumped like I'd stabbed him. Checked to make sure there wasn't any of the needle still there to poke him with... Nope. He just hasn't liked me much since I started cleaning his boy parts. And his ears.
Top

Lungs and heart sounded clear so I asked for x-rays, which also showed them clear. She seems open to, and knowledgeable of. heart disease in guinea pigs, which I was glad to hear. However, she did learn 2 other things, neither of which explains his annual April-front-right-leg-limp.

X-ray showed some definite osteoarthritis in both hips, and dang it; I think she also said something about his right rear leg. Watching too many vet shows, though; might be remembering them. She gave me a bottle of Metacam for future use. 0.72 cc once daily IF eating and drinking normally (he weighed 1.2k there). “Ang Metacam 0.5 mg 15 ml” (1 bottle – dang stuff is expensive!! $55.50)

The other thing the x-rays showed was bloat. Not a really bad case of it, but it’s there nonetheless. (I couldn’t make heads or tails of them so I had to have everything pointed out to me, but she said she would have someone email me copies tomorrow.) They do look kind of similar to some other x-rays of bloated pigs I’ve looked at lately. The “coughing” I hear might very well be him trying to belch some of the air back out, especially since the one time I observed him cough, right afterwards I saw him kind of heave – whole body lurching forward half a dozen times after the noise of the “cough”. She thinks he might be: A) eating too rapidly due to the other pigs; or B) since it also happens when he’s NOT eating, it’s possible he may be trying to belch, and what I thought was a cough, is actually air coming from his stomach, not his lungs or throat.

Recommendations for the bloat: Acupuncture by a specialist in Portland she could refer me to (her first thought), then when I added heat, massage, vibration, she agreed. (I’m pretty sure she knows she’s dealing with someone who has a dangerous amount of knowledge: just enough to get into trouble! :o}) Crap! I forgot to ask how often! Suggestions? Another question - Is it possible for him to have had mild bloat all of his life? He's been a dry-crumbly-poo producer since I got him.

I’m to feed him separately so he doesn’t feel he has to rush (great – separate all 3 of them at feeding time!); avoid all the “wet” foods: cucumber, tomato, peppers. I think she means for me to feed him only veggies high in fiber; she suggested broccoli stems, not the florets, though… (Hmmm, looks like I start eating broccoli again.) I thought broccoli is part of the cabbage family and could *cause* gas. She approved lettuce, parsley or cilantro, and carrot. I can’t remember what she said about spinach, but since it’s “dry” it’s probably ok. I seem to recall an issue about calcium in spinach so I changed that from daily to once-in-a-while-treat. (I have noticed a definite decrease in deposits on the fleece, that’s for sure!) I guess I’ll put it back on as a once-or-twice-a-week item. I’ll try again to get them to eat celery for another change of pace. For now, I’ll stick with a raisin once or twice a week, as a fruit item. And look for other "safe" veggies we might have locally.

He’s to go back for re-check in 1 month, sooner if he gets worse. I’ve probably forgotten some things said, but I can’t help that. If I remember more, I’ll add it to the book. And now, it’s back to the research...
Top
Post Reply 149 posts