Fuzz has been exhibiting a few unusual behaviours the last week or 10 days, so I added her to Flossie’s appt.

1. Kind of pawing at the side of her face - like my dog did when he had a bone stuck sideways between his teeth. Seen just a few times. She kind of turns her head to the side, as if some food is stuck just outside the mouth and she’s trying to get it. Seen a little more often than the pawing. Ducks her chin a little when doing this.

2. No longer eats her whole Oxbow (timothy based) Vit C tab: drops it a few times, picks it up a few times, then seems to give up and walk away until I pick it up and give it back to her, but she goes through the same routine again - picks up, drops, walks away from it, etc. She might only be eating 1/4 to 1/2 of tab. Possibly related to #1 above, but she was also the one who absolutely hated the hay-based tab in the beginning, refusing it and wanting the orange pill instead. May need to see if she'll eat something other than hay-based.

3. Dominant behavior with VeBee (mounting occasionally). Fuzz has always been the MOST submissive of them all, preferring to hide in a corner and shriek bloody murder when an unfamiliar guinea pig touches or even gets near her. Her shriek at these times is THE most painful sound we’ve heard in a very long time. Ok, since I put VeBee in with them. Yesterday, she was with Flossie, who she can always see, smell, & talk to, but not touch.

4. I've heard some noise when we snuggle, not often, but more than once: a snuffling perhaps, or it’s a click of the teeth - not chatter, just one or 2 clicks/snuffles at a time. It’s hard to tell if it’s coming from her nose or mouth because I hear it for such a short time.

There's been no weight loss. She loves, and doesn’t skimp on pellets. As far as I can tell she eats plenty of hay. She has produced soft, very smelly poos now and then, but usually they are dry & crumbly - hard to tell if those are her's or Peek's, though. I suspect they both are producers - their fleece has always been the hardest to clean.

A little dander, not much, said nothing to worry about. We did notice some close barbering near Fuzz’s rear-end, but not actual bare skin, just short fuzzy hair (not new growth either).

Mouth – A good bit of food packed in back (didn’t say & I forgot to ask which or both sides); tooth or teeth have small points but with food packed in probably doesn’t bother her. No malocclusion that Dr. B. could see. She did say if necessary, or if I wanted, I could take Fuzz to another VCA clinic in Vancouver that does dental.

Ears – OMG!!! Absolutely full of black wax (black ears = hard for me to see inside). Dr. B. checked a smear and found 2 mites, so I’ll be treating all of them with Revolution (Cats with Advantage). By the time she was through cleaning both ears, there were huge chunks of wax everywhere. Poor Fuzz must have been almost deaf in the one ear. Wax softener and good pen light to be added to the GP Med Chest.

2. Monitor food and keep a diary of everything that goes in (except lettuce & parsley) and what comes out if I can be sure it’s her’s. (I think I’ll give her an hour or so in the changing box, a few times a week, to check her output. That little time won’t hurt her, and I’ll definitely know when something is off.) Won’t be able to monitor quantity of food she eats unless I feed her by hand so when I add something new to her diet, everyone will get that food during cuddling.

3. Check her fur closer for signs of barbering. Since this just started, I’m thinking VeBee is doing it. The area of haircut looks like it would be really awkward if not impossible, for Fuzz to reach.

Maybe this is Pinta's vet? He is excellent.

You are so nice and clear and organized! Your thread was a pleasure to read. You notice quite a few things. Your vet checked out all the things they should have and it sounds like you are on top of it all. My hope is that the ear wax and mites were the primary annoying issue and hope that the teeth self-correct (sometimes happens). You are quite observant and should be able to tell by weight and how she eats if they are a problem. The behavior change may be due to hormonal issues.

OMG, Lynx! Don't say hormones!!! I just had one little girl spayed! Both boys were spayed last year. I only have 2 intact guinea pigs left!

And thanks for the compliments. You all have taught me so much! You've taught me the questions to ask; the observations that count (sorry for all the uninformative information, lol); what to look for and where to look for it. I cannot thank you all enough. Thanks to you, I have 5 reasonably happy and healthy guinea pigs (and one husband who dreads most of my conversations, ROFL!), and I'm happy, too.
Top

Gave everyone their Vit C tab this morning. Both Fuzz and VeBee nibbled and left them. Not sure if they went back later, or if Peek ate them. Couldn't stand there long enough to watch them disappear.

Gave everyone a treat this afternoon: carrots. Fuzz took her's, I think she might have eaten one bite, might not have, then she dropped it and came looking for something else. I gave her a sprig of Parsley; she took it, nibbled, then left it. Decided to try lettuce; tore up several pieces and she ate them, but did leave some tiny pieces stuck on fleece rag I'd put her on.

Weigh daily for a while to make sure she IS eating (although I see her at the pellets and hay quite often). Everyone but VeBee has lost a little bit of weight since moving to floor cages. VeBee has actually gained. Probably because she has mates again.

Try to look at her teeth. She's a brat and doesn't like to be held. Cocoon-time.

If she leaves Vit C tab again tomorrow, offer her the liquid at feeding time. (And watch VeBee with her's.) Take fleece forest away if necessary, to watch.
Top

He is a sort of guinea pig dental legend. He advised my vet when Ginger-ale had tooth problems.
Top

Unfortunately, he's even further away and I doubt I could get my husband to drive us up there. He didn't want to drive half that far to visit out granddaughter on Whidbey. One thing is certain: I have to get my WA DL so I can drive me & my piggies around. Stupid eyes!!!

My regular vet at VCA Longview told me about another VCA clinic that does dental work. I'll watch Fuzz closely for a week or 2, less if problems become evident, then if necessary make an appt. with them. They're in Vancouver, WA.
Top

Best to her. Please keep us posted.
Top

I've been feeding Fuzz separately since the evening of the 16th. These are good examples of what I've been finding for probably most of her life. Missing so far are the really soft smelly ones. 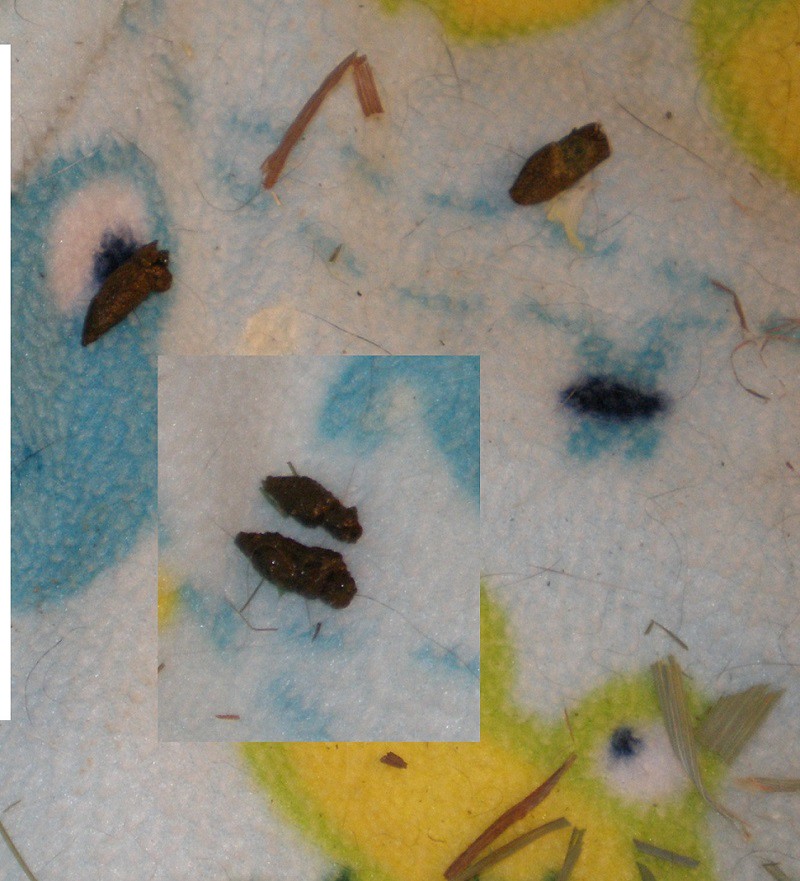 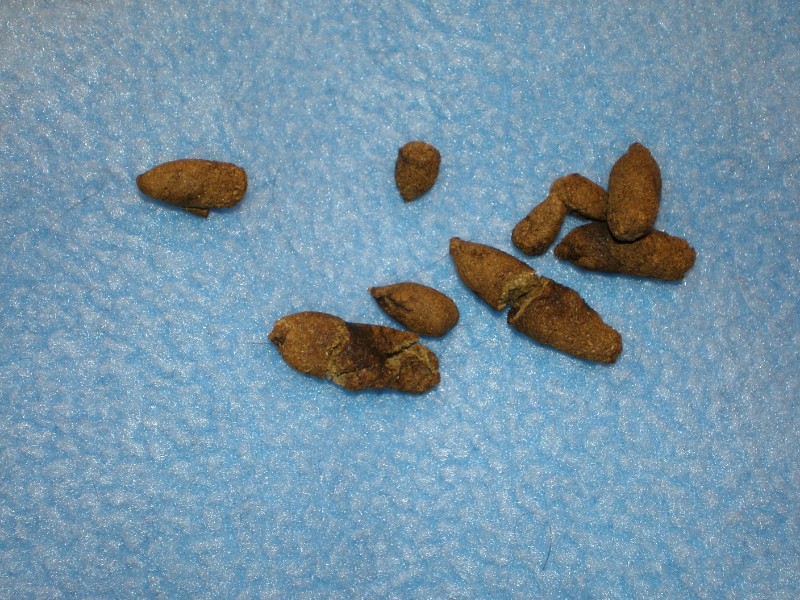 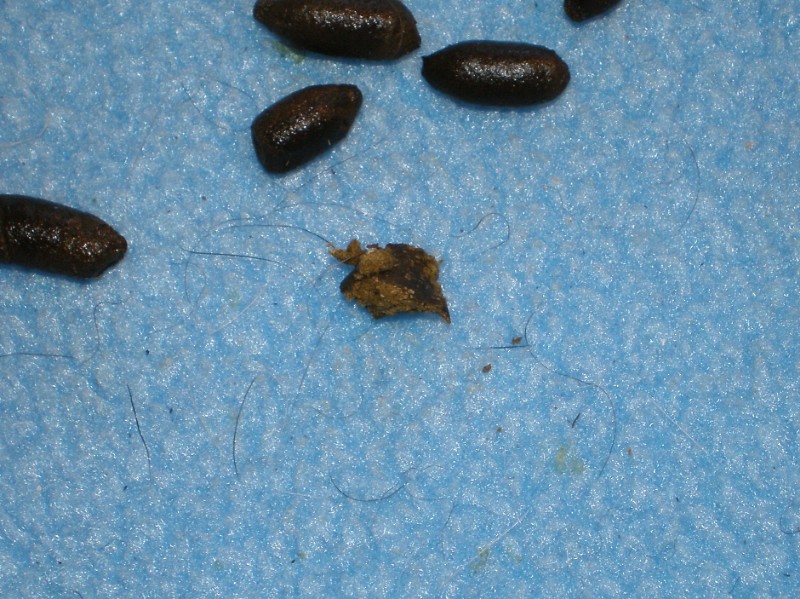 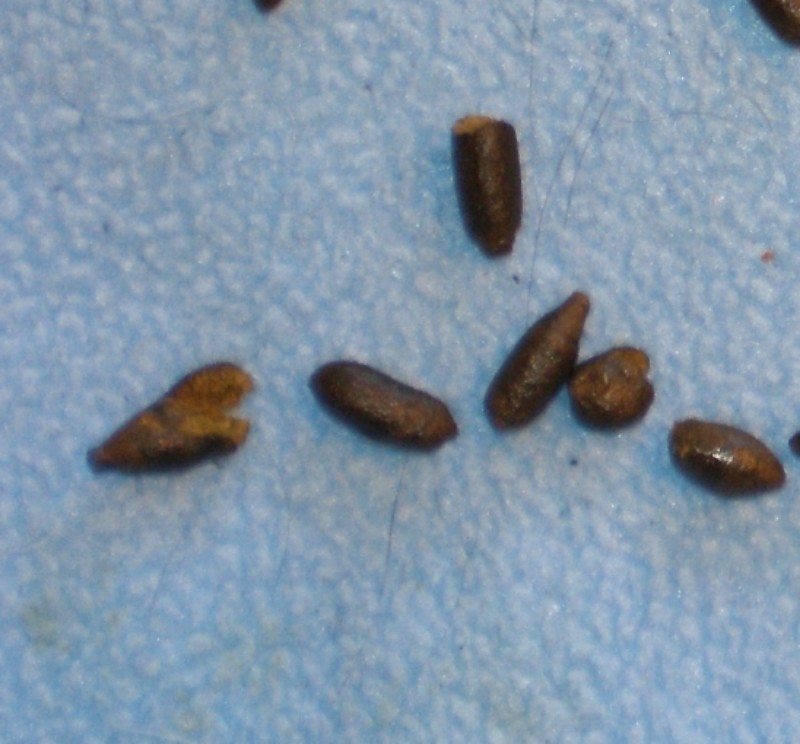 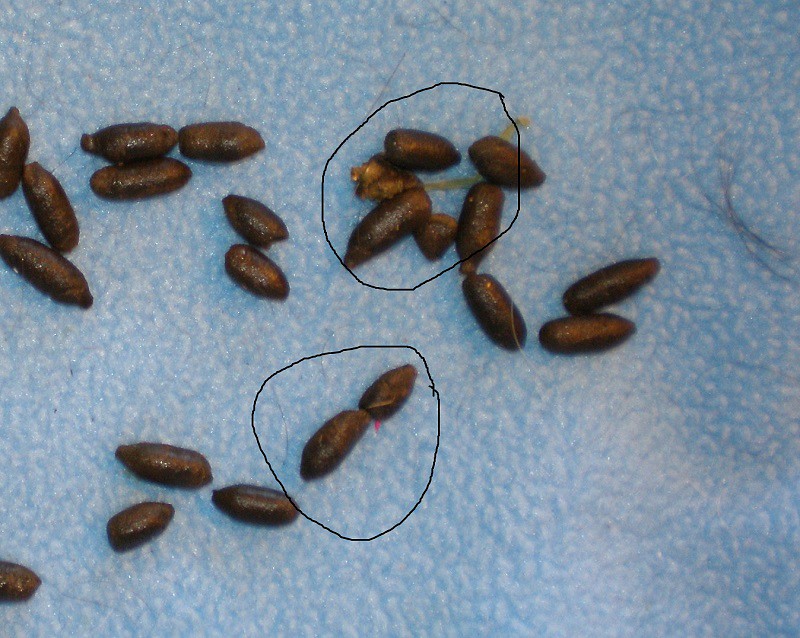 I've resized the pics to 800 pixels X whatever-pops-up. How many pixels should I make them for the best size?
Top

Have you tried cutting back on her veggies and seeing if her poop firms up?
Top

I've cut her back to only lettuce and a few pieces of bell pepper (less than the 1/8th I keep seeing in threads) It's leaf lettuce. I was giving her a little parsley which she used to love. Last time, she turned her nose up to every bit of it. She does get some carrot occasionally, also. This morning I decided to see if she really is having trouble eating. The carrot disappeared in no time, so I guess that question is answered. She also devours the lettuce and pepper lickity split. I cut out the pepper for a while to see if there was any change in her poos, but didn't notice any, and when she refused the parsley, I added it back in. It's been about 3 days now since she did that. Should I switch the pepper out for something else? Suggestions... She absolutely loves KMS pellets, BTW. She hates having to eat away from the others, though. Usually she's at the front of the cage with VeBee, climbing the grids. This morning I had to chase her down. :o(
Top

I'd cut ALL the vegetables out for 24 hours, then add them back one at time, 48 hours between each new addition. That's the only way you're going to be able to figure out if veggies are the problem.
Top

Ahhh. Thanks! I didn't know that. Dang, I already feel guilty that the others get all the good stuff. :o} So, 24 hours clean, 48 hours between new veggies. Got it.
Top

And reintroduce one at a time. That way you will be able to see if there is one particular culprit, with the rest being okay for her.
Top

Thanks, Talishan. I really appreciate the help!

Reading back over this thread, I realized I hadn't posted Fuzz's "personal" info!

To date (knock on wood) more-or-less healthy, except for the ear mites noted prior.

Treated for lice and/or mites several times since she was old/big enough and in just-in-case situations. Since she's a fuzz ball on legs (Abyssinian?) and her hair is short and curly, it's hard to tell if she has ever had any. Most timid guinea pig I've ever met, and since I've known a total of 5 over a little over 2 years time span, I have the experience to know one, hahaha.

Seeing her droppings on a full computer -- I don't think I'd be too concerned. We've had a number of pigs for whom what you've pictured has been normal. After worrying about it for a while we just gave up.

I've come to the conclusion that within a certain range, their droppings don't have to be perfect.
Top

Thanks, Talishan. I'll relax a little bit. :o) I have to admit, the vet didn't seem to be worried either. I'm just so scared I'm going to do something wrong with these little guys and they will be the ones to pay the price. Dogs and cats I know tons more about. Anything else is a definite novelty to me. Except bears. ;o)

The really smelly ones that show up now and then... Are they something I should be concerned about?
Top

Probably not. Are they a lighter green than the others?