Welcome to the world, little Merry! 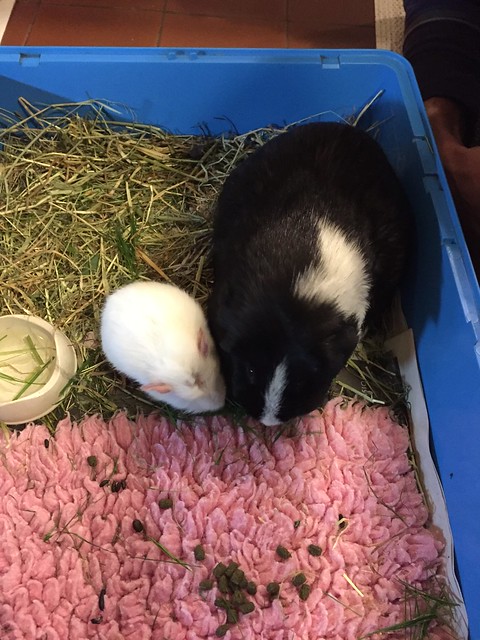 And here is the story of how she found us!

I called at a pet shop around three weeks ago (I always look in any pet shop I pass, to check they are looking after their animals reasonably well) only to find a pen full of 2 week old baby guinea pigs in a cage with their mum. They had them on view so customers could reserve which one they wanted. I was shocked to bits, you see one was just like a baby Fairy. I asked the shop owners if they understood that the white piggy was blind and deaf and would probably have other issues too. They didn't, they just thought it was 'the runt of the litter' and they wouldn't sell it but let it live 'out the back' with the retired mums. Ugh! I felt so emotional I couldn't bring myself to speak to them about her further and left the shop.

I discussed it with Ian during that week and Ian said he would go have a look.

He stopped off at the pet shop twice, and again on Friday morning. The babies were still there. They agreed that Ian could have the piggy as they couldn't sell it anyway. They had recently been removed from their mum and he could take it there and then. 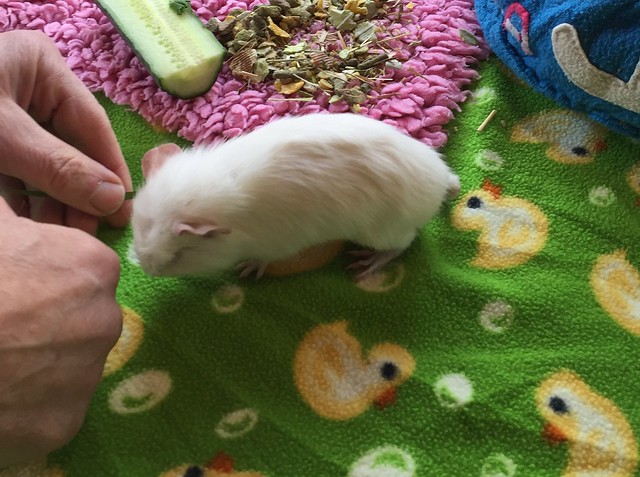 She was teeny-tiny, and weighed just 127g on Friday at noon, the weight of a newborn is almost as much. She must have only just got enough to sustain her and nothing left to help her grow. She would have starved to death no doubt within days of being removed from her mum. She was in such a poor state we couldn't bring ourselves to name her.

We set her up in a cage in the kitchen with a heat pad under, (4pm to 8am), and installed Auntie Pansy in with her for comfort and company - she is the perfect surrogate mum! Very err, cuddly and gentle. During the day she has her own little area sectioned off in The Piggery, again with heat pads underneath and Auntie Pansy as a companion. 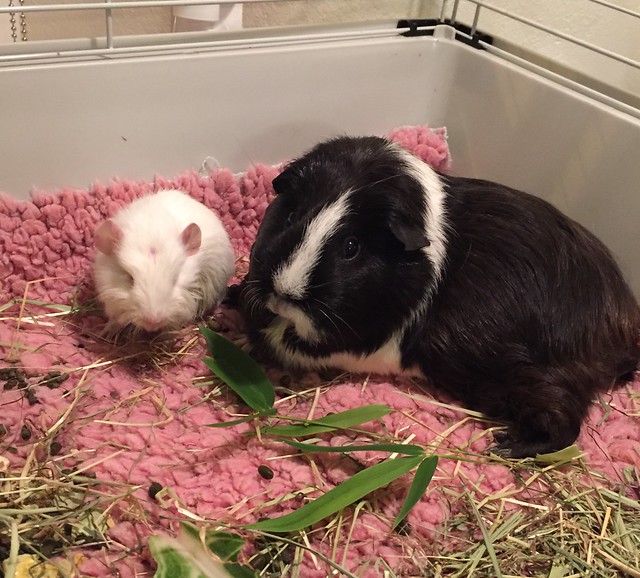 I am syringe feeding her every hour or so. And twice during the night. She is gobbling the food down (after a shaky start, she didn't seem to know how to swallow it and we didn't get her to eat much at all on Friday)! I will weigh her every day too. So far she has gained a huge 40g. She was 166g today! She's just had a good feed, carrot mush, goat milk porridge and the critical care food for guinea pigs. 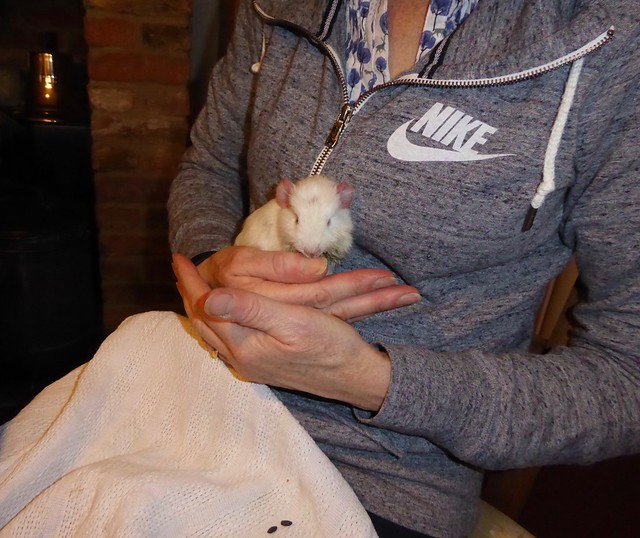 There is no saying she will have a long life. I truly hope she does, but I know these little piggies sometimes have unseen issues. At least she won't die from starvation in a cold pet shop. She has company and warmth, and already takes much pleasure from being fed and fussed!

There will never, ever be another Fairy - in fact already it is obvious Merry has her own special little character and is different in many ways. But, just like Fairy, this special little piggy deserves a good life, filled with all good piggy-things! We will do our best to give them to her.

She is loved! She appears a lot livelier, and there is a little round plumpness to her tummy! She is noisy! Happy! Joyful! And Merry, very Merry!
Top

Mildred and Ian, you are such good people and I adore you to the moon and back. <3
Top

Oh my goodness. You two have the biggest hearts! Little Merry is so lucky. I'm so sorry that the pet store is breeding pigs, particularly since they've got a lethal so there are some bad genetics going around. Telling them so probably falls on deaf ears.

But hooray for Merry. May she live a long, happy life with you.
Top

Congratulations to all 3 of you! She is a cutie and I'm very excited to know that she's found a forever home with people who will go to the ends of the earth to care for her. Thank you for saving her from a horrible death at a very early age.
Top

Oh soo many good wishes and love little very merry Merry. You two are awesome, Mildredm. Good luck from MrTex and I.
Top

I can imagine Fairy stomping her foot in frustration waiting for you and Ian to go and get that baby.

Destiny! It is no mistake she has landed in your lap. That is the best thing I've heard all week.

Has she wheeked? How very Merry. Congratulations to all of you, including of course, Auntie Pansey.
Top

So much love and so many best wishes and so much YAY for this post!

Also, somebody needs to go back to the pet store with some basic genetics tables and talk to the owners about recessive genes. You can't adopt one out of every 4 of their pigs, if they keep breeding the same parents!

Love, love, love for little Merry. Welcome to your fan club, little one! Whether you're around years or less, they'll be fabulous moments and we will all cheer for you!
Top

Little Merry has found a wonderful home! I'm so glad you were able to get her!
Top

You and Ian are wonderful. That is one lucky little piggy to have ended up with you. I've gotten pretty lazy about checking guinealynx regularly. You guys are one reason I make the effort. Bless you and Ian, and your little piggies too!

Much love and happiness to Miss Merry!
Top

Way to go, Ian and Anita! This piggy was meant for you, and you for her!
Top

Merry was very lucky that you've been keeping an eye on things!
Top

I hope Merry thrives! She couldn't be in more caring hands that you and Ian!
Top

Little Merry is so precious. She is gong to have the greatest care she can ever ask for with both you and Ian; I am sure Fairy approved!!
Top