My Niko who is 2 1/2 yr old sow has had blood in her urine for 3 weeks now. Took her to the vet as soon as I saw blood and she had her x-rayed for stones but nothing showed up. Vet gave us Baytril for 2x a day for 3 weeks but Niko still has bloody urine. It's not a lot but some spots daily. I'm concerned this could be uterine rather than bladder related. Anyone else had this problem in a piggy?
Top

It could be from the reproductive system, but Bactrim is usually more effective for a bladder infection than Baytril.
Top

Ditto bpatters. I recommend having a culture and sensitivity test done on her urine to rule out infection. Constant blood in the urine can also be caused by sludge. Is her urine gritty or have a lot of white calcium deposits in it?
Top

My Lucie had frank red blood in her urine which was caused by a tumor in the trigon of her bladder shown on ultrasound. She suffered severe hemorrhagic cystitis and went for several ultrasound guided cystocentesis as she also suffered from a multi-drug resistant UTI and needed frequent subq fluids for the remainder of her life.

Bella had blood her her urine, more pinkish in color due to sludge build up as evidence by X-ray, Ultrasound, and Elevated specific gravity levels. She also had an ultrasound guided cysto which found the sludge in the bladder. We would see clots of sludge after she would pee and witness her squeal when peeing every now and then.

We treated the initial possibility of a UTI from irritation and scraping of sludge with bactrim and solved the long term issue with using a BRITA water filter and switching from oxbow to KMS pellets. Its been months, never seen sludge since!
Top

After 21 days of antibiotics, Niko was still "spotting" so tonight I called the vet to inquire on getting an appointment tomorrow. The vet told me to take Niko to the emergency clinic and the on call exotics vet would meet me there. It was confirmed that there is a mass approximately 2 x 1 cm in the caudal abdomen. He suspects it could be a uterine growth as it is adjacent to the bladder. Following up with vet in the next week - they gave me Meloxicam for her inflammation.
Top

Hoping for the best for him!
Top

I forgot to mention that Niko has developed two bald patches on each side of her right in front of her legs that are dry and rough - she had these before that cleared up with some aloe. I am putting coconut oil on them and we will see if her fur grows back this time :( I know that this is a symptom of hormonal issues...
Top

Ovarian cysts usually don't cause the hairless patches to be dry and rough; they're usually just hairless, but completely smooth.

That said, symptoms of hormone imbalances vary widely and greatly. Combined with the bleeding I would definitely want an ultrasound for her, and the sooner the better.
Top

Calling the vet in the morning to find out when I can get her in. Problem is, when I took her to the Emergency clinic, I cashed out her vet fund and only have a little left :( I don't want to wait but I may have to
Top

How about a picture?
Top

Is there any bad odor to her bum and nether regions?
Top

Just got word from the vet that they did a sonogram and found that there is a calcified mass on her uterine horn and the uterine horn is inflamed - the vet wants to spay. going to pick up Niko now
Top

Oh, poor girl. Hopefully with her surgery she will get on the road to recovery from her current ailment. At least there is more light on her situation now.
Top

A spay is major surgery. Here's all I know about postop care:

Best to her and please keep us posted.
Top

I hope she recovers well!
Top

I'm trying to post a picture of Niko's bald patch which is getting bigger, pooches out and is warm to touch (it is shiny due to aloe oil and color is a bit yellowed for some reason): 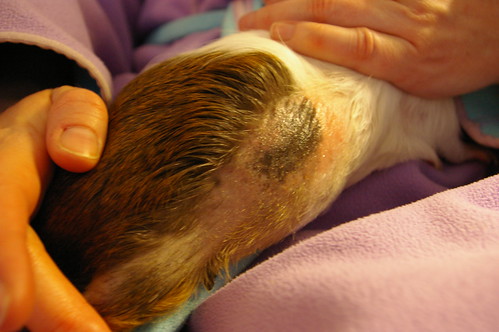 The swelling and the warmth to the touch indicates infection. I'd take him to a vet as soon as I could get him in.
Top