Well I can tell you all a lot has changed since I left a couple of years ago. Firstly I had a nervous break down in 2015, it resulted in finding out I was suffering from ptsd. Since then its been a rollercoaster of craziness, but now that things are level, I wanted to share my masters to you. My herd has changed a lot since I left so I decided that I must start a whole new thread.

So to start off with I currently am a slave to 10 piggies. 6 sows and 4 boars.

Alba, our oldest sow, her age is unknown but she's been with me almost 4 years now I believe.

Molly, She is doing much better now that she isn't a baby maker. We believe she's 3 this year.

Pumpkin, Molly's youngest daughter. She's two now and a total abby (you know what I mean....)

Pickle, is also an older sow but it is unknown how old. She came to us with Potato. She's a naughty girl but so pretty (and she knows it).

Oreo, Oreo is an older male. He has never had a good time bonding according to his owner. He's currently being housed with Moehawk (just recently but so far so good).

Mr. Dinkles, he's about 1-2 yrs old and came with his brother Todd and Oreo from another home.

Finally we have Todd, brother to Mr. Dinkles and bonded boss man.

Good to see you! It sounds like you are in a better place now.

I have to say, your guinea pigs are painfully adorable! I just want to hug each and every one!
Top

I'm with Lynx on that! Make sure you take good care of yourself.

They are all precious beyond words. (So much for taking a creative writing class!)
Top

Just gorgeous piggies!!!!!!!!!!!!!!!!!!!! Can I have your address so I can come and piggy nap? Might doggy nap too! Alba so much looks like our Jasmine we lost earlier this year. Just the face, I thought I was looking at a ghost! So many piggy lips and tootsies, I think I'm going to swoon!

So glad you're feeling better now, I always find my piggies a great comfort and a calming affect. Now give me your address so I can start swimming. Here piggy pigs I have a carrot for you! Look forward to more stories of the piggy bunch!
Top

I suffer from ptsd due to a sexual assault as a teenager. My piggies have been the best therapists in the world. I do have a human therapist as back up! I am so glad you are doing well and have an adorable herd to help you over the bumpy road of life.
Top

Hi eschimpf! I'm glad you are back. The new herd is gorgeous
Top

Thank you for the welcome and comment. I've been away due to moving, for the first time in 9.5 years we moved! We went from a town house with a communal yard. Not the best for our dog nor the piggies. Sadly we lost 4 piggies shortly after the move. Pickle, Molly, Princess Peach and Moe all passed away. Pickle and Moe did not handle the move at all. We rushed them to the vet but she couldn't find anything wrong and sadly even hand feeding failed. Peach and Pickle were very close, she passed away 3 days after her. When Molly started to stop eating and go down hill we left her at the vets, sadly she didn't make it the night.

Early August saw some much needed good news, a new boar for Moe. His name is Vanilla Bean or Mr. Bean for short. He's still recovering from a little fungal issues. 3 days after we rescued him I was asked by an acquaintance to take in her 2 skinny pig boars.

You can imagine the roller coaster I've been on the last two months but thankfully things have normalized a bit and school starts next week here so I'll have my days back to myself LOL.

Today we went out for a little treat, its been the perfect weather to take the Skinny pig boys out. We found a perfectly shady spot with lots of yums. 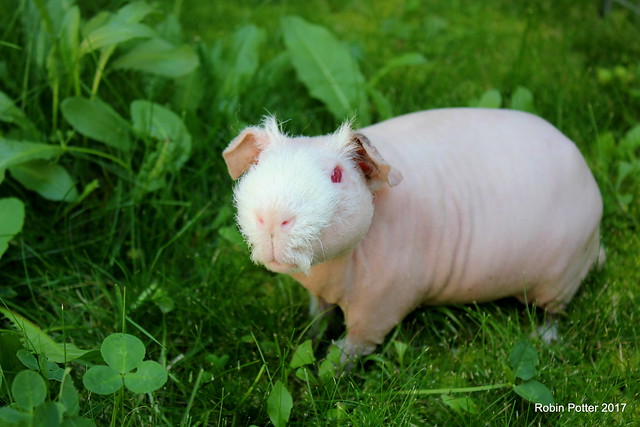 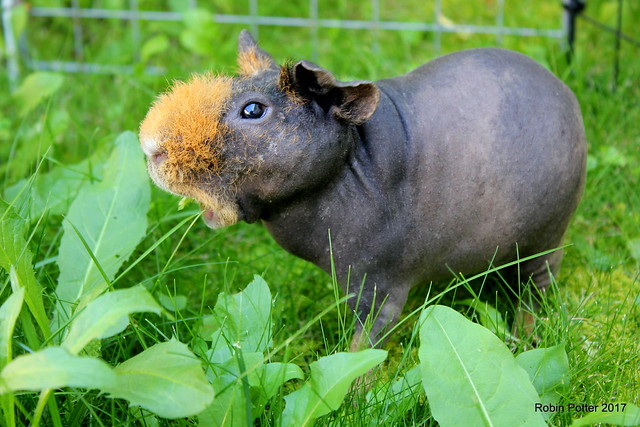 OMG its the grass, kill it with your mouth Todd! -Mr. Dinkles 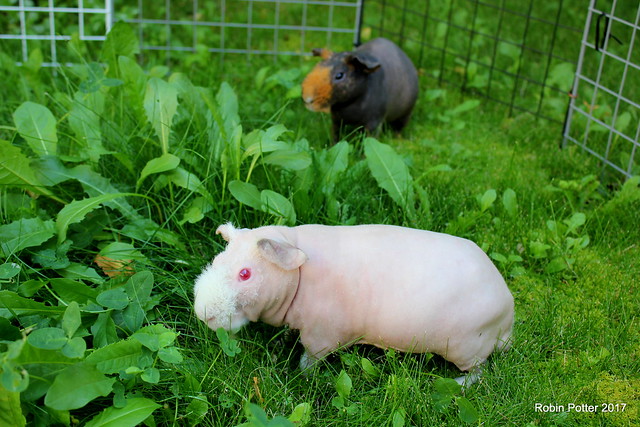 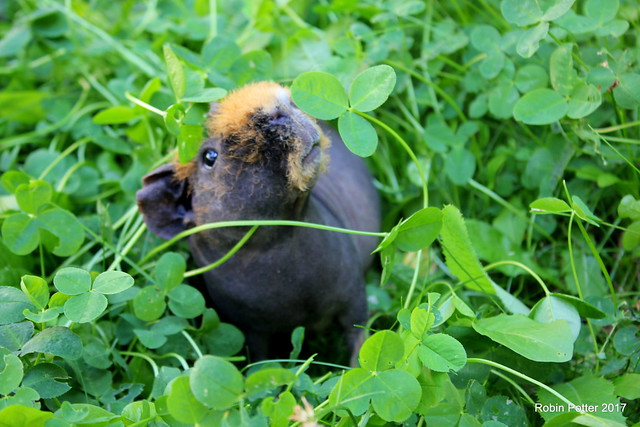 I love the smell of clover in the middle of the day. -Mr. Dinkles

Our newest addition to the skinny pig craziness. Cheech (darker) and Chong (lighter). 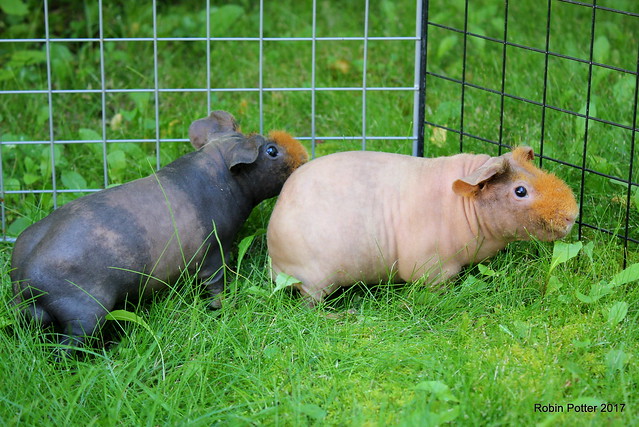 The two of them to my knowledge have never seen the outdoors (other than to get to 3 homes in 6 months oi). 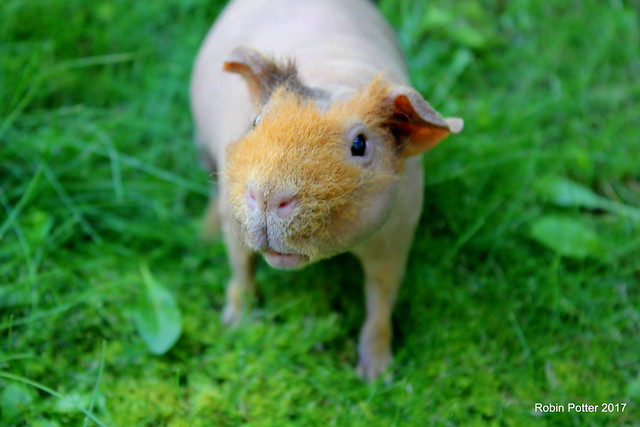 I kinda like this outside idea as long as your near hooman. - Chong 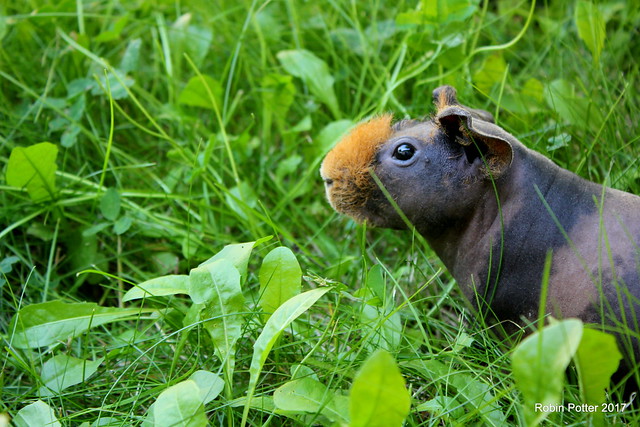 I don't know... let me ponder this outsideness. - Cheech 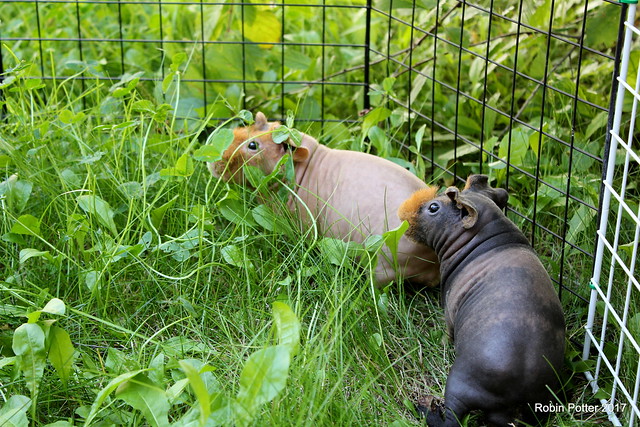 How about a rest Cheech? - Chong
You know thats a great idea. -Cheech
Top

They are so handsome! I remember how fabulous your pictures always were! No less fab now!!
Top

I am so sorry for all your losses. RIP wee ones, you were truly loved and will be sadly missed. Run free and popcorn in paradise and eat the fresh green grass. Reunited never to be parted. Sending big hugs,they will always be with you!
Top

Lynx: Awe thank you. I have had a lot of practice over the years and am so grateful to be able to show them off to you. Its sad that there isn't a calendar to enter anymore but I understand why.

Daisymay: Thank you luv. Its been a hard summer that's for sure.

With the cooler weather coming more and more each day I decided to take the girls out for a little forage time. 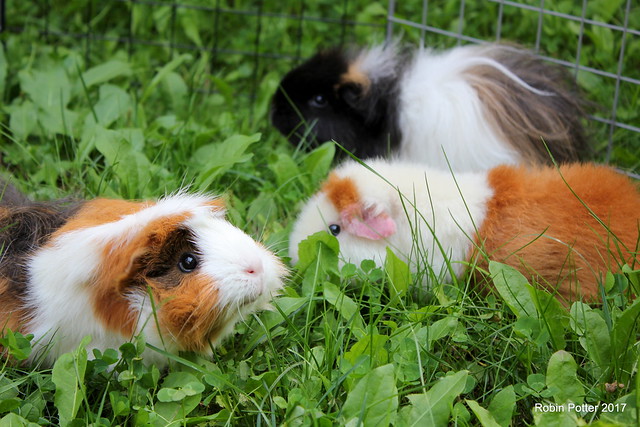 (bottom to top)
Pumpkin, Potato and our old lady Alba. 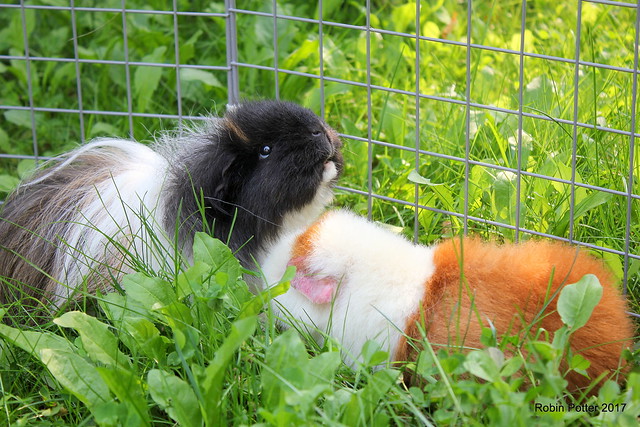 "Don't worry Potato I'll protect you from anything!" - Alba 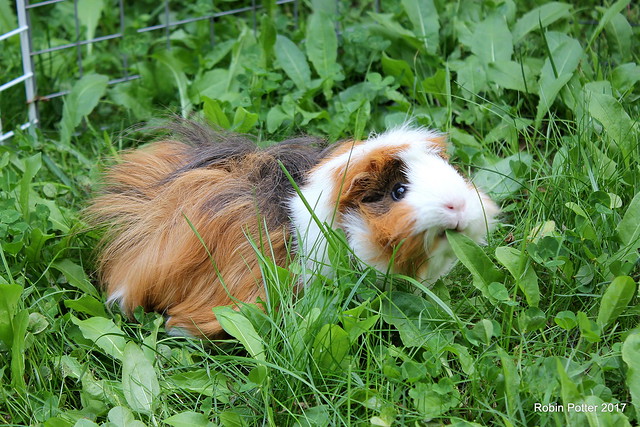 "Huh? here is danger and not just food?" - Pumpkin 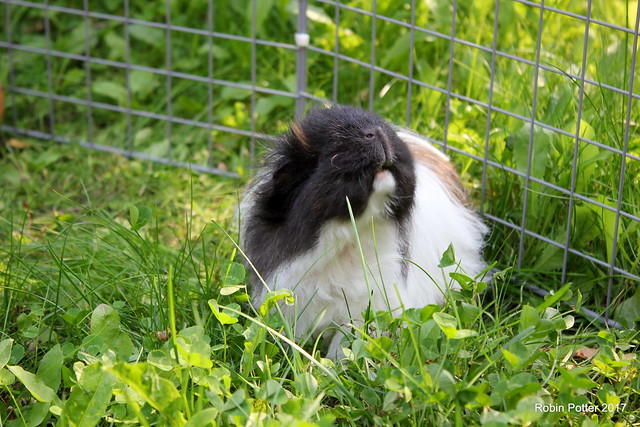 "Well none that I can see but don't worry I'll keep look out." - Alba 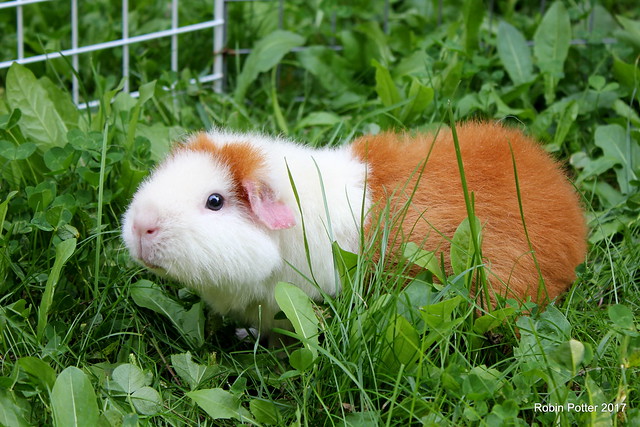 "I feel safer already with you on watch" - Potato
Top

You take such beautiful photos of your herd eschimpf!
Top

Awe thank you. I've been really practicing and trying out different styles.

Everyone has been settling in nicely these days. One days seems to blend into another. Today I whipped out the old seeing machine and made the boys some new Halloween stuff. More is to come but for now they have some new things. I took a quick video (no sound) on my cell. They also just had a nice bath and coconut oil rub down so they aren't too happy with me.

I bet they love those fringes! The first two peaks at your pairs of guinea pigs - it was almost like they were posed toys!
Top

Lynx: They sure do. I love making them too. Its so much fun for all of us.

Life has been really crazy here. I'm awaiting surgery as I have a gallstone impacted into the opening of the gallbladder and its making me really sick, but not sick enough to not get some CUTE holiday photos. I can only post a few so feel free to check them all out HERE 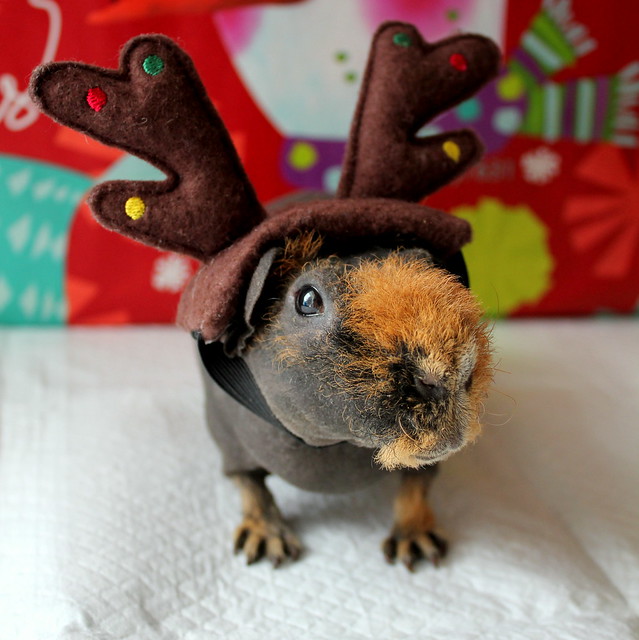 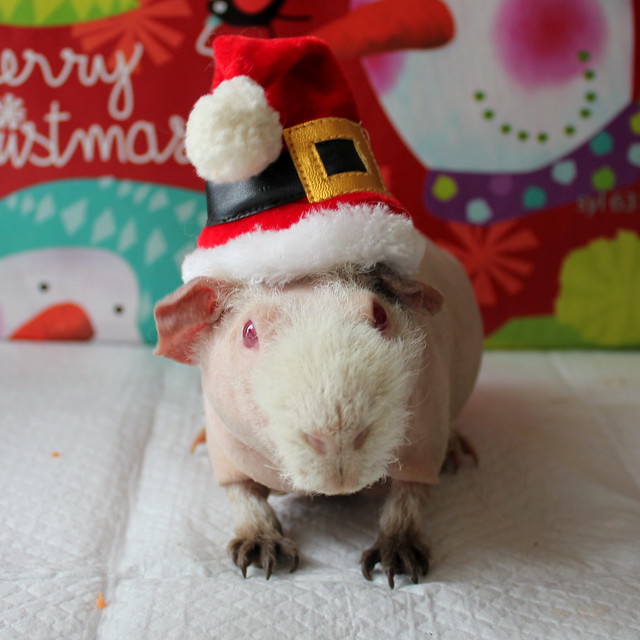 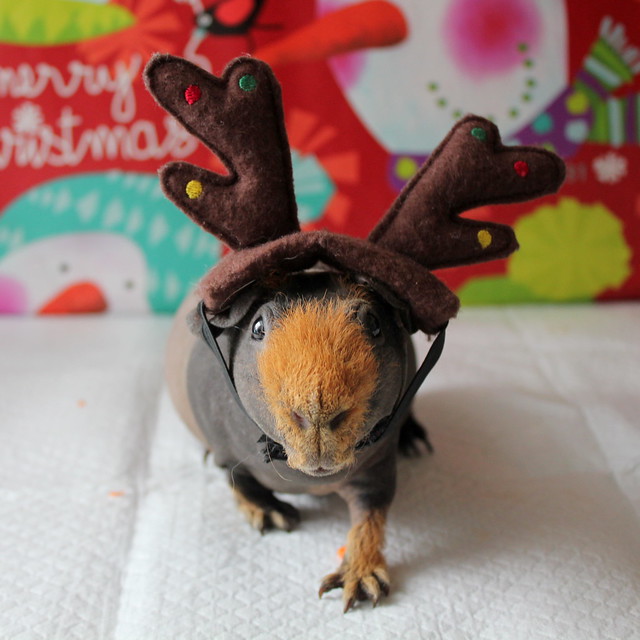 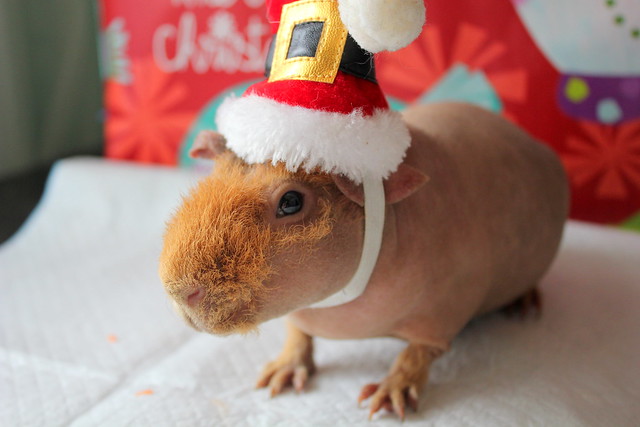 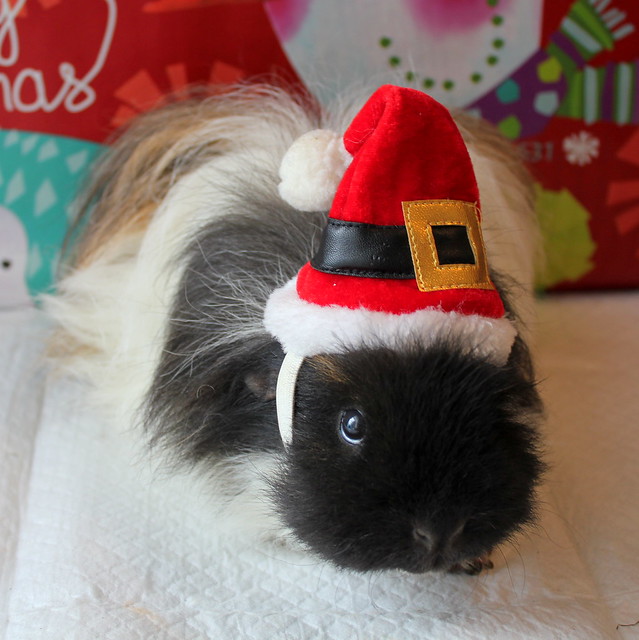 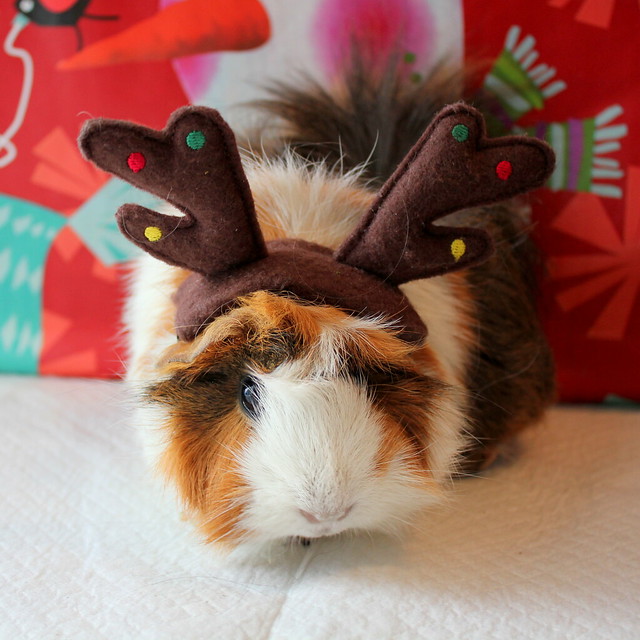 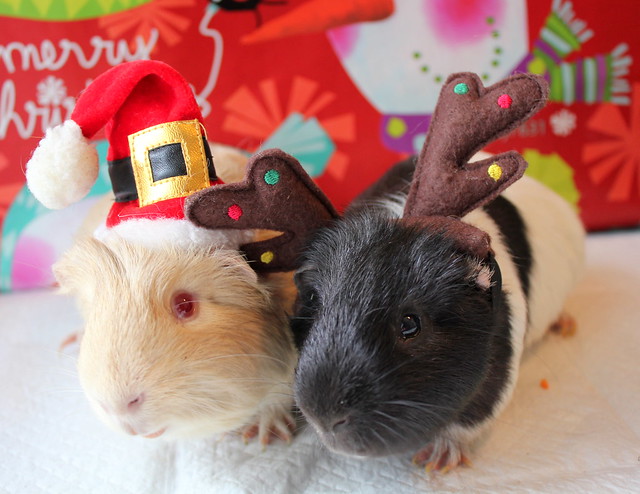 Oh, they are adorable!!! You really knock those pics out of the park!

I am really sorry about your gallbladder. I had mine yanked out some years back (posted here about it). I remember spending a whole night awake and in pain/discomfort.
Top

Love the pics! Hope the surgery goes well! Looks like Alba is giving you the stink eye. Amazing they stayed still long enough to have pics taken. Happy Christmas to you and your Christmas cute piggies!
Top

Thank you both. I had a few piggies who needed extra bribes to live up to their full piggie model potential and even more for their forgiveness.

I saw the surgeon and our time frame is sometime between Jan and April. I'll get two week notice before I go in. So far the pain is manageable and the boyfriend is off work for the season so he's been helping me keep to a rigorous eat scheduled of micro meals.

But in other piggie news, the boyfriend and I are going to be making new cages soon so that all the piggie are in one location. This is kinda to prepare him for my surgery as he will be the main caretaker, thankfully he's as much of a piggie lover as I am, so I know they are in good hands. I'm going to be building wooden stacked cages like similar to what I had in 2013. I know now all the things I hated about it (like being three cages high, this time only 2 per), the way the front was and so on.

Then once that's done and the rabbits blow their winter coats its new cages for them as well, their the boyfriend's babies as I'm highly allergic to them when I touch them but I am happy to help him build a manor for them to live in. After all, its not their fault they are evil bundles of allergens to me.
Top
Post Reply 17 posts • Page 1 of 1