Elvis is my neutered male from the Hollister rescue nearly three years ago. (Known at the time as the Lion King.)

Beginning about last October, I noticed a very slight, gradual trend of losing weight. Since it was so gradual and nothing else seemed amiss, I didn't worry too much about it. By April, though, the difference started being half ounces instead of eight or quarter ounces, so I became even more watchful.

About a week ago, he really started acting lethargic and seemed to be hopping more than walking. Everything else about his behavior was fine. Eating well, interacting with the other pigs, drinking well.

My first thought was heart, but since he's a satin, my next thought was Pinta's Shiraz and her loss of bone density.

We headed to the vet today, armed with yet another reference thread from GL. Dr. N. said his heart sounded good. His teeth also looked great. When I mentioned the bone density issue, he felt his back legs for a long time, then felt my companion pig's legs and said Elvis' legs didn't feel right. The knees were a strange shape and he felt ridges along his leg bones.

X-rays revealed serious pitting of his bones and severe arthritis in his knees.

The plan is daily calcium lactose, supplement with 50 mg Vit. C daily and o.15 mls metacam suspension twice a day for a week, then daily as needed. Hopefully, we can at least stop any more loss of bone and make him more comfortable.

We discussed the idea of satins being more prone to this problem. He said he'd seen it in other breeds, but they either were rescues in pretty bad shape overall or there were problems with diet.

Since I know Elvis gets a balanced Ca:Ph diet, plenty of dietary Vit. C and sufficient calcium (I don't limit calcium in their diet, even with another pig with sludge), my vet was pretty interested in the notion of it being heriditary and/or breed specific.

Since we know Elvis was a major breeder for the Hollister pigs, he was also interested in finding out if any of the pigs we suspect were fathered by Elvis had the same issues.

If you have a Hollister pig that is a satin or looks like Elvis could be the father, he'd love to know if there are x-rays for comparison or any similar problems. I'll post his picture as soon as I finish this post.
Top

He has a pretty distinctive look. (Handsome, too, but I'm a bit prejudiced.) 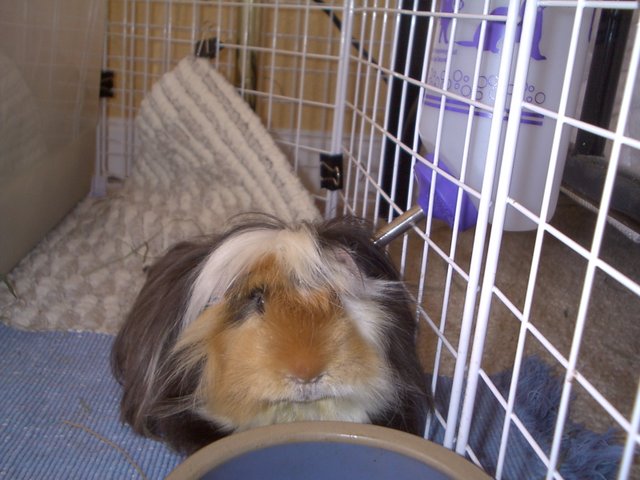 ...and just 'cuz it's all about him, here's a pic in the Santa hat Teresa gave him. 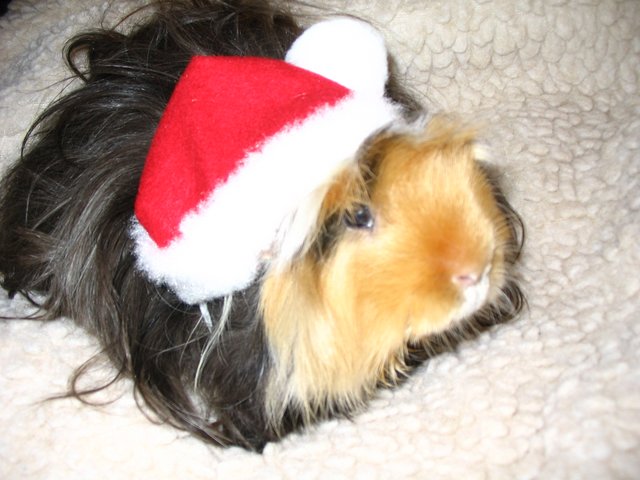 Elvis is wicked good-looking. It will be interesting if any of his pups display similar problems (satin or not).
Top

I had a satin sow with terrible bones. We didn't pursue treatment at the time as she had worse issues (teeth). It is interesting if this pans out.
Top

Wow, Becky, love that pig! Snowflakey hit it on the head with the wicked good looks. What a stud.

Guinea pigs aren't exposed to sun much and I am guessing the vitamin D they get (which is essential for bone building) comes primarily from pelleted food that includes it as an additive. I know it would have to be dosed carefully as excess D can also cause problems.

Do you plan on giving extra vitamin D too? I'm sure you also remember the info on supplementary C causing arthritis problems in guinea pigs. Would natural sources be better and no supplementation (I'll bet he was getting enough -- the studies looked specifically at guinea pigs and the effect of C on developing arthritis)?
Top

Oh, I forgot to add...he thought Pinta's vet's idea of 10 minutes a day in the sun was a good one. I set up a portable pen in the back yard and took everyone out there for a while today. They loved it.

You know, I had forgotten about the Vit C link and arthiritis. I'll give him a call about that. And yes, I'm sure he gets plenty of C daily. I actually picked up some alfalfa today. I thought I'd let him have a bit of that every day. Any thoughts about that?

Josephine, that's really interesting about your sow. Yes, it will be interesting to see if there's a connection. Actually, LeeBee has what we think is his daughter, so Dr. N. said to have her in and he'll do x-rays, so maybe that will tell us something.

My Derek is a 2 1/2 yr old red satin. I was aware of the bone density problems associated with the breed and was wondering if it may be beneficial to have x-rays at this stage in his life to see if there are any early issues?

Dr N is his vet too.

I got Derek from SF Animal Care and Control at four months of age.
Top

It would probably be good as a screening measure. You know, like dogs over 7 years of age should have chest rads every year to scan for cancer mets.
Top

I fell in love with the Lion King when I saw him at the Penninsula Animal Shelter. I even cuddled him for awhile. :)

Sending hugs and well wishes to the big guy. My Hollister baby didn't quite make it to 3 years old. :( I don't think he was related to Elvis; he had short smooth hair.
Top

Thanks Josephine. I had heard about bone density tests but sounds like x-rays are were I should start.


Becky, Elvis is one gorgeous hunk of a boy!
Top

Karen, a member here, is trying to organise a study of Osteodystrophy in satins with Desiree Riemersma-Soentjens, a rescue in the Netherlands. They are trying to interest a University to conduct a UK study. Information is here:

Piggster, I think he mostly was interested in offspring of Elvis, but after reading the stuff Deborah posted, I'd most definately get a base-line x-ray done.

Ottosmom, he was quite a scrapper back then, as evidenced by the large missing chunk of ear. He's nothing but sweet, now.

Deborah, I've copied the Netherlands article and will pass it along to my vet. Wow. That's pretty impressive antecdotal evidence, I think.

I wanted to add that it was interesting that they think teddies should be included in the studies. That would mean teddies, texels and skinnies, since they all share the same types of genes, I believe.

Also, Elvis has perked up a bit. Poor baby must have been/is in a fair amount of pain.
Top

Frizzle (a teddy) has lost a lot of bone density especially in the ribs. She's a sludgy pig (calcium carbonate) so I don't know if it's comparable to the Satin gene.
Top

Osteodystrophy is a metabolic disease. Calcium absorption of the body into the bones is not sufficient leading to decalcification of the bones. Fibrous tissue is then formed which leads to instability. Therefore Calcium supplements are not only useless but probably dangerous due to the fact that it could lead to the formation of crystals/bladder stones.

I don't quite understand this statement. Perhaps someone can interpret it for me? I don't see how the first three statements neccessarily lead to the fourth.

When Amidala and Artoo were diagnosed with calcium problems I started supplementation. Both passed away peacefully in their sleep months later. I regret I did not get necropsies done now that all this stuff about satins is coming to light. Was it not only a waste of time to supplement with calcium, but was it harmful? Neither had any problems with stones or sludge.
Top

If you had no problems with stones or sludge, it could hardly have been harmful.

Maybe it's something like osteoporosis in humans where increased calcium intake may not be adequate and things like fosomax are required to make the calcium actually "stick". I vaguely remember someone saying something about giving fosomax or something similar to a guinea pig but I might be wrong.
Top

Therefore Calcium supplements are not only useless but probably dangerous due to the fact that it could lead to the formation of crystals/bladder stones.

For God's sake I have frigging xrays posted showing how calcium supplementation filled in bones. I also observed Shiraz having much improved movement.

Did these people do a bone culture to come up with the diagnosis of Osteodystrophy? We believed Shiraz to have osteopetrosis(all indications were pointing to this) until a bone culture done after she died revealed Paget's Disease. ( She died from a URI due to her immune system being compromised by the Paget's Disease". Her bones were great after calciuym supplementation.) Definitive diagnosis requires cultures and labwork. You cannot diagnose from an xray. An xray can only show you there is a problem.

The jaw can also be affected causing problems eating for the guinea. In hindsight, this was the first indication of Paget's Disease for Shiraz.

· A study in Berlin in 1999 showed 100% of Satin guinea pigs having OD.
Where's the study? How many pigs were involved? How was the OD diagnosed.

I have a real problem with assuming diagnosis based on xrays alone and then saying the problem is incurable and nothing will help. Helllooo? I have xrays saying different.

What we do know is that satins are prone to bone density loss. We also know that in the case of Shiraz, not only was the density loss arrested, it was reversed thru supplementation.

Until everyone starts doing necropsies and getting cultures done our knowledge will stagnate. I suspect Paget's Disease is a relatively rare issue with Satins but shows up when they are young. I also suspect that regardless of the Paget's, Shiraz would still have had a bone density loss and that it could have been managed if that was her only problem.

I would be concerned about supplementing C to these pigs because of the recent research showing extra C can contribute to bone spurs. There may be something happening with the C that contributes to calcium being redistributed. This could be monitored via xrays but if both calcium and C are being supplemented there will be no way of knowing if the C is affecting things.

But the bottom line is I have frigging xrays posted showing the difference calcium supplementation makes to bone density.
Top

Reading back on that thread, it doesn't look like we supplemented Shiraz with C - just calcium.
Top
Post Reply 210 posts