A Wink and a Wheek

That last picture is adorable! :)
Top

They are so adorable! I love Mo.
Top

Mo got a haircut last night. I've been giving him haircuts for awhile now, but last night was the first time I "documented" it. 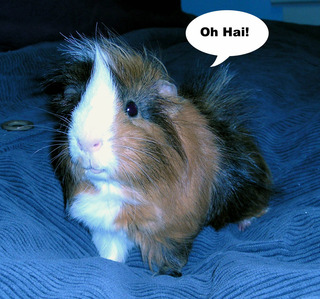 "Are you ready to get a bath and get your hair 'did?" 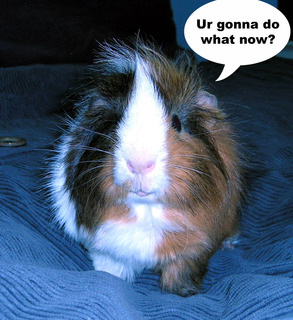 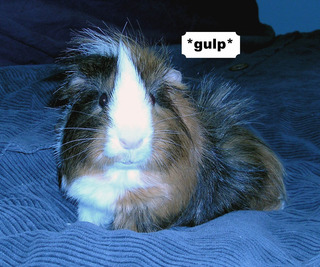 Meanwhile, Mortar convenes with papa on the state of the economy and which mutual funds he'd recommend. Luckily he's not charging for his consultation...yet. 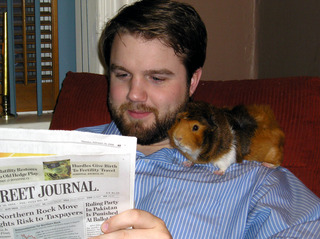 After a quick dip in the sink and a thorough drying by dad, Mo shows us the result of a sitting with mom and her thinning shears: 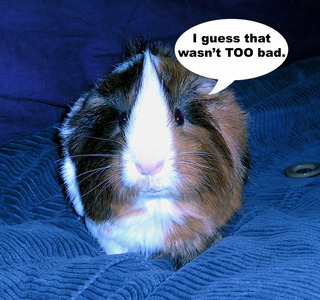 "No, hun. Nothing too major. Just cleaning you up a bit." 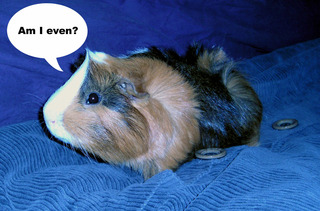 "I think so! I can still see your butt-hawk. I know how you like your butt hawk." 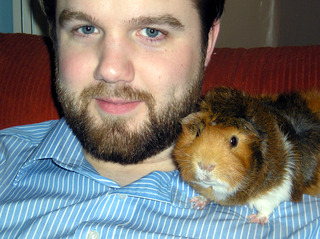 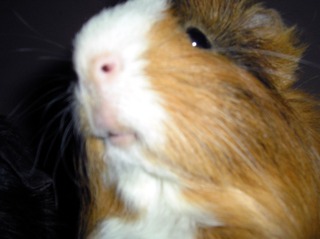 Brick got a bath last night as well, as he was in dire need of it. What a stinky, stinky boar butt that boy has. Geeze.
Top

Look at little Motar, he was really paying attention to the WSJ, perhaps he can starts his own financial consulting firm. :)
Such a handsome and SMART little fella.
Top

Really great pictures! I especially like the first one, Mo's hair cracks me up. His hair cut turned out wonderful.
Top

They are so beautiful. Too bad I cannot commit to more than 2 piggies. I'm still searching the best piggies that stick to my heart. I bet any piggy will... :p
Top

I really like reading about your gang! I love all of the pictures and your cage is amazing.

I also like the comment about Mo's spa day! You did a great job on Mo's haircut. My boys go to grandma's house and have their spa day. (my fiance and I are no good at haircuts!) 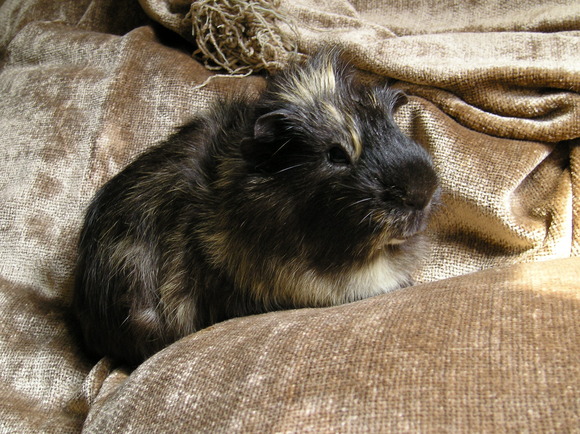 Bonjour, ev-wee-bod-EE. Je suis un cobaye. Or shall I say, I am Jacques, a distinguished and French a-guinEA a-pig. What I am doing here, I do not yet know. But here I am, no? So we will see what happen.

Here I am striking my superior Frenchman snooty pose: 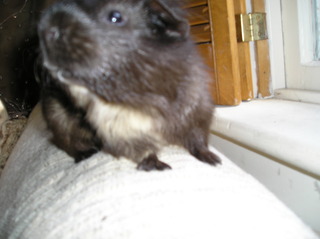 And here you can view me from zee top: 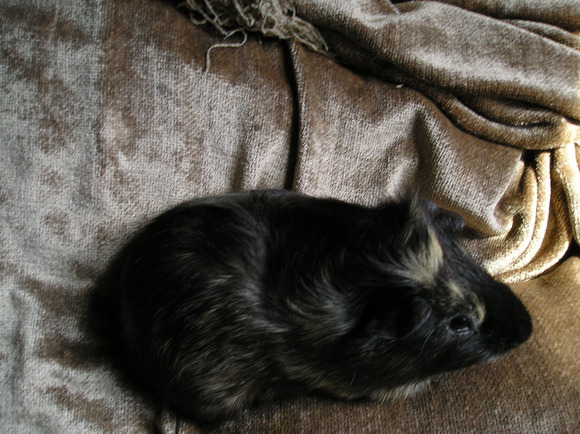 I am very handsome piggie, non? 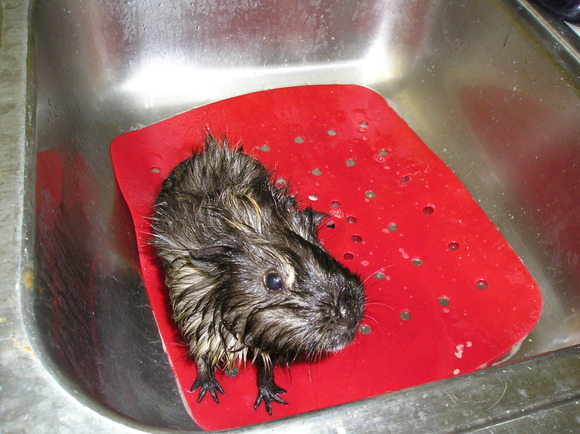 I dried off, but still I am disgruntled by the treatment 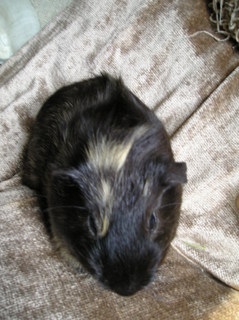 OK, I am done speaking for now. I will let l'homme, the hooman male, speak now. Ciao.


Hello. Dan here. Amanda's at work this afternoon, grooming dogs, so it's left to me to update the chronicles.

First, a sad farewell wink to Brick, who died a week ago today. We miss him very deeply, and are still so sad at his unexpected parting.

We had him cremated, and we were able to pick up his ashes this morning, from the humane league. That leads us to the happy "wheek!" While we were there, we looked in the small animals room. They had three male guinea pigs--all living separately and in good health--and we got to spend some time hanging out with each of them in a "visitation room." The last was the gentleman you see above, Jacques. Amanda fell in love, and so did I. He has a gentle personality, and seemed so comfortable with us and interested in us. The rest is history! He is now home with us, living in temporary quarantine for a couple weeks. While maman set up his C&C cage, papa cleaned his butt and ears, trimmed his nails a bit, and then gave him a nice little bath.

Our hope is that he will get along well with Mo and Bear. We'll see how that goes, in a few weeks.

Welcome to the herd, Jacques! We're so happy to have you with us, here in your forever home. I'm sure maman will have more to tell everyone about you soon!
Top

Thanks for the update, Dan, and welcome home, Jacques! What a cutie. I hope he settles in well and gets used to this spa treatment.
Top

Adopting Jacques is a beautiful way to remember and honor Brick.
Top

Jacques is beautiful, and the grooming pictures are so cute.
Top

I think it is wonderful for you to open your hearts and home to little Jaques in honor of Brick. :)

After quarantine we attempted an introduction between Jacques, Bear and Mo. We loaded up the floor area with hay and veggies, armed ourselves with oven mitts and set the boys loose. 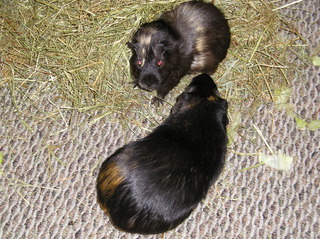 It was probably the best introduction we've had with Bear, Mo and any of the other boys we've tried. We had them out for at least an hour, and I completely cleaned and washed everything in the cage. The three boys seemed to hit it off great together.

And then it began. 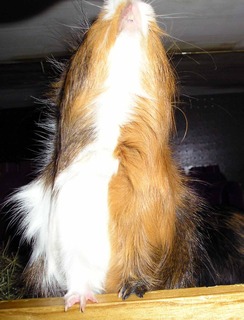 Acanoffleas scurries over to the cage to see what the effing heck that crazy noise was.

We both open the barn doors and peer inside and everyone is...fine. The boys are inspected, and though there are minor signs of spats, we decide to leave them be to figure it out. That's what your supposed to do, right? RIGHT?

So leave them be we did. The boys ate together perfectly. 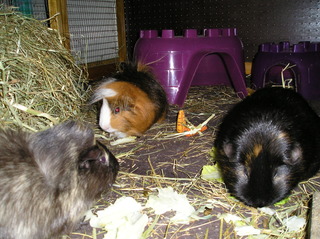 Mo and Jacques chased each other playfully. At first, anyway. Then chasing soon became harassment. War wounds started appearing - Mo had a bite wound by his ear that threatened to absess, Jacques had some sore looking scratches on his rump, Mo had quite a few nips around his mouth...so it was decided, after a week of being together, that Mo couldn't tolerate sharing his precious Bear (...they have 16 square feet between the two of them. You'd THINK there'd be enough space for one more but noooooo...) So now, here is our current set up:

Mason and Mortar up top, sharing a wall (separated)
Bear and Mo downstairs 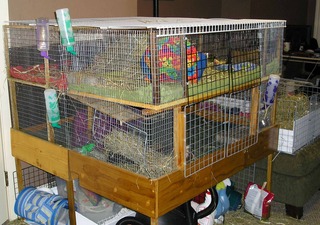 Jacques on the ottoman next to everyone.

I'm guessing this is how we're going to have to leave it until we can build another cage to accommodate. Everybody seems happy, including Jacques. He's not being harassed and nipped at any more, and he can still see, smell, and talk to his brothers. And Mo has his precious Bearman all to himself...

"Momma! Just what are you implying about me and my brudder Mo?!" 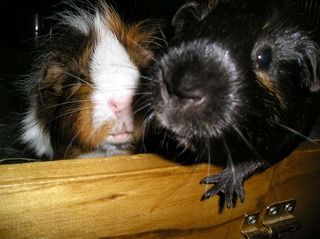 "I...eh...urm...that Jacques nearly found out about your plans to take over the world...?" 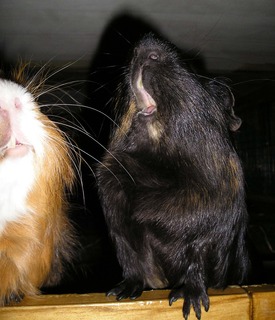 Acanoffleas eyes shift nervously as she backs away from the cage.
Mo scurries away to burrow in the hay, and Bear turns to the pellet bowl. But quickly, he turns back: 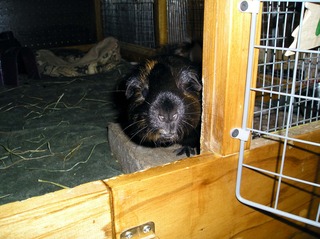 Mortar overheard the whole thing, and he whispered to me:
"Mum, they're full of hot air. Trust me. I hear it all the time. The poots, that is. Bear poots all the time." Meanwhile, Mason communicates with his downstairs brothers mainly by banging the barn doors: And Bear and Mo bang right back: It creates quite the ruckus, which typically spooks Jacques into his pigloo. In fact, his favorite game to play right now is Turtle: All in all, though, we're settling into a rhythm. Five happy piggies (two potentially which are plotting to take over the world), one crazy cat, and a contented momma and poppa.

In other news, it's been awhile since I've painted. Life has been busy, and I haven't really had it in me to get back into my studio to paint. I started a portrait of all five of my boys a few months ago. And then we lost Brick. I finally finished sketching it about a week ago:

It'll probably take me awhile to start painting it. It makes me sad, in a way, but also makes me feel good in another. I suppose it's another way of mourning. Jacques will eventually get his own.
Top

It's a gorgeous sketch. Take your time and fill it with love. It will be beautiful. Sorry your boys couldn't live together. Sometimes little brothers just can't fit into the big boy club.
Top

What a wonderful update. I will look forward to more.
Top
Post Reply 121 posts