Clash of the Titans--or, What have I gotten myself into!?

I'm hoping that the boys will be getting cute new fleece in a week or so. I feel bad making them wait until August for their birthday!
Top

Congrats on the new bun!! She is SO adorable! I am in love <3
Top 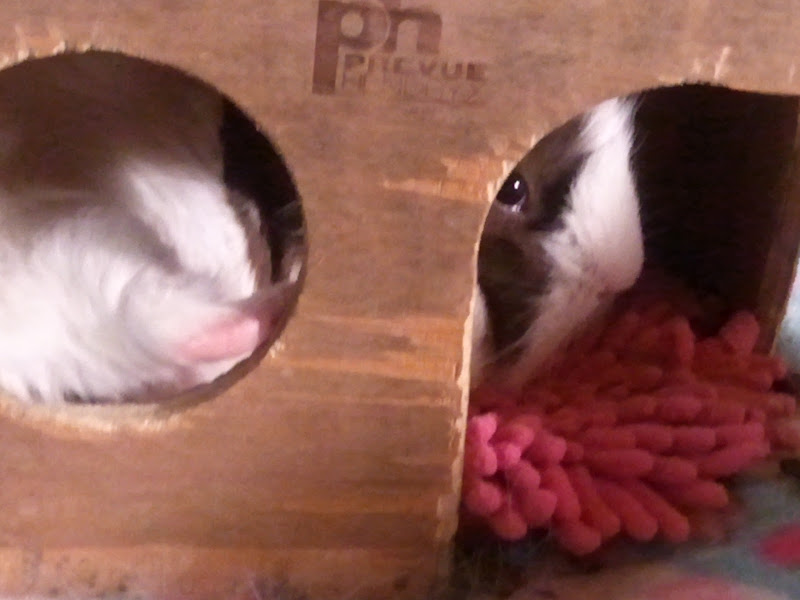 Guess what today is? 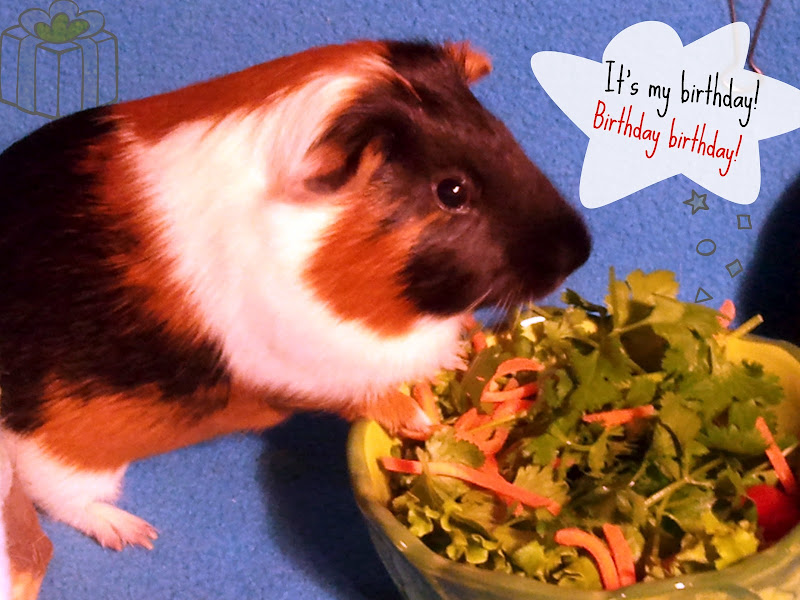 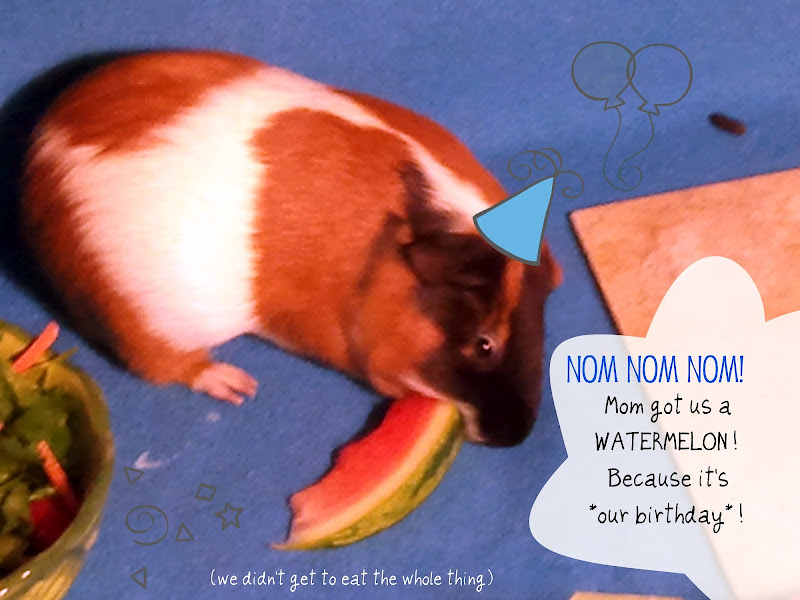 That's right! Apollo and Zeus are now a whole year old! It's been a pretty interesting year between the butt cleanings, hay messes, building cages, veggie chopping, and (of course) the adolescent boarliness that's been happening. I think they've started to calm down now and they're really starting to get comfortable (though they still fear The Hand). Their personalities have really shown in the last couple of weeks and, really, I don't think I could ask for a better, sweeter pair of boypigs.
Top

Happy Birthday, Apollo and Zeus, from me and the girls.
Top

'Pollo and Zuzu say thanks for the birthday wishes!
Top

I think Apollo's back leg/legs might be injured. He is still able to use them, but it looks like he has a slight limp. I checked him over last night and couldn't see any obvious signs of injury anywhere, range of motion seemed okay, and I didn't notice any swelling or inflammation. He responded as he always has to food, his poops were normal (I was lucky enough to see one coming out...), breathing was regular, he's drinking, weight is consistent, etc. His change in stride is so small that I thought I was making it up several times. I went through just about every medical problem in the guide last night and I didn't see any other symptoms.

Then I noticed that Zeus was ruthlessly humping him every couple minutes. It went on for maybe half an hour, then stopped.

Do you think that he might just be sore or tired from Zeus's advances? He seemed utterly relieved when I took him out last night. I think I'm going to call and try to get an appointment at the closest vet, but it might take a couple days to get in. Would this be considered an emergency? Do I need to separate them?

I thought their boarly humping-everything-they-can days should be over by now :/ It's been a couple months since the last outbreak of obnoxious teenage behavior, so this was totally unexpected.
Top

It sounds like the boys might need a little bit of a vacation! I have two girls who are currently in puberty, they can't stand to be apart from each other but still try to lynch each other when they're together.

Also, you're cavy chronicles have made me laugh my head off and totally want to adopt more if these fantastic critters, even though I hardly have the space.

So, a couple weeks ago, I posted about Apollo having some kind of injury or something wrong. A couple hours after that, he was acting normally again and continued to act normally until Monday night, when he started half-hopping with his back legs again. I did the normal inspection--legs, feet, and testes looked okay. Then I decided that it wouldn't hurt to grab those couple pieces of hay stuck to his bottom.

And then I found a pretty large impaction. I thought about taking pictures, but I didn't. There was a smaller amount on Tuesday night, and I couldn't see any last night and he is now passing normal beans.

I'm really confused about what caused it, unless last night and today are just a fluke and he's having muscle tone/strength issues. I'll keep up the daily butt checks, though. We've bonded over it and I think he loves me now.

Zeus's humpage has subsided (for now) and the boys are getting along splendidly. The girls... well, they're divas.

I am guessing it is remotely possible that a really large hard impaction could rest on some nerves and cause numbness. Read over gl/impaction.html for a few extra tips.
Top

Well, Pen and Bailes are wishing Apollo and you good luck! I hope Apollo's okay.
Top

I hope Apollo is fine!
Top

Lynx, the very first thing I did was read over the impaction page! After a couple weeks of daily checks and cleanings, I noticed that things seemed to be improving down there. He has occasional issues now, but not nearly as severe as before. Still checking regularly though, and he hates it.

Otherwise, the whole clan is doing well. I don't have picture proof though. My caseload at work became completely unmanageable and dealing with parents' illness-y stuff... well, I haven't had time for much other than the daily necessities. I completely forgot about the girls' adoption day. I didn't do Pigmas picture this year. I'm a horrible mom! However, I resigned from my position(!) and will be finding something that will allow me to spend a lot more time with my babies. I've missed them. I can't wait to get back to a more normal routine and be able to relax again. But this isn't a Crystal chronicle!

(If you're curious, though, I'm leaving the social work field to become... a mechanic! I'll be starting school this fall at the latest.)
Top

It was new fleece time. The boys haven't gotten new fleece since moving into their bigger cage, so it was definitely their turn. Hancock Fabrics had a bunch of prints and solids on sale for 60% off. 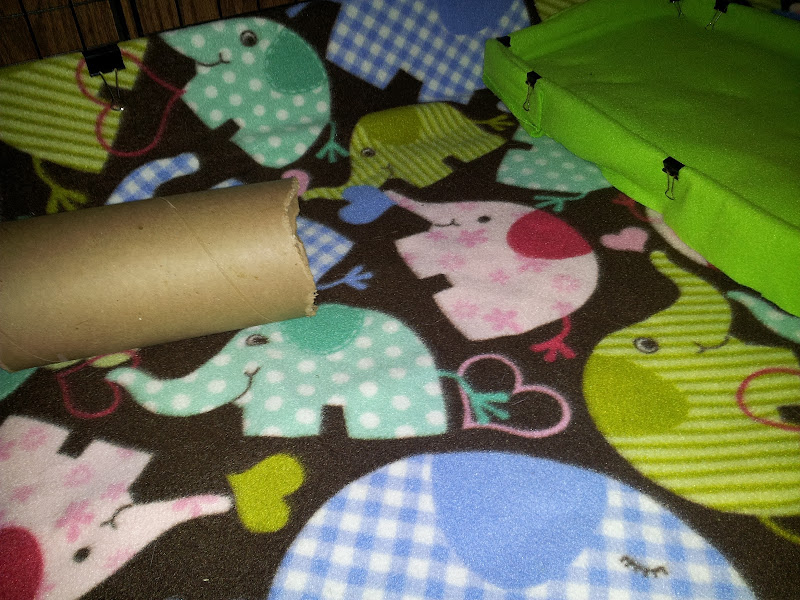 Elephants can be masculine, right? The bright green is also new.

We also had manicures last night. Coco was NOT amused. She is still giving me stink eyes. I'm a little bit scared. 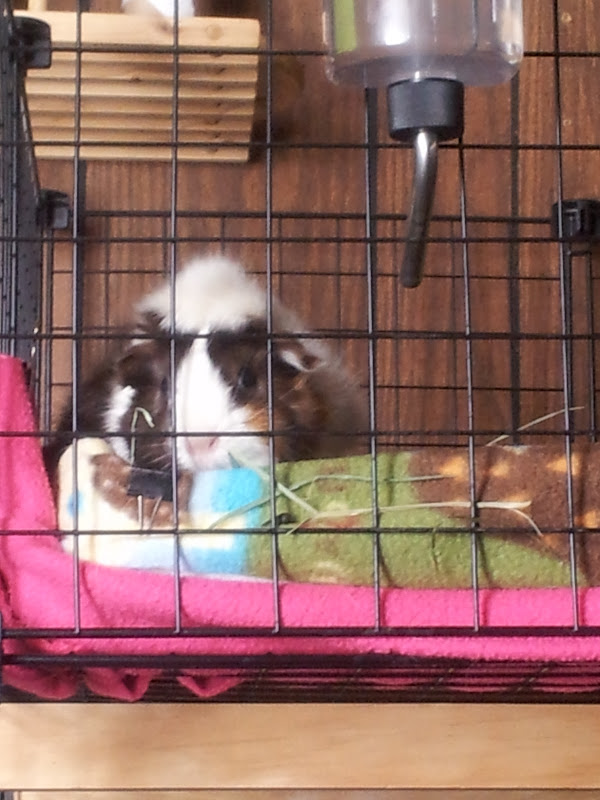 (Thanks, shaky cell phone, for these horrible pictures!)
Top

Elephants. Very manly.
I would be scared too, if Coco made that face at me!
Top

I'm glad she's not bigger. I think if she could eat me, she really would.
Top