Their coloring is almost exactly the same. Kahlua has a little more white fur on his neck.
Top

I've now earned enough trust from Buttercup and all 4 of the babies for them to take food from my hand. Muffin is so skiddish that I thought I'd never get her to trust me, but she does. She's still very skiddish but getting better. The slightest noise and she runs for the shelter of the tunnel. Only difference is now she comes right back out, whereas before it took several minutes for her to get up the courage.

Ruffles has always been a real outgoing pig. She's apprehensive about being picked up, not much else. She and Muffin both like to sit on top of the pipe, but Ruffles usually wins that argument. She an Abby for sure. She's got the Abby character and personality. The other 3 little ones are content to sit when I hold them, but she likes to climb around on me and explore.

The boys, Kahlua and Jack are also doing well. They wheek louder than any guinea pig I've ever had. They too like the top of their house. Unlike the baby girls, they are content to take turns or share it. Kahlua is particularly crafty when it comes to veggies. I always give them a piece of lettuce by hand before I dump the bowl in the cage, so he gets extra pieces by taking the one I give him and putting it under the hut. Then he comes back for another. Nobody can convince me that guinea pigs aren't smart.
Top

It's nice to hear how they are doing! I do have to say, I always valued trust highly. For some little animals it is such a gift and is the thing I remember the most.
Top

Because of you and this forum, I've learned to value the trust of all my pets. I always strive to earn it, even before joining here because nothing makes me feel bad as much as having them afraid of me. I just didn't appreciate it the way I do now, so thank you for that.
Top

I will be posting about Muffin and Ruffles along with Buttercup on this thread rather than making a new one for the baby girls. What a trio they are. I don't think Buttercup was much older than a year when I got her. I'm only guessing based in her size and her activities. Having two little ones in with her seems to be working out. They run around together, which is something that the older guinea pigs don't do nearly as much as Buttercup and her 5 month old companions. Being their mother has made her the matriarch of the cage. She plays with them a lot, but she keeps them in line too.

Muffin is still the smallest, but don't let her small size fool you. She holds her own when it comes to the food, water and the coveted spot on top of the tunnel. Shes a fast little thing too. Its hard to hold her because she runs without any warning. She'll run right up my chest and over the back of the chair before I can catch her, so I make sure she has a blanket to get under and that keeps her from doing that so far. She's skiddish as can be, but she comes up to the front of the cage to take food from me. She runs to the tunnel after she takes it, if I put a finger through the cage for her to sniff or if I open the door. I know from experience that she and the other girls will get over that eventually.

Ruffles is the bravest of the 3. She hangs out in the open and doesn't run unless I open the cage door. She sits still when I hold her and is the easiest one to pick up. She's the only one of the 4 babies who purrs when I pet her. Quite the little Abby character, that one. She is also the only one of the three who doesn't run to the tunnel to eat the food or treats she takes from my hand. She gobbles it down and begs for more. She would probably be ok without a place to hide, although I don't deprive any of my guinea pigs of that. Maybe some of her bravery will rub off on her mom and sister.
Top

I've had to reread the whole thread & compare notes with our babies. Our runt is still the smallest but the most assertive.

The mama piggie and the 4 babies haven't tried tomatoes before, so I let them each have one of the grape tomatoes i got from Town and Country Market's scrap produce. Buttercup and Muffin wanted nothing to do with them. Ruffles ate about half of one and the two boys, Kahlua and Jack like the them and ate theirs.
Top

Do you cut them in half?

I often give my chickens grapes as a treat (not recommended to give guinea pigs grapes) and cut them in quarters or half depending on the size so I don't have to worry about eating round things. I imagine the grape tomatoes are larger and this might not be a problem. Easier to eat if they are easier to grab though!
Top

They grabbed it and poked a hole in it. I guess the girls didn't like the juice because they had nothing more to do with them. The boys ate theirs and Ruffles, who is the Abby girl only half of hers.
Top

So we had another tornado scare last night. No warning, no nothing. Just a message across the phone saying to take shelter now. We were fortunate it didn't hit us directly, but other parts of the Ozarks weren't so lucky. We scrambled to get everyone downstairs to the basement and made it just as the high winds, rain, thunder and lightning hit us. Not bad considering we didn't have time to stage the carriers and totes to carry everyone down in, since no tornado watch was issued in advance. We had quite a bit of wind damage to our trees and it was strong enough to blow through the open window and toss a few things around our living room, but nothing major as a tornado didn't touch down by us. It was just a lot of wind.

I figured on having at least a couple of months to get the emergency cages built. Boy was I wrong. We had to keep all but 3 of the piggies in totes throughout the sheltering time. Mr Bubbles had one of the large carriers and Kahlua and Jack each had one of the small ones. Most of the piggies were ok, but poor Buttercup and her two girls were terrified. You could see her eyes dilated as she had that terrified look on her face. Her two daughters were huddled up underneath her the whole time, which was about 30 minutes. It took an hour and carrot treats to get them to relax again.

I learned my lesson. Their emergency cages will be done by the end of this week.
Last edited by Renonvsparky on Sat Dec 11, 2021 11:21 pm, edited 2 times in total.
Top

Does sound scary! I hope you are never in the path of a tornado!
Top

I was wondering about you Friday night & how you were handling getting the pigs situated. We had so much weather going on here that I really wasn't paying attention to your part of the state & if you were in the thick of it. Glad you got them all down to safety, if not the way you had planned.

A couple of months after we moved to St. Louis from Kansas City, in Jan. 1967, we had an F4 hit about a half mile down the street from us. No warning what so ever. The storm was bad and the lights went out & my dad looked out the front door and in a flash of light saw the tornado to the west. He said "Hit the basement". About 10 years ago we had an F3 tornado a bit south of where I live on New Year's Eve. We have a warm up or 2 most winters & when the cold front comes through there's the potential for severe weather.

I knew we were in for trouble when I looked at:
https://www.spc.noaa.gov/products/outlook/day1otlk.html

Of course it doesn't look the way it looked on Fri. The area that had the really bad supercell that went through AR, MO, TN, and KY was red. I've hardly ever seen that.

I was watching the weather & asked my daughter if she had plans for getting the pigs into the basement, so she thought about it. When the sirens went off we carried most of the pigs in carriers & had Neely & one of her babies separate. Nothing came close, so we put the pigs back & then the sirens went again.

There wasn't any severe weather where we are, but there was plenty in the metro area, into IL. There were several different storms involved producing tornadoes.

I know this is long. I'm a tornado geek.
Top

Look at Buttercup and her girls. They've gotten pretty comfortable in our home. I get this greeting now instead of having to coax them out. It won't be long before they let me pick them up without having to chase them around the cage. From left to right, it's Muffin, Buttercup and Ruffles. 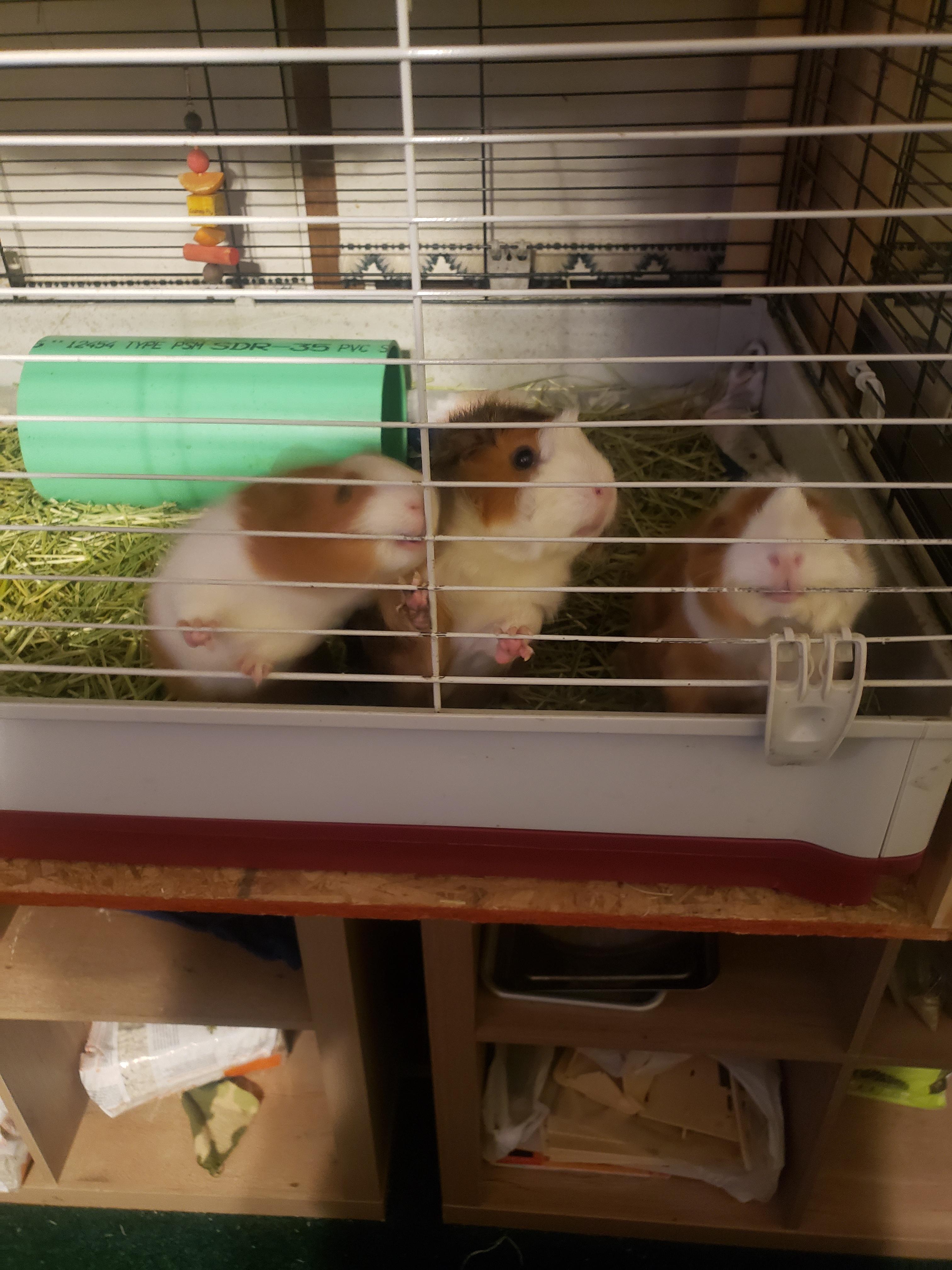 Daughters look like they are smiling. So cute all 3 of them!
Top

Yeah. They've picked up the dreaded wire chewing habit passed down from Scruffy. The only one of the 11 pigs I have now who doesn't do it is Buttercup.
Top

What a cute little family!
Top

Got an email from the vet in Reno that had been seeing Buttercup. Apparently, this is her approximate birthday. She is 2 years old now. Happy birthday sweet girl!
Top

Happy birthday Buttercup. Hope you enjoy it with your girls and get loads of treats! You are a darling girl and lucky to have found your forever home! Get spoiled sweetie!
Top