Wishing a very happy first birthday to Kahlua and Jack! Out of my 10 guinea pigs, they, along with their sister, Muffin are the only ones who I know exactly what day they were born. They're doing very well. They're quite friendly and more outgoing now. They come up to greet us and give us finger nibbles. Picking them up is easy now too. There's a corner of their cage where they go and wait. They stay pretty calm when we hold them too, which is a far cry from when they were pups. I already gave them some extra lettuce and they're going to be getting some grass later when it cools off.

This is a picture I took of them when I was changing their bedding. 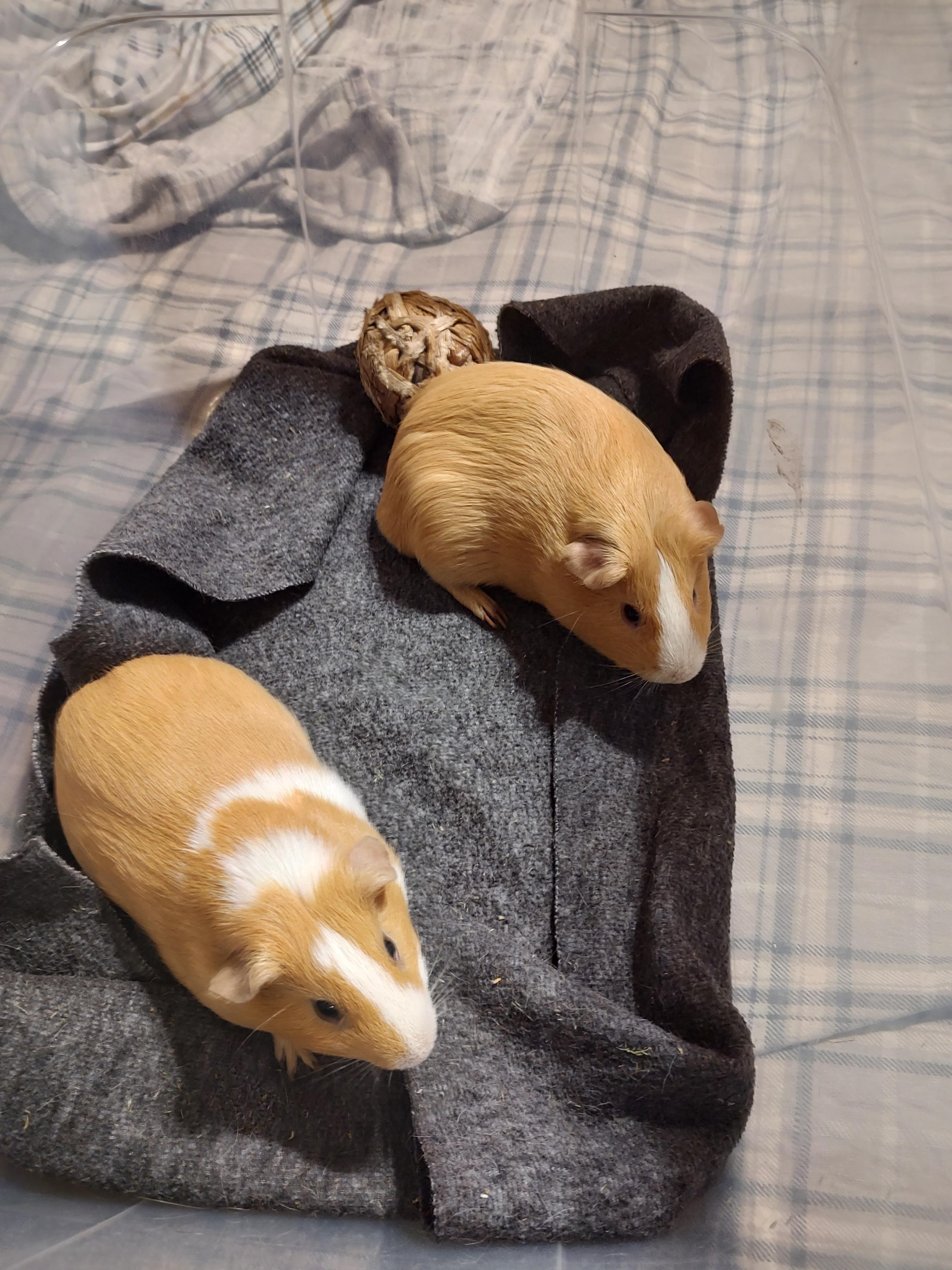 What wonderful colors! I love butterscotch and white guinea pigs!

Happy first birthday! What big boys you have grown up to be!
Top

Happy birthday boys! I hope you had a good day!
Top

Got a call from the animal hospital in Ava, MO asking me if I'd be willing to bring some of my guinea pigs in for their one day youth veterinary camps in August and September. It's to introduce high school students to the world of veterinary medicine. I'm happy to do that (anything to help young people) and I've chosen Kahlua and Jack to bring in August. Mr Bubbles and Dean are pretty laid back, but they're getting old and aren't likely to tolerate that much handling by people they don't know. Buttercup would be pretty good with it, but her daughter and cage mate, Muffin is just too high strung, so they're out. Gillian and Skipper don't tolerate too much handling, even from us and tend to get nippy when they are done being handled and ready to be left alone. Wilber and Grady would do well too, so they're going in September.

In exchange for bringing them in, all four will receive a free check up and nail trims. I'd say that's a fair trade. I will be there with them the entire time to make sure they are handled safely and correctly. They asked me because I'm the only one around here who has guinea pigs and willing to bring them in. I'm excited to do this and thought I'd share it with you guys.
Last edited by Renonvsparky on Sat Jul 30, 2022 11:26 pm, edited 1 time in total.
Top

That sounds cool! You may have tips for handling them. I generally point people to this page to make sure they are secure and can't bite you:
https://www.guinealynx.info/handling.html
Top

Ha! That's exactly where I went for tips on handling them and I will be passing that info on at the junior vet camp.
Top

That sounds like a great experience for the students, and nice perks for the piggies!
Top

Kahlua and Jack were stars at the Ava vet camp. The kids were really good with them. I gave a briefing about them to start off. I went over housing, care, feeding, social structure, health and breeding (I stressed the dangers with it) and then took questions from the kids. The vet was there too, but he said he was going to leave the briefing up to me. " You probably know more about them than I do", he said.

After I finished answering questions, the kids got to hold Kahlua and Jack. They started out a little bit jumpy, but calmed down fairly quickly. The kids all had stethoscopes and got to listen to their heart, lungs and digestive tract. The piggies were still just a little bit too jumpy to eat any carrots, but otherwise did very well. It was a good experience for the children and me too. Once I got the boys home and back in their cage, they went right back to their normal behavior. Wilber and Grady will be going to the next youth veterinary camp on September 9th. I was pretty busy watching out for the pigs, making sure they were handled correctly, but I did manage to get a few pictures. 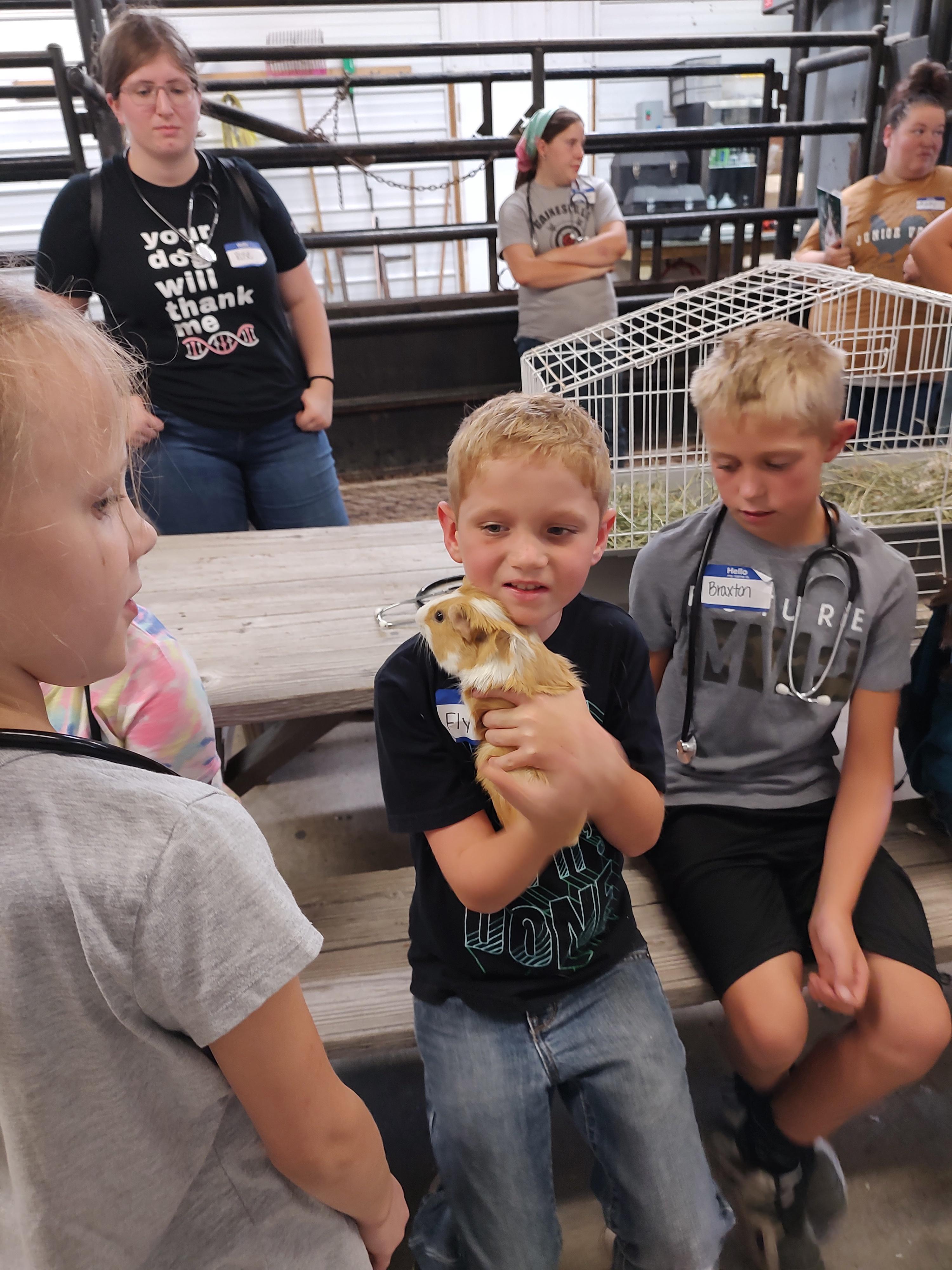 This kid has a pet guinea pig, so he did pretty good with Kahlua, even though he kept trying to run away at first. 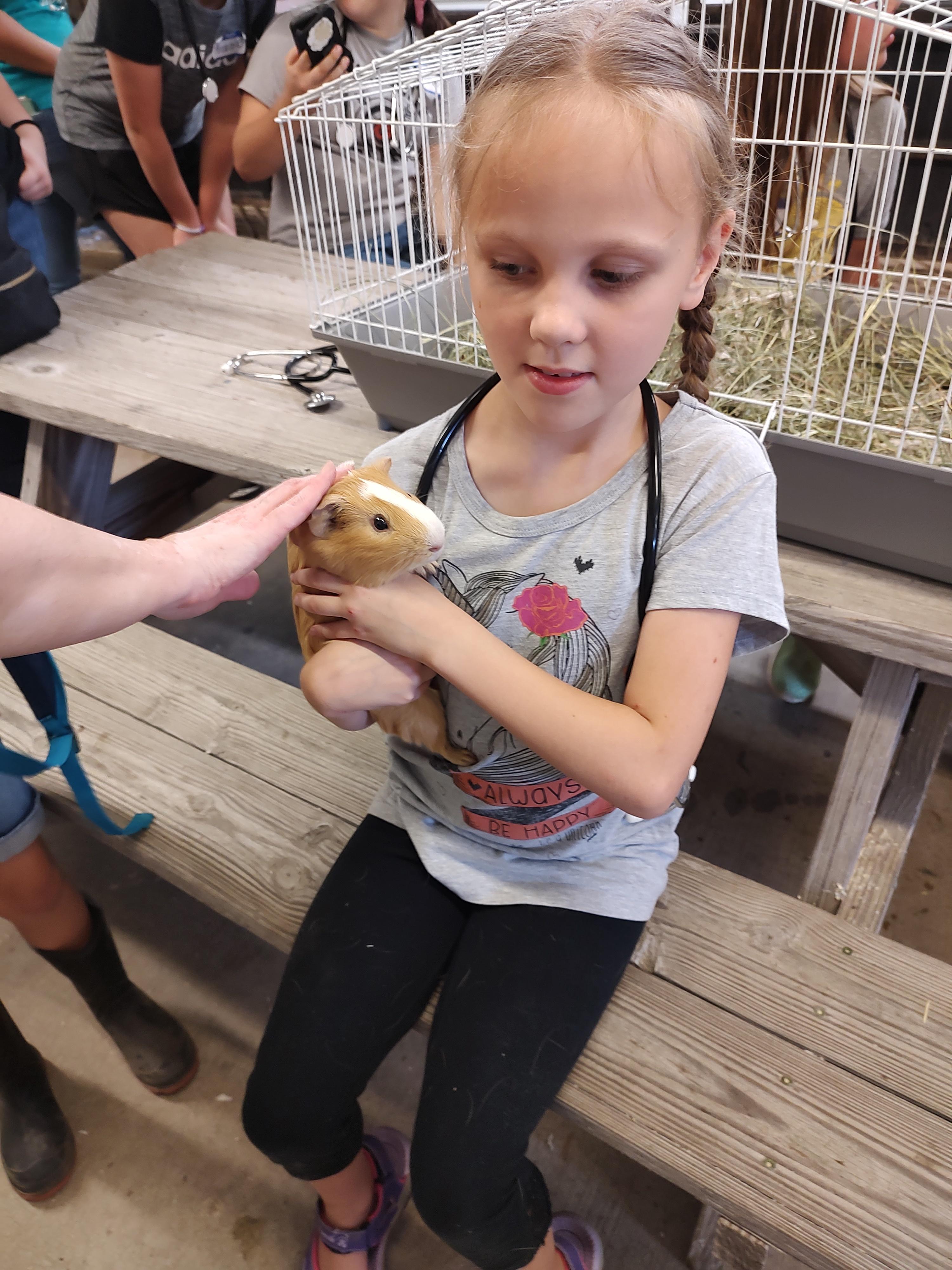 Kahlua had calmed down considerably, but this poor child was afraid to hold him. She did hold on so we could get a good picture. Bless her heart! 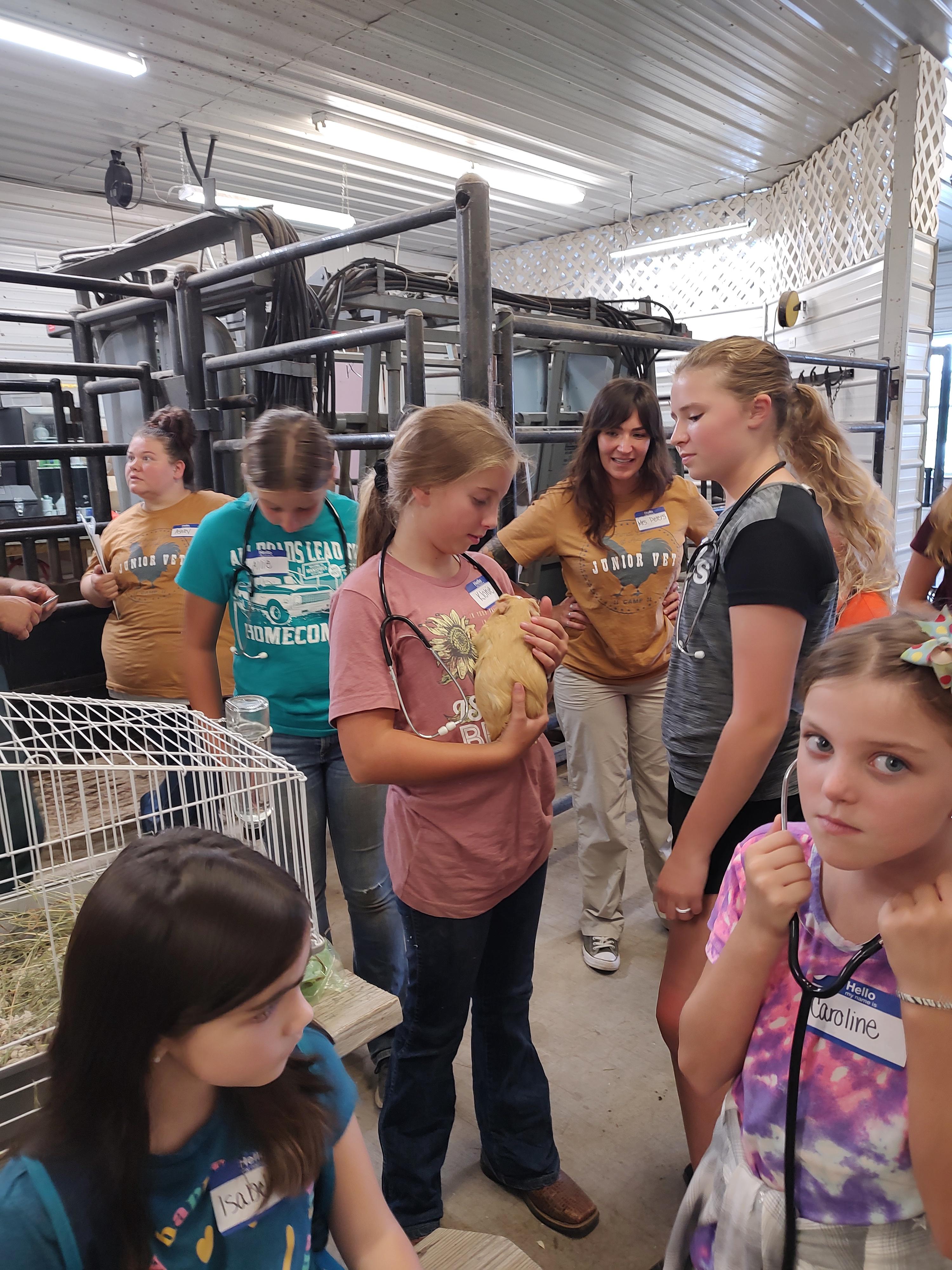 Jack disappeared into the crowd because he was very calm and actually enjoyed being held. I had the vet tech supervise the kids with him since he was much easier to handle.
Top

Cool! I think it is neat you could share your knowledge and guinea pigs!

I do have to say, I would be worried about dropping a guinea pig or having one try to jump out of ones hands. I would be insisting on a grip like the one I mentioned on the handling page.
Top

I kept reminding the kids and correcting them when they held the pigs wrong. I even had to correct one of the teachers who was chaperoning. Mine are usually pretty calm as long as I keep one hand under their belly, all 4 feet and their body against my chest and use the other hand to pet them. They're used to being handled, just not by strangers in an environment they aren't used to.
Top
Post Reply 52 posts


Are you a Guinea Lynx Fan? Tell the world on Facebook!
^
Powered by phpBB® Forum Software © phpBB Limited | SE Square Left Style by PhpBB3 BBCodes
This Document Copyright © 2002 - 2023
* Required Notice:
"Purchases made through our affiliate links may earn Guinea Lynx a small share of the sale."