I honestly think Zachary Binks used to have a partner. He really likes the other guinea pigs. He goes crazy any time one of them is near him. He shows excitement like he misses his buddy and is happy to see them, not aggressiveness. Being at least a two time rescue pig, it's feasible that he was separated at some point. The only other single pig I have is Dean. He had Sammy, so he isn't a total stranger to sharing a cage, but it's been almost a year of him being a single. Not sure if he would accept another partner. He seems happy too, so I'm not sure I want to put him through the pairing process which may or may not work out.
Top

IMO, it wouldn't hurt to try pairing them. If it works out, they'd both be happier. If it doesn't, you haven't lost much.
Top

Zachary Binks is just the sweetest guinea pig. I still haven't been able to put him down on the floor because we had a visitor for the holiday who brought 3 more dogs. They're gone now, so once I get home from the VA hospital in Fayetteville, AR tomorrow and recover from this procedure I should be able to put our dogs on the covered porch, close off my room from the cats and give him a chance to run around in the floor pen I have.

In the meantime, he enjoyed some lap time before I had to go. He likes to grab my glasses and pull them off. So cute! 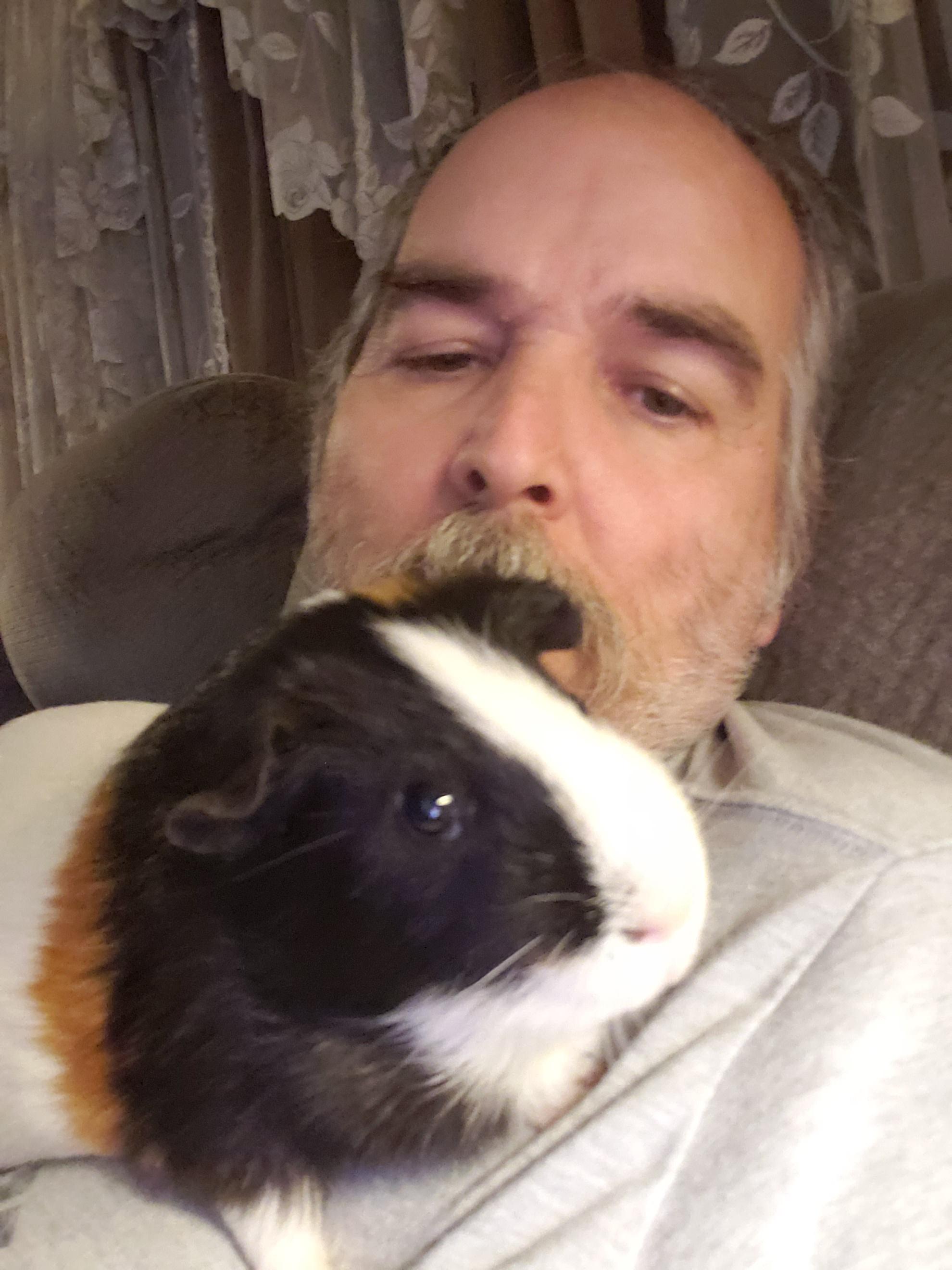 He looks so healthy!

I'll be having it done first thing tomorrow. There is something about Zachary Binks. I can't quite put my finger on it other than that he has a mixture of the best traits of all of my guinea pigs who have passed on. He is an angel. I love him and I can't imagine why people would want to give him away. Oh well. He's my guinea pig now and he's not going anywhere else but with me.
Top

Finally got a chance to give Zachary Binks some time on the floor and he had a blast. He spent a good hour down there running around and exploring. Floor time suits his curious nature. He does the same thing when I hold him. He crawls all over me. It also seems that he doesn't like me to wear my reading glasses because he pulls them off and tosses them. Once he gets them off, he likes to rub noses with me and he gives those guinea pig kisses. What a cute and unique little piggie he is. He actually wheeks for me to pick him up and hold him. I still miss Mr Bubbles immensely but having Zachary Binks really helps me get through.
Top

I remember early on how reticent my guinea pigs were to run around during floor time. Worked better when they had a whole room to themselves.
https://www.guinealynx.info/my-pigs.html
Top

I wish I had a whole big room for them to run around in. I also have other pets, who would want to play with them and wouldn't understand that things don't work out well for the guinea pig when they play together. I have to use the floor pen and close the room off. It's better than no floor time, i suppose.
Top

I totally understand! I think many guinea pig owners have multiple pets they have to enjoy and protect from each other.
Top

Zachary Binks is still plugging away. He's healthy and happy, eating well and has completed acclimated to us. He still has a very strong interest in being with the other guinea pigs, so I found Scruffy s old mirror and put it up for him. 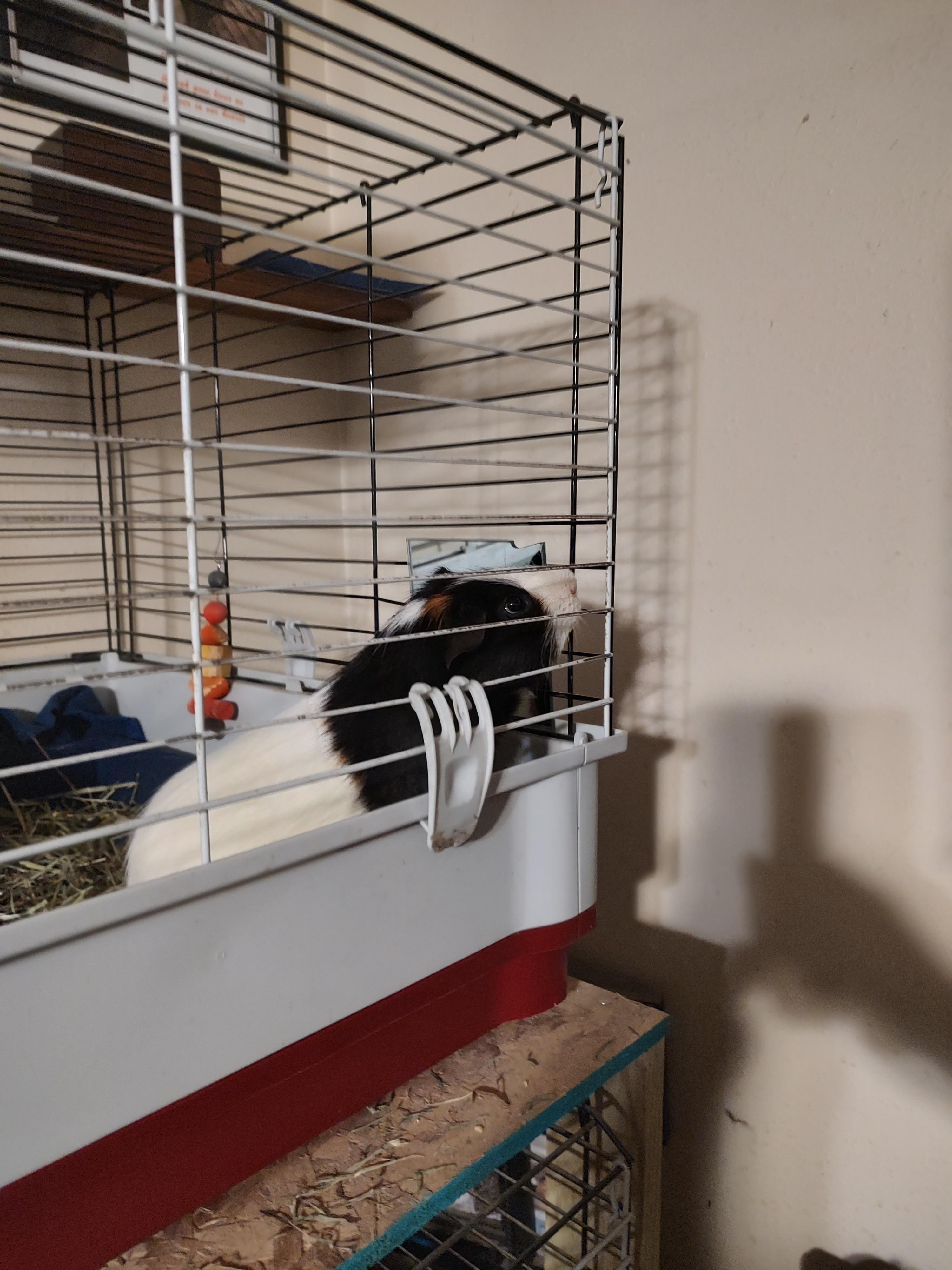 I see him looking at himself quite a bit. Vanity is an admirable trait for a guinea pig. He's become my loudest squeaker too. His hearing is very acute and it doesn't take much to get him going.

I haven't had as much time to spend with my guinea pigs as I usually do lately. It's been mostly just feeding them and changing their bedding but not much lap time. My dad passed away and we've been dealing with that and his estate. I inherited a truck load of personal belongings along with his 2015 Kia Optima. We bought the personal items home, but we're waiting on the probate in Colorado to get the car. Now that it's pretty much done, I've been able to go back to spending the time with them like I used to. They understand and are enjoying it.
Top

Sorry about your dad! Glad Zachary Binks has settled in well and making himself at home! Glad he has company even if it is himself!
Top

I tossed around the idea of trying to pair him with Dean so he can have some company but Dean is getting up there at 4 years old and he's really happy. I don't think it's best to put him through that process now that he's moved on from losing Sammy and gotten used to being a single pig. Besides, Dean really likes being next to the girls and I doubt having a pair of boars next to them would work. The rest of my pigs are paired up and trios don't work with boars. The only possibility is breaking up Wilber and Grady and putting him with Wilber. Those two have been getting after each other more often lately and it's Grady who's the agitator. It's nothing more than chasing Wilber and making him click his teeth. If it gets too much worse, I'll have to separate them.

Judging by the fact that Grady is the agitator and Wilber is such a passive personality, I honestly think that Wilber would pair up with Zachary Binks much easier than Grady. It's kind of funny too that he's noticeably larger than Grady and outweighs him by almost 6 ounces. I guess size doesn't determine dominance with guinea pigs. Zachary Binks is almost as big as BJ was and much larger and heavier than Wilber, but it could work out if I had to pair them since they're both pretty laid back. I'm hoping I don't have to find out. Not sure Grady would do well by himself. He's been around Wilber since they were 5 weeks old.
Last edited by Renonvsparky on Thu Jan 26, 2023 10:56 pm, edited 1 time in total.
Top

I rather think it unusual for a guinea pig to spend time looking at themselves in a mirror! Any clear indication of self awareness? Do you think he interprets his image as a different guinea pig?

It is always hard to lose a parent. I hope some of his personal belongings bring good memories.
Top

I'm not really sure if it's his image that attracts him or the fact that the mirror is shiny and reflects the light from the overhead lamp. All I know is that he enjoys it and that's enough for me. If it is his image, I don't think it would take him long to figure out that it's not another pig. I say that because there's no new scents present. He knows that Gilligan and Skipper are close, but he's used to their scent.

We figured that my dad would pass not long after we lost Mom. He was in the final stage of COPD and not well as it was. His heart broke when Mom passed. You could see it on his face and hear it in his voice. He tried to move on, but he just couldn't. They were together for 53 and a half years. He adopted my older sister and I and raised us as his own. It happens a lot with older couples who spend most of their adult lives together. Often times they go within a short time of each other. I wasn't there like I was with my mom, but I did speak with him the day before and he seemed to be at peace. My brother found him and he said that Dad went peacefully. I guess I can't ask for much better than that.
Top

My condolences on the loss of your dad, Renonvsparky. It’s hard to lose parent because it feels like you lose a part of your past as well. Take care of yourself.
Top
Post Reply 37 posts


Are you a Guinea Lynx Fan? Tell the world on Facebook!
^
Powered by phpBB® Forum Software © phpBB Limited | SE Square Left Style by PhpBB3 BBCodes
This Document Copyright © 2002 - 2022
* Required Notice:
"Purchases made through our affiliate links may earn Guinea Lynx a small share of the sale."