Maloccluded teeth are teeth that have not worn properly and over grow.

Frequently the overgrowth of the front and back teeth occurs at the same time, although it may appear only the front teeth have overgrown. As the ability to chew deteriorates, the front teeth no longer receive normal wear. Typically the bottom molars grow toward and sometimes over the tongue while the upper molars grow toward the cheeks. These overgrown teeth prevent the normal chewing and eating of food and can cause sores and injuries to the mouth.

Some malocclusion is believed to be genetic, especially in cases where guinea pigs younger than two years are maloccluded. Trauma or infection can injure the teeth, predisposing them to faulty growth patterns. Illness combined with changes in eating patterns (reduced intake, soft foods) can allow the teeth to overgrow and lead to malocclusion. Malocclusion is sometimes associated with heart problems.

The guinea pig may have great difficulty eating, only picking at its food or may be anorexic (not eating at all). The mouth of a guinea pig with malocclusion may hang slightly open. By the time most owners notice something is wrong, their pet has already lost a substantial amount of weight and may have what has been called "the slobbers". Since the mouth can no longer close completely (due to overgrowth of the teeth), the hair under the chin may be wet. The most important thing a guinea pig owner can do for their pet is to weigh it weekly! Catching gradual weight loss before your guinea pig is seriously ill and debilitated is essential.

Pinta suggests observing your guinea pig for the following warning signs of malocclusion:

Finding an exotics veterinarian or veterinary dentist who is experienced in treating guinea pig teeth is critical. Many guinea pigs have been misdiagnosed and the malocclusion has gone untreated.

Check The Academy of Veterinary Dentistry ( Member List) to see if there is a veterinary dentist in your area.

Physical examination is often done under anesthetic, although an initial examination may be done without anesthetic. Hillyer and Quesenberry recommend using an otoscope to examine the back teeth, enlisting the help of an assistant to gently secure the animal (one hand at the rump and the other at the shoulder/neck area). A buccal pad separator can also aid in the examination. An instrument known as a bone rounger (lower right hand picture) can be used to clip teeth.

Pinta suggests several things to watch for during the examination:

To view x-rays of a guinea pig with elongated roots and read a discussion on the importance of x-rays in diagnosing various teeth problems, read this thread. 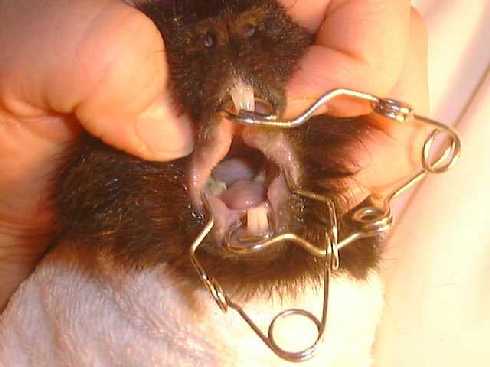 Maloccluded molars are ground and filed (usually under anesthetic).

Front teeth may be filed or clipped. Since it is possible to split and fracture a front tooth when clipping, filing is preferable. Some veterinarians use a Dremel type tool to grind the teeth. In some cases, the guinea pig will need dental work every few weeks.

It is essential that the incisors are not clipped too short. Clipping the incisors too short will interfere with the ability to bite, tear, and pick up food. The front teeth must only be shortened enough to prevent them from contacting the roof of the mouth (if lower incisors) or contacting the lower gums (if upper incisors). To get an idea of the general length of incisors (which will vary from one guinea pig to another), see the Broken Teeth page.

Cheryl Hustwith's rodentologist showed her how to maintain the teeth of four of her guinea pigs who suffer from ongoing dental problems. The buccal pad separators (pictured above) and a dental file (not pictured) were obtained from the Cambridge Cavy Trust. These tools were designed by Vedra Stanley-Spatcher and can be obtained directly from her in England. The bone roungers (used to clip the teeth) from Timesco. The larger of the two buccal pad separators holds open the front teeth while the smaller one is used to hold open the cheeks. The guinea pig is firmly wrapped in a towel during the procedure which is done in most cases with no anesthesia. The CCT reportedly offers a lecture on dental work to members.

The teeth should be planed at a 30 degree angle.

See a sketch of the teeth illustrating the 30 degree angle and photographs of Paravati's guinea pig before and after dental planing.

Other dental problems can cause an animal to stop eating.

Pinta has had numerous guinea pigs with dental problems treated by a skilled veterinary dentist. She responded to a few questions about tooth care on the medical board:

Is molar planning the same as filing?

Does the guinea pig need to go under anesthesia each time?

How does this monthly surgery affect an older guinea pig?

Is the treatment for elongated roots the same as for overgrown molars?

Misalignment of the Jaw:

Pinta writes: Sometimes the jaw gets "locked" by getting stuck on a ridge. When this happens it feels locked. You should be able to move it back and forth and from side to side.

An animal physical therapist can manipulate the jaw back if it's misaligned. If your vet understands the problem, she could possibly manipulate it into position. When I showed my vet the problem with my pig's jaw and described what the therapist did, my vet could manipulate the jaw. The therapist gently rocked the lower jaw back and forth until it clicked into position. Quinn has to wear a Chin-Sling with a pad to keep her lower jaw in position 5 nights a week to keep her jaw in alignment. I believe she has TMJ on one side.

When the pig is sedated all the muscles relax and the vet won't be able to tell if the jaw is misaligned.

A heat treament (warm towel) followed by massaging the jaws with an electric toothbrush could help to relax the muscles.

Many vets prefer using anesthetics. One of Pinta's pigs had heart problems and could not take the stress of unsedated dental work. Her dentist routinely uses isoflurane gas and has developed a method of supplying a constant flow to the nostrils. In order to lessen the pain related to the dental work, she has used rimadyl as a short term pain reliever (1/12 of a 25mg tablet once a day for a 2 pound pig).

While malocclusion is often due to genetics (or as previously mentioned, due to illness, injury or infection) it has also been postulated that ligament and muscle weaknesses contribute to malocclusion. Some guinea pigs have responded very favorably to a new treatment using a flexible jaw sling to hold the jaw in position keeping the upper and lower back teeth in contact with each other. The even pressure and resistance allow the teeth to grind against each other and help the guinea pig regain jaw muscle strength making future dental planing unnecessary. This treatment works best after an initial planing of overgrown molars.

Case studies of the Chin-Sling can be found at this site. 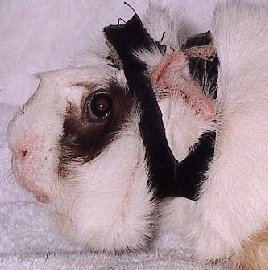 Links To Information On Malocclusion And Its Treatment