JHand recorded the weights of a number of pups on a daily basis. These weights may help you determine what is normal weight loss and gain in newborn pups and determine when hand feeding is necessary. Caruba also recorded a few weeks of weight gain for 4 pups and assembled a chart to illustrate it.

When Butter gave birth to 4 pups on Easter Sunday, I started charting everyone's weight. They start out relatively light (compared to what I've read) but gain weight nicely. Thanks to the chart, I noticed that Caramel might benefit from some extra mom-time around day 3, so every once in a while I took the others away briefly so she could nurse in peace. The chart is for almost 3 weeks, and I hope it might be useful.

I have now switched to weekly weighing. Here are the four of them together: YouTube Video

The two male pups found a great home via shelter adoptions when they were three weeks old. I decided to adopt mom and the two females (Mocha and Caramel).

Here you can see Mocha being born. YouTube Video

We were all very lucky that everything went well. Thankfully, no one will ever breed Butter again. She's been such a great mommy, but it's been very stressful on her. 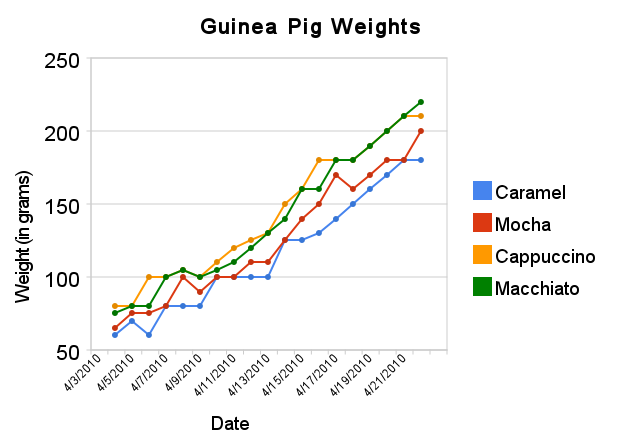 Marianne's litter was 5; one was stillborn. The remaining 4 were very healthy. Pecan attempted to eat lettuce only hours old. All were eating veggies by 2 days old and at least 2 had eaten pellets. They also attempted hay. On their 2nd day, they were all fully exploring their world. Popcorning started in earnest by 3 days old.

Ginger's litter was also 5; 2 were stillborn. Rosie, the one that died, showed interest in Kale in the first hours, but on the 2nd day, noticed she was the most timid. In general, I observed that Ginger's babies were less adventurous than Marianne's at the same age, especially Rosie; She seemed so small to me. According to my notes, I started hand feeding Rosie on the 5th day. On the 6th day, she seemed to be doing better, but then she aspirated some pedialyte, and died within 30 minutes, probably less. It was so heartbreaking.

Legolas and Gimli didn't gain weight was quickly as Marianne's babies did, I watched them like hawks and their activity level was always good, so I never chose to hand feed them. In hindsight, today, I probably would have supplemented with Critical Care.

As far as I know all babies are happy and healthy.

Briar Rose was a foster sow I had that delivered in my care. Her babies were all very healthy and active; even Fiona. She had been gaining weight and acting great until the evening of July 27, I knew then she probably wouldn't make it. She died 8:15 a.m. on the 28th of July; cause unknown. 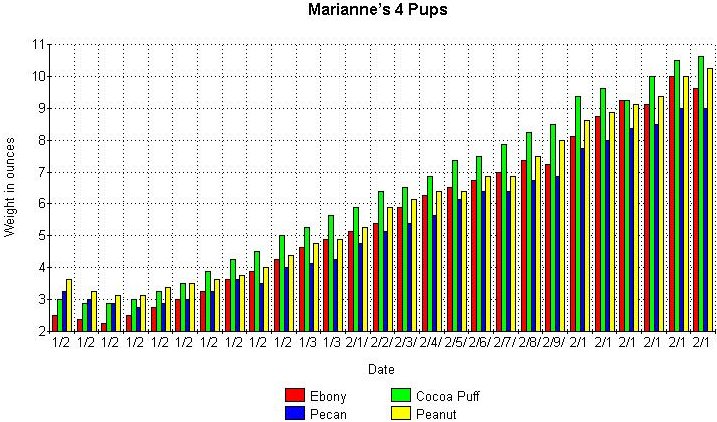 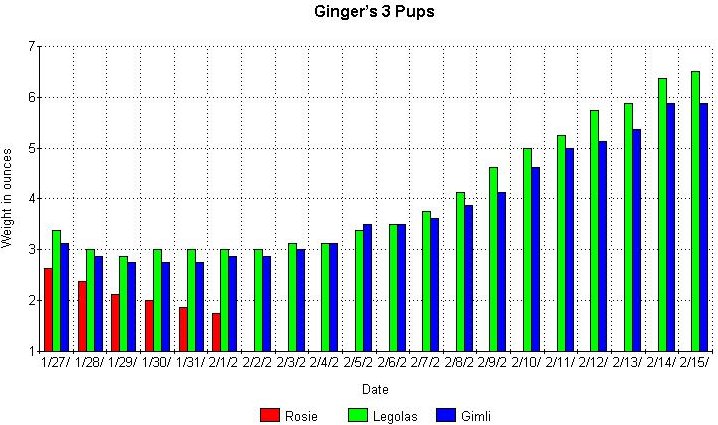 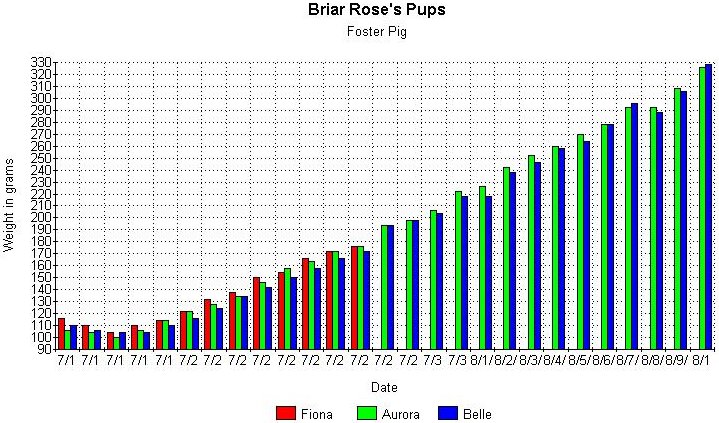 And thanks to Crittermom for these graphs!

SardonicSmile observed drops in weight in the first few days for all her pups. She wrote:

They all started to gain weigh from day 4 onwards.

This pattern of initial weight loss can be seen in the experiences of the other contributors on this page.