Pregnancy and delivery are difficult for guinea pigs.

The babies are born large, fully furred, and ready to run. The mother generally carries several pups and her weight may double, putting stress on her circulation system and other organs. Even with the best care, sows can suffer from dystocia, hypocalcemia, a prolapsed uterus, or pregnancy toxemia.

For the health and well-being of your beloved pet, do not breed!

Near the end of her pregnancy, Dutchess (a rescue) could barely move. She delivered 6 pups in a back-to-back pregnancy. 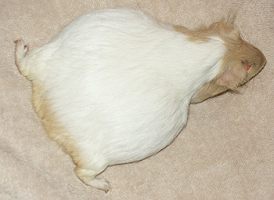 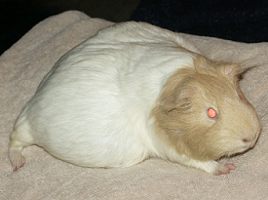 Thanks to mmercedesmom for the photos of Dutchess.

If you have accidentally purchased a missexed pair of guinea pigs and the sow is pregnant, remove the boar immediately. A sow that has just delivered can become pregnant soon after giving birth. A male guinea pig must not be present during the birth for this reason. Back-to-back pregnancies are extremely hard on a female guinea pig and not advised.

Female guinea pigs can be sexually mature as early as 4 weeks of age.

Given the early ages at which some males and females are sexually mature (females have reportedly been impregnated by 24 day old males), it is advised to remove the male young by 3 weeks at the latest. The earliest dates of sexual maturity are reported by V.C.G. Richardson in the 2000 edition of "Diseases of Domestic Guinea Pigs" on page 15:

While not all males may be fertile this early, the safest action is to separate the males from females by 3 weeks of age.

Pregnancies of very young sows are also difficult for the animal. Food for her developing and maturing body is diverted to the young fetuses. While intentional breeding is never recommended, young guinea pigs can successfully carry to term. Too often pet stores mix sexes, resulting in unintentional pregnancies.

Breeding after 8 months of age can be fatal for a guinea pig that has not had a previous litter due to dystocia. The symphysis (a joint of tough fibrous cartilage which firmly joins the 2 pubic bones) becomes less flexible upon reaching adulthood and may not separate fully, making delivery difficult.

Sows with dystocia usually need a caesarian section. The survival rate is very poor. Spaying or neutering guinea pigs also carries risks even when performed by an experienced guinea pig veterinarian. The safest choice is to keep the sexes separate or have only sows or boars. Sows who become pregnant at an older age can sometimes deliver successfully but because of the added risks, pregnancies should be avoided. All pregnancies carry risk.

If your older sow has become pregnant, the safest course is to allow the pregnancy to procede normally but line up an experienced vet in case there are complications. Another alternative is terminate the pregnancy. All surgery also carries risk.

"Your pig is in estrus when the mucous plug is dissolved. The plug seals the vaginal opening when she is not in estrus. The plug will dissolve approximately every 10 to 21 days. To check if it's dissolved, just see if the top of the "y" is separating to create an opening. It's open approximately for 24 hours and then it starts to close or plug up again."

The sow stops eating, becomes depressed, and adopts a hunched, ruffled appearance. She may salivate profusely and the characteristic smell of ketones can be detected on her breath as she becomes ketoacidotic. The condition progresses to muscle spasms and death. The signs often occur abruptly. Pregnancy toxemia is more prevalent in hot weather.