Are you positive about the sex of your guinea pig?

Make absolutely sure your pet has been correctly sexed! If you have more than one and plan on housing them together, ensuring that both pigs are the same sex will avoid the many pitfalls and risks associated with pregnancy.

Pet stores are notorious for sending home two "same sex" guinea pigs that are anything but, so check yourself or have a vet check your pigs for you. Should you determine you have a male and female, separate them immediately whether you suspect the female is pregnant or not.

Boars (male guinea pigs) are generally larger than females, have smaller nipples, and when sexually mature, clearly visible scrotal pouches. Gently pressing on the belly near the genitals will allow the penis to emerge.

Sows (female guinea pigs) have a Y shaped opening which is usually sealed with a vaginal closure membrane, according to Harkness and Wagner. 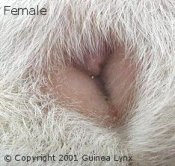 Pups (young pigs) can be difficult to sex. Waiting until two or three weeks of age may allow the pig to mature enough to make a determination easier. Small young male pigs have a donut shape to their rectum, totally round or slightly oval, and at the top of this donut, a little dot (sometimes described as an "i"). Some people find they can feel the ridge of the penis under the skin just above the genitals.

Or place your index finger and thumb on either side of the genitals, gently spreading the area -- not much happens with a boy, but with a sow a definite Y appears and the base of the Y (under the "V") will spread quite a bit. Some females will have what has been described as a "pimple" (which might be confused with the dot described above). 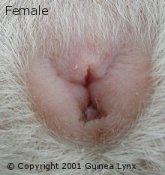 Another method is to place your finger directly above the opening and push inward and slightly downward, gently but firmly. If absolutely nothing pops out then it is likely to be a female. Determining sex of a very young guinea pig can be a challenge because their genitals are so small. If you have an opportunity to examine a few pigs, it may be easier to see the differences when you have both sexes to compare.

Gvstate01 explains how to extend the penis: "There is a very pronounced bridge above the penis, like a hard vertical line. Start the farthest from the penis on the ridge and gently push down and forward toward the penis and it should come out."

One of Pinta's hints is that sows pee outward and boars pee inward.

LINKS!    Still confused? Be sure to check the Cavy Spirit sexing page, which should answer any questions you have. Teresa Murphy provides numerous pictures of young, mature, and neutered guinea pigs.

Another site with extremely detailed pictures clearly showing what you should be looking for to distinguish a male from a female guinea pig is www.pet-informed-veterinary-advice-online.com/sexing-guinea-pigs.html. Guinea pig images are of adult intact guinea pigs.